On November 13th 2017, CNN broadcasted a report on migrants crammed up in holding centers where they were beaten, humiliated and even sold by auction in Libya.

Unfortunately, time passes by and we forget. The emotion caused by this video disappeared to the point that the conclusions of the inquiry that should have clarified human rights’ violations on migrants weren’t pronounced, against a background of general indifference.

This fact is even more detrimental as the awareness that seemed to emerge should have highlighted something else: governments that were denouncing these inhuman acts back then, turned a deaf ear to it during a few months, in spite of warnings from NGOs and public personalities.

In spite of many warnings, in July 2017, the Ministers of Foreign Affairs reinforced cooperation with Libya, that had been settled since march. This decision was taken without consulting the European Parliament regardless of elective representatives’ denunciations, particularly the ones from the political group Greens-EFA.

The situation worsened because of Italian elections, as the new chief of Italian diplomacy reactivated a goodwill treaty signed between Silvio Berlusconi and Mouammar Kadhafi. The latter allows the expulsion of migrants coming from Libya and strengthens Italian military presence in this state, despite international law.

The tragic Aquarius episode let us hope that the Italian government would become isolated at the European level, but the fact that Libya and the European Union weren’t transparent about the spending linked to the operations mentioned in the treaty, revealed an exclusively fake “humanist” discourse from the other members of the Union.

Therefore, the outsourcing of the responsibilities for welcoming people in danger is occurring not only at the European level – as shown by the results of Salzburg’s European Summit from September 19th to 20th 2018 – but also at national levels with Dublin procedure.

According to Dublin Regulation III, an application for asylum might come under the jurisdiction of a different European State than the one in which the person wanted to apply for it. In this case, the asylum seeker would fall under Dublin procedure and could be sent to a country that can’t guarantee his/her fundamental rights.

In a judgement on January 21st 2001, the European Court of Human Rights (ECHR) underlined that Greece didn’t have an efficient asylum system, i.e. this state can’t guarantee an access to asylum procedure, nor acceptable reception conditions for asylum seekers, nor efficient pleas against human rights violations.

On February 28th 2017, the ECHR also sentenced Hungary because its authorities were detaining and deporting migrants against the Convention for the Protection of Human Rights and Fundamental Freedoms.

Instead of considering the judgements, France decided to increase the referrals by 159% in accordance with the circular of December 7th 2017 and law allowing a good application of the European asylum system promulgated on March 20th 2018.

As soon as the law was promulgated, French Young Greens (Les Jeunes Ecologistes) decided to file a complaint against France to the European Commission in order to denounce this policy through various accusations: the vulnerability of the people detained before their transfer and the systemic failures of the state to where the individuals seeking an international protection in France are sent back were not considered, and the solidarity principle between European Union member States wasn’t respected, letting a heavy reception pressure on states located at the borders of the Union.

This complaint was rejected on May 19th 2018 appealing to “competent national authorities”.

On November 4th 2014, ECHR judged that migrants couldn’t be transferred to Italy where reception conditions are not in compliance with the special protection that should receive asylum seekers as a particularly disadvantaged and vulnerable part of the population, unless by violating the article about the prohibition of inhuman and degrading treatments.

For years, from Libya to France or Italy externalization of borders in Europe is the story of migrants’ rights denials; today it is also a story of States impunity.

Thanks to La Souris Verte (French Young Greens Journal) and Célia Da Costa Cruz for giving us the right to translate this article for our special online edition. 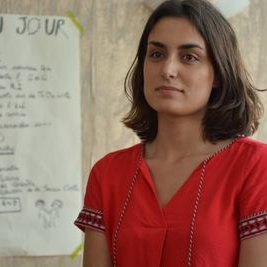 Célia Da Costa Cruz is the former co-spokeperson of the French Young Greens (Les Jeunes Ecologistes). She works in a holding center for asylum seekers in Paris.