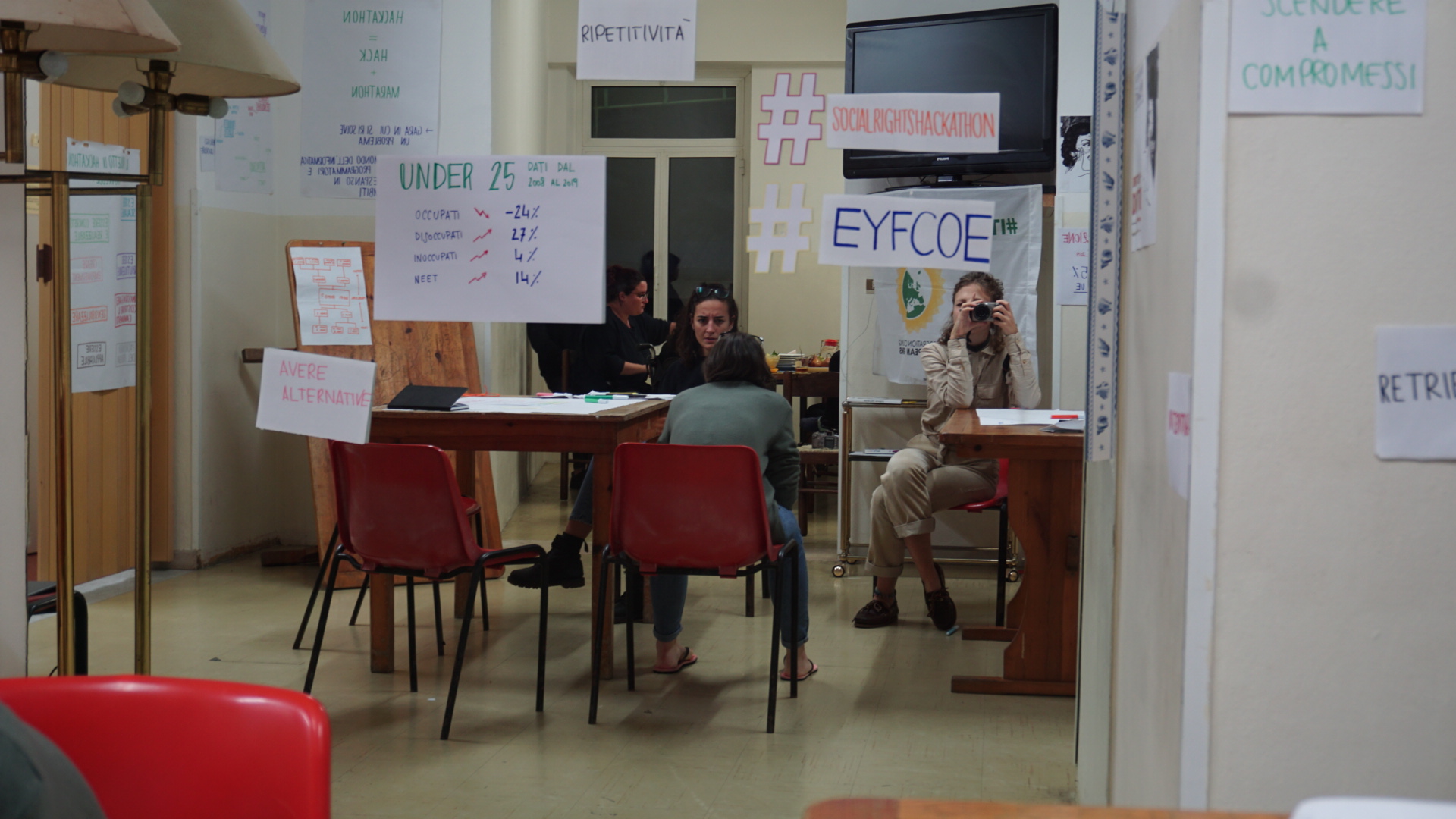 HOLD YOUR HACKATHON ON SOCIAL RIGHTS

This guide has been created for those who wish to organise their own local hackathon on social rights. Based upon the experiences of the organisers, it collects multiple tips and tricks and also serves as a general project-management resource for organising youth events based on non-formal education principles and inclusive sharing of knowledge.

CZECH REPUBLIC. Housing is a right! Hackathon on affordable housing

The hackathon organised by Czech Young Greens produced diverse outputs. One of the groups came up with the strategy plan to recuperate an old abandoned house, former hospital for terminally-ill patients, and transform it into a public space for the community. Another one conceptualised a public art installation of an empty flat to condemn escalating rent prices and the citizens’ alienation that’s carried over with them.

The Scottish Young Greens tackled the housing cri-sis in Scotland, with a focus on homelessness, lack of social housing, rent poverty and rogue landlords. One of the projects visualised city tours to share the history of derelict buildings and of gentrified areas, like beautiful structures in Glasgow which are bought and then mysteriously set on fire or let alone to rot. Another group created an informative poster maps to be placed on the street, to point rough sleepers in the direction where to get services.

The increasing pressure on housing in the UK is felt acutely among young people and London Young Greens chose to tackle the lack of information on renters’ rights. They produced a series of interactive resources, such as adventure games, web quizzes, videos, sticker designs and soft advertisements. All these will be uploaded on a website to be launched at 2020 Winter Gathering, to enable young people to understand the landscape in which they are living and push them to demand more from their landlords.

Activists in Italy dug into the national housing and working crisis. Out of it came TheOtherCity – an anti-gentrification touristic city map, a blank and customisable template shareable on Canva, which can show tourists places that don’t feed into the gentrification patterns of typical European cities. The second product is a radiophonic theatre script set in an imaginary world of reversed discrimination, which sparks thoughts on the normativity that rules over working environments.

Polish Young Greens focused on the failing education system in Poland during their Turning Chaos into Progress hackathon. The groups gave life to various campaigns to raise awareness about the problematic school system in Poland and encourage self-governance initiative in schools, with an ad hoc social media campaign. The event was also fundamental in inspiring people’s interest and getting participants to join the new working groups created by the Polish Young Greens.

UKRAINE. Democracy Begins from a Community

Purely Berdyansk’s hackathon was the perfect occasion to brainstorm and expand on project plans to propose to the city, which gives students the opportunity to take part in the urban participatory budget. One of the projects out-lined the creation of an open community hub to organise peer-to-peer classes on different topics and with a joint fee system to enable wider accessibility. A special bonus was the opportunity offered to the organisation to use the venue of the hackathon in the future as a gathering and event space!

SERBIA. Youth at the frontlines of social justice

Activists at Serbian Green Youth gathered young people to discuss the main struggles of young Serbians. After identifying a trend in recreational use of drugs that shifted from subculture to main-stream culture and looking at recent statistics showing that 1/3 of young people that have used drugs didn’t know what they were taking, they decided to develop a website to provide reliable in-formation about the different substances.

The Georgian Young Greens gathered in Tbilisi in a moment of high political distress for the country. They mapped privatisation as source of social inequality in Georgia and prepared the ground for hackathon projects. However, the widespread opposition to the government and the ongoing urban protests kept everyone busy and disrupted the event. Despite this, the hackathon team continued working to create a Facebook page with graphics on the topic and support their communities.