June 2016: there will be elections in nine months. DWARS’s freshly formed campaign team holds their first meeting. What are we going to do during the next three-quarter year and how? Before we started this, I had promised to bring a pie. ‘But,’ I said, ‘not without a reason. We need to have achieved something.’

A look back at the campaign, by DWARS-campaign manager Sjors van Broekhuizen.

But will you do that, ‘achieve something’? DWARS has a lot of ambitions, but not a lot of money. We want GroenLinks to become the largest party among the youth, we want a viral video, we want to reach national media… And we only have 5000 euros to spend.

We immediately decide to do the campaign in a different way compared to GroenLinks. Younger, more playful. We have to add something, otherwise we can register ourselves as volunteers for GroenLinks. We need to spend our time efficiently: we aim at left-oriented, highly educated, youth living in large cities + juveniles that will be voting for the first time. We need to assume our enthusiasm, manpower and the sympathy that GroenLinks is currently enjoying (50% of the Dutch population claims to have sympathy towards us).

A garden gnome protest failed, because we could not afford it

It’s still very hard, with money as a limiting factor. Ideas like printed toilet paper, fair scratch cards, covers for bike seats, play cards in a printed box and a garden gnome protest failed because they were not affordable.

Also, our own principles could form an objection. Together with local DWARS departments we come up with a money oriented action. Handing out chocolate coins with a message about fair incomes and fair taxes. Great idea! But the plan falls because chocolate coins are not fair trade. It feels unfair. At the VVD (largest right-wing party in the Netherlands), they have money and don’t have principles. Campaigning should be so much easier over there.

Differences between DWARS and GroenLinks are unrelenting. GroenLinks wants to abolish the deductible. It’s something you can campaign with in a very strong way. But officially, DWARS does not agree with GroenLinks. You can say goodbye to that potential stronghold.

So, you have principles, an opinion and no money. How will you be campaigning then? I don’t think there’s one answer to that. During our second meeting we already decide: the things we do, we have to do them well! And otherwise, we don’t do them. Between June and October we meet once every two weeks and think about activities we can do, videos we can make, images we can spread via social media.

The result: In November we have a complete list with ideas we can execute between the start of January and 15th March every week. But it’s still a lot of work to get everything done in time. Months of work and struggle start.

Jesse, I choose you!

The elections are over now. What did we achieve? Our most appreciated action, both by enemies and friends, is our Pokémon video. Completely stylized as the Gameboy game Pokémon Red, we could let a video be made cheaply, in which our Jesse Klaver is facing the right-wing populist Geert Wilders. Our goal: to generate publicity towards the youth for Klaver as the opponent of Wilders at an early stage. Jesse, I choose you!

More than 3.000 likes and 250.000 views later, we can say that this was a great success. The video was shown in the Dutch talkshow RTL Boulevard, the popular youth vlog #BOOS and the major national newspaper De Volkskrant.

Because this was a success, we invested more in video material. We filmed during an action in which we built a refugee centre in the miniature park Madurodam. Or a Star Wars opening crawl with our GroenLinks text. We made a video in which children (the future) answered questions like ‘what will you do when your classmate forgot to bring his lunch along?’. And we edited video materials of politicians, so it seemed like they were saying that they agreed with GroenLinks. Everything was good for almost half a million views via our own channels.

But there’s more to life than internet. We went out on the streets. I mentioned Madurodam. At Trump’s inauguration day we handed out earplugs against right-wing screams. Some local media picked this up in a positive way. 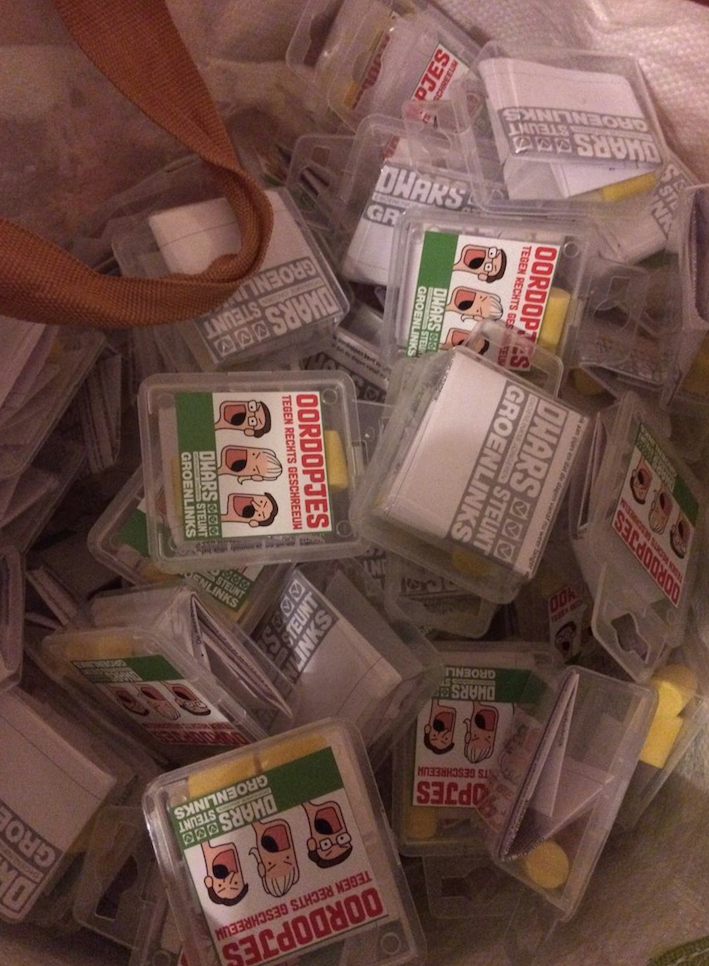 We had a comparable action every day during the week before the elections. In twelve different cities we handed out (paper!) bags with candy coins. In the bag was a note saying: we are handing back tax money. We all have the right to get it back because multinationals like Google, Starbucks and Ikea are hardly paying any taxes. This has to be fairer, so vote GroenLinks.

Pro: this works better than handing out flyers. People are more likely to accept it (because: candy!) and they are more likely to stay and talk. Con: because we did not have a lot of money, we had to order everything (bag, candy, note, sticker) apart and fill, fold, sticker, count and spread thousands of bags ourselves. We spent 50-75 estimated hours of work on it. And then they need to be handed out.

I can go on and one about everything we did, but I hope this gives enough insight in our campaign. With around 100 volunteers we the made viral video possible, we made it possible to appear in national media, we made it possible to be visible in the entire country. Concluding: just before the elections, I could bring a pie along for the tea.