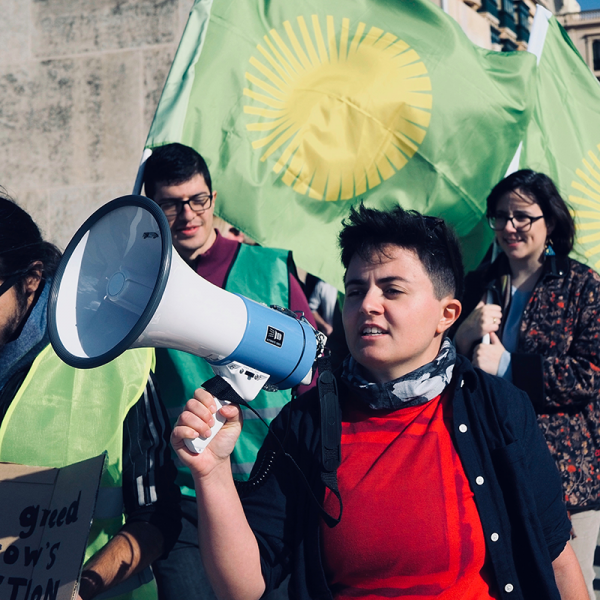 We talked to Mina Tolu, newly elected co-spokesperson of the Federation of Young European Greens during the Federation’s General Assembly in Istanbul.

Mina is a 28-year-old trans, queer, Green and feminist activist from Malta. They were a young candidate during the European Parliamentary elections of 2019.

Mina has almost a decade of experience in communications and campaigns which they gained from four years at University, some work with LGBTQI+ organisations on the national and international level, coordination of a national referendum campaign, and most recently, FYEG and their own European Parliamentary (EP) election campaign.

They are interested in human rights, social justice, sexual and reproductive health and rights, and they believe in a sustainable, social and inclusive Europe.

One month ago, I would have told you that I feel drained, but now I feel better and I am ready to take on new challenges. In these last months it has been important to me to rest and reflect on both my own campaign and on FYEG’s ‘Be Brave, Green Europe!’ campaign. It is often difficult to find time to reflect and it is important that we do, as through proper evaluation of campaigns we can learn and understand how our campaigns can have more impact in the future.

My success lay in challenging the discourse on topics like abortion, stigmatisation and feminism. However, as far as elections go, since I wasn’t elected, they weren’t successful.

My high point and low point occurred at the same moment. In February, before the campaign truly kicked-off across Europe, I did a Facebook Live to talk about abortion and stigmatisation. The reason I did this was because the Abortion Support Network had announced that they would be offering support to people in Malta to access abortions in other countries. This kind of news would often elicit reactions, but some newspapers, and in particular politicians were completely silent, whereas the comment boards online exploded. Speaking up was a highlight, as it was one of the reasons why I decided to campaign, to not stand by and say nothing when we could be using our voices for good. Unfortunately, while I did receive a lot of support, the backlash against me was much bigger. I realised later that it made me very self-conscious about recording videos, and this meant that I avoided the camera for a while after.

There is so much room to improve! This was my first campaign as a candidate and in many ways I experimented with different things, and some worked better than others. I am sure that I could build on this experience to coordinate better campaigns (whether for me or for others) in the future.

In your opinion what methods worked at getting people out to vote?

Some people said they voted for me because of my positive vision and because it was clear that I would not compromise human rights and the environment. Clearly, it wasn’t enough, but it is a good legacy to build on.

Where do you see yourself in five years? Will you run again?

When the campaign ended, despite the result, I knew that it would be something that I could consider doing again in the future. Whether that is in 5 years time, or sooner, or not at all, depends on a lot of different circumstances along the way!