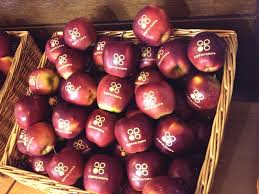 After happily waking up in the cheapest hostel of Warsaw, our FYEG delegation headed energetically to the UNFCCC conference. The day started with our daily YOUNGO (the umbrella group where all the youth delegations work together) spokescouncil, a meeting where we report our working group efforts and go through the daily agenda together. As good climate activists we of course moved all the chairs to be able to sit on the floor in a circle and prepared ourselves for our first day. After that we split working group meetings including communications, intergenerational equity, market mechanisms, finance, etc; where we coordinate actions on certain topics (speeches, lobby, and direct actions).

Next, as we walked along the corridors of the Warsaw stadium accommodated to facilitate the COP to go see the plenary opening speeches, we passed by interesting features and facilities including Flying Emirates bin bags, coal organisation booths and apples carved with the COP logo.

After three minutes of silence called by China for the victims of the super typhoon in the Philippines, Yeb Sona (Philippines delegate) gave an extremely emotional speech about the fate of his people and our task here at the COP (vimeo.com/79117298). He left the plenary shortly after, followed, as a sign of solidarity, by the YOUNGO delegation including myself. As we were doing that, I was suddenly given a sign by a fellow youth delegate just when three other young delegates were being arrested by the UN security for holding a solidarity banner in a ‘non-action area’ and without a 24-hour notice (these three delegates were later debadged for the day). The action then stopped and the rest of the crew followed Yeb into a press conference.

After hiding my sign, I decided to go find some food and headed to the cafeteria only to discover that the meal of the day was spicy chicken. By the way, there is no recycling bins anywhere. I am glad the official slogan of this COP is ‘I care’.

The rest of the day involved spending three hours working on a plenary intervention speech on loss & damage. However, as the end of the plenary approached (and most of the delegates had already left) we were denied our right to give the speech and had to leave the plenary with all our work wasted. So much for youth representation.

In the meantime, riots led by extreme-right nationalists erupted in the centre of Warsaw (I forgot to say it was Poland’s national day). Tear gas and rubber bullets were fired by the police and the infamous rainbow residing in one of the main squares of Warsaw was burnt down by protesters for the third time since its inauguration.

Despite all of that, at the end of this first day came the official COP party to which all the delegates including YOUNGO were invited. So, ignoring the protests, we got on the venue buses and headed to the party to find some greatly-needed food and drinks. We were received by the Mayor of Warsaw who had apparently decided that her city being under flames was not a priority. The party was however very entertaining and involved some ‘inspired’ dancing with some other young delegates and even a few African delegates (they rock!). We then headed back to the hostel to catch a few hours of sleep before getting up for our second day.

Despite all of these events I remain extremely motivated and determined to have an impact here at the COP, and look forward to the remainder of these two weeks. People are dying everyday because of climate change. More than 10,000 people died last week in the Philippines. There is no choice, as Yeb Sano says we have and ‘we can stop this madness’.