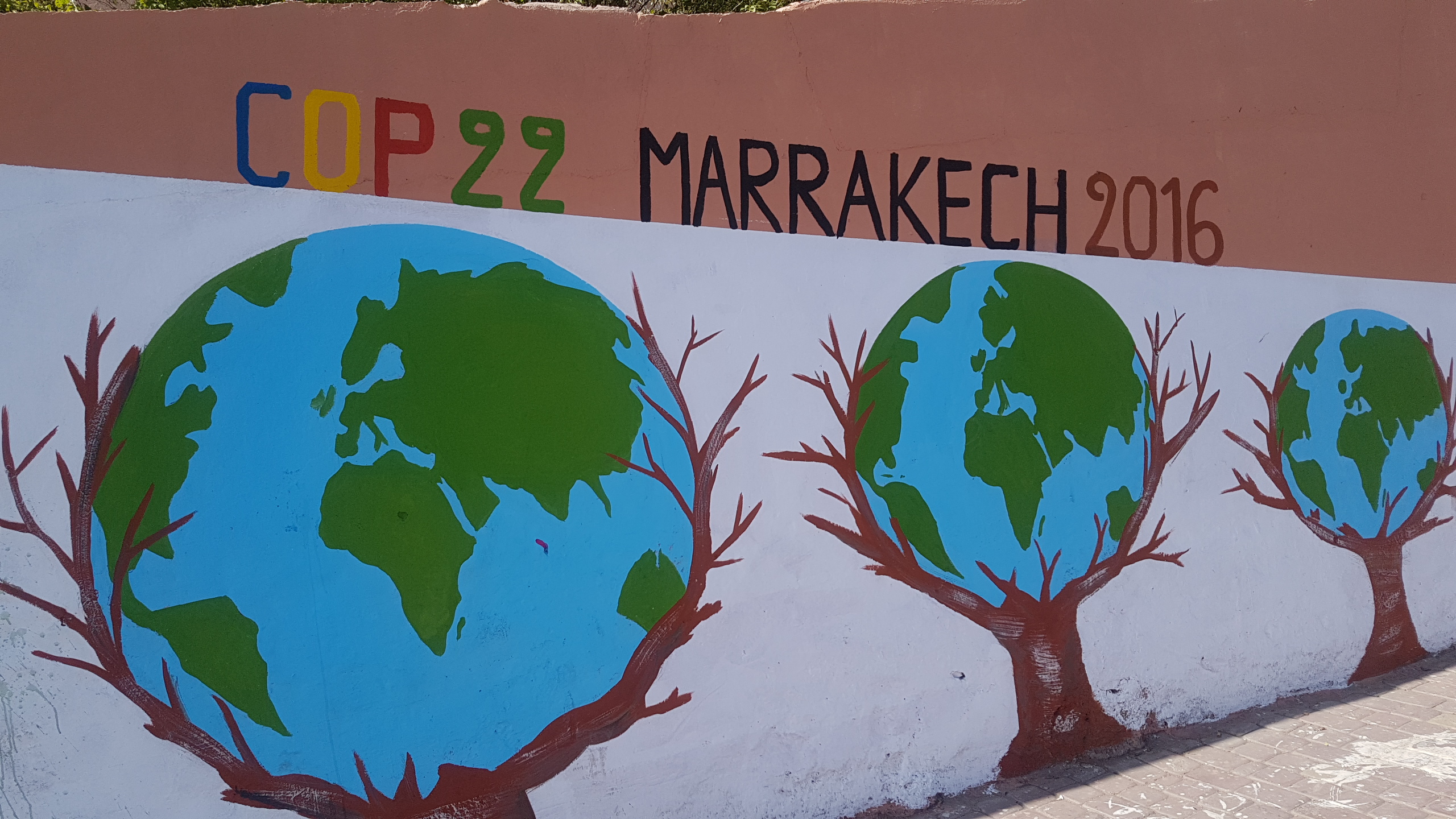 Climate change has once again become the focus of global diplomacy last week as countries gathered in Marrakech, Morocco for the UN (United Nations) climate body’s (UNFCCC) 22nd Conference of the Parties (COP22). I was lucky enough to be chosen as a delegate to the Federation of Young European Greens (FYEG) AlterCOP22 climate camp. Attending the climate conference last week proved to be challenging, not just for the group but for the global sustainability impact of the conference and its effect on the wider climate debate.

The first week appeared to be overshadowed somewhat by the victory of Donald Trump in the White House. The atmosphere was sombre and thoughts of the Trump election as a global climate and equality disaster filled the air. Announcing plans to divert ratification of the newly launched Paris Agreement throughout his campaign, anti-sustainability  and climate-sceptic Trump has left COP22 wondering whether the large financial targets can be met without America. This has led many COP22 delegates feeling as though the Paris Agreement although only a year old and a clear roadmap for governments’ actions, may already be flawed as it relies on each country’s individual contributions and only focuses on short-term goals.

It was brought starkly home to us on multiple occasions that the rest of Europe and the world feel that Brexit paved the way for Trump’s election. We are witnessing a changing force in the political spectrum, the rise of right wing populism, the breakdown of political differences over the means of production, and a widening divide in immigration and globalisation. But despite this, there is a glimmer of hope in China. Emerging as the global climate leader in the wake of Trump’s triumph, Chinese officials have made clear that their visions lie firmly in a low-carbon future. As Liu Zhenmin said in Marrakech, any change in US policy ‘won’t affect China’s commitment to support climate negotiations and also the implementation of the Paris Agreement’.

Climate experts from across the world have gathered in Marrakech to decide on the actual detail of the Paris Agreement which was signed last year at COP21. But the details are exactly what dominated the conference. Said to be the COP of action, Marrakech debates and panels were filled with technicalities and trivial thoughts from the delegates with the loudest voices and clear, tangible actions and pledges were few and far between. A year on from the Paris Agreement, just 113 out of 197 countries have ratified, accounting in total for only an estimated 55% of the total global greenhouse gas emissions. The Paris Agreement set the overarching framework for dealing with climate change in the short climate decades to come. But alone it will not solve the problem, and nations now have to pledge responsibility with clear actions and targets to fulfil the 2C temperature goal and to provide the $100bn a year by 2020 agreed in Paris. 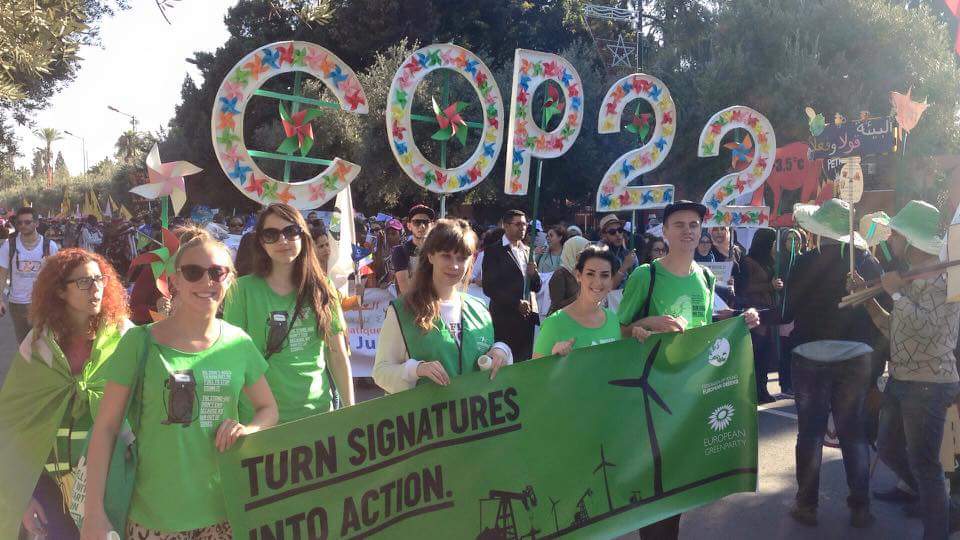 Throughout the COP, there has been a focus on loss and damage to nations in the such as Fiji and the Marshall Islands caused by climate change. With rising sea levels destroying communities in the global south and health of their citizens, cultural and social damage must be at the forefront of the debate. We have witnessed the imperialist US demonstrate the barbaric industrial revolution and debates purely focuses on economic damage of developed nations, however the COP22 and specifically China has shifted the debate to a grassroots level, establishing dialogue with the citizens suffering the most.

Upon arrival to the COP22 Green Zone, we were faced with large, multinational corporations showcasing their sustainable technologies and civil society, yet completely greenwashing over their products and services. Sponsored by mining corporations and ‘green oil’ companies, the COP22 appears on the surface to distract the public into thinking they are taking responsibility for their effect on the global climate change crisis. When in actual fact the COP22 is a brainwashing, bureaucratic event used for climate propaganda on the Moroccan public and the rest of the world. From discussions with local activists, we find hunger striking in Jemaa El-Fnaa square and find that the homeless have been imprisoned for the duration of the conference. Without a commitment to broadcast to the rest of the world the ongoing problems faced by the global south, this COP can hardly be called progress.

The involvement of fossil fuel companies is everywhere: government bodies, ministries for energy, green NGO’s and conferences, feeding their corporate interests into the climate debates. Morocco and many others are moving towards a completely green energy model, however it is also being privatised and greenwashing over the illegal occupation of Western Sahara. This concept of green capitalism is just shifting the problem from one hand to another. These multinationals have the appetite to effect change and explore their role in climate change mitigation but we need to demand their focus on sustainability and for them to reject economic models dependent on growth. 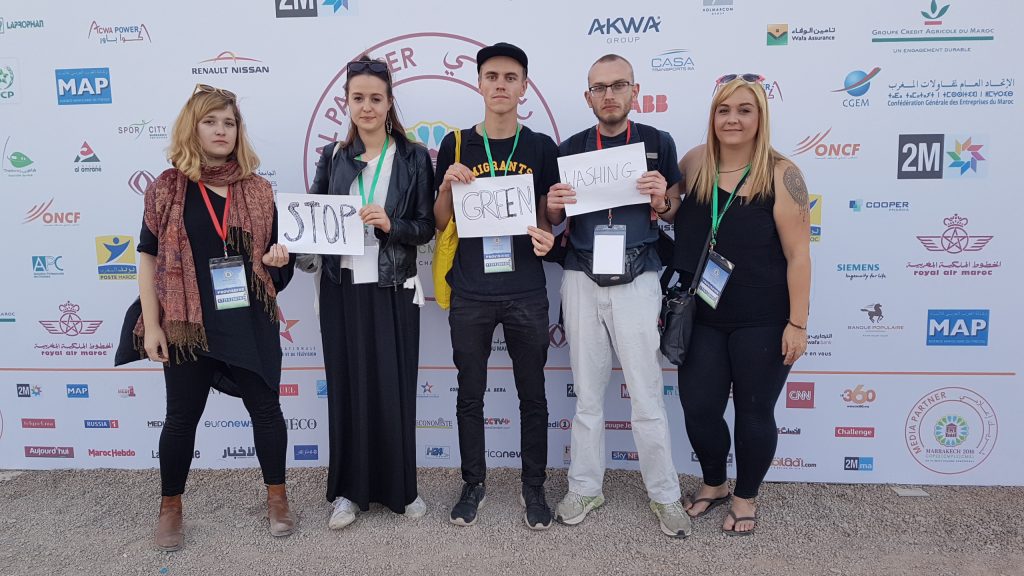 Along with greenwashing, youth participation in the debates was shockingly low. The ‘Young and Future Generations’ day was completely dictated by the Secretariat of COP with no youth consultation and no youth representation on panels or debates during that day. By the COP23, we need to be calling for and putting pressure on a stronger youth focus and responsibility undertaken by the UN to include young people in the ongoing climate change debate, to which we will be the most affected.

Surprisingly lacking in the debates was the aspect of climate and environmental justice and who financially is responsible for the consequences and damage to the global south. This responsibility absolutely cannot lie with developing nations and must be economically and socially committed to by the global north. Social justice and environmental justice go hand in hand but meeting the high financial and emission demands of the Paris Agreement will be difficult without America.

Amongst the propaganda and misinformation, there were several ambitions to come out of the COP22. Firstly to be only at a global warming temperature of 3C by the end of the century. This can be achieved by a global deal recognised by the EU and the rest of the world. The EU’s failure to take clear and decisive leadership in tackling climate change at this COP is embarrassing. By 2023 there will be no more carbon budget. Fossil fuels are expensive, dangerous, unhealthy and environmentally destructive. Secondly, for nations to pledge $100bn a year in Green Climate Fund mitigation finance. In order to make this a reality, we need to put pressure on more parties to ratify the Paris Agreement and play their part in climate aid and climate justice. Climate investment is in the public interest and it makes economic sense to cut all financial ties to the fossil fuel sector and invest in renewable mitigating solutions now.

Trump is only just the beginning. We need to prepare for an era of populism and totalitarianism regimes. We need to put more emphasis on international solidarity and build communities to fight for a sustainable future. The world needs to unite to contain the right wing populism that is gathering force across the globe and emphasise that Trump is internationally isolated in the climate debate. Safeguarding the Paris Agreement is imperative to enter into an ambitious age of shared climate responsibility, to stabilise global climate emissions. What was unthinkable has now become unstoppable, threatening the fundamental foundation of human civilisation. We need to turn ideas in vision, vision into compromise and compromise into policy to protect our global future.

Hannah Graham is a member of the Young Greens of England & Wales. You can follow her on Twitter @hannarrr_