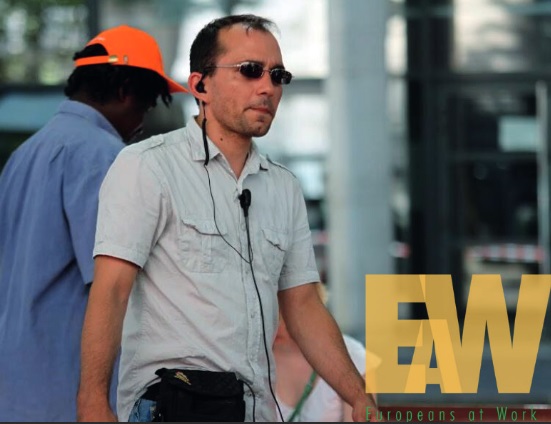 Nicolas is a stage manager for film shootings in Paris. He works for the cinema and television sector.

“I take care of all the logistics of film and TV show shootings. They normally take place in Paris, sometimes in other regions of France. My work consists in asking for authorizations to film out-side (in public places) or to park somewhere, in organising meals, accommodations, transports for the staff, sometimes in negotiating the prices of decors and in trying to find vehicles. For example, if we are shooting a movie that takes place in the 80’s, it is my job to find cars from the 80’s.”

“I have been doing this job for 12 years, since 2007. I didn’t really choose to do stage management at first. I wanted to work on film shootings and it was a good gateway to work quickly. I began to work in short films for free and then the people I worked with on these short films asked me to work with them on TV movies, and then on cinema movies.”

“The working conditions are hard sometimes be-cause we work many hours. The stage manager is often the first to arrive on the set and the last one to leave. We sometimes have to install the dressing rooms and everything has to be ready before the staff and cast arrive. As we are the first ones to arrive, sometimes I wake up at 4 am, and I come home at 11 pm. The extra hours are paid or not ac-cording to the film budget.”

“Before I began to work in the cinema industry, when I arrived in Paris, I was living in squats. I couldn’t afford rent in Paris and it granted me some time. Having to pay rent in Paris would have mean working in a full time restaurant and it would have been too complicated for me to run from set to set to distribute my CV.”

“I benefit from a specific unemployment regime for people who are working in the film sector in France. It allows us to live when we are not shooting. We pay contributions to an organization called the UNEDIC when we are working and this organization gives us an unemployment benefit when we are not working. Therefore, I don’t work the whole year, but rather only between 4 and 6 months depending on the years. There are some years with more shootings, and therefore more work, but sometimes it is not the case. The rest of the time, I am unemployed but it allows me to work on personal projects and to support causes, e.g. the local campaign of the French Green Party (EELV) in the 12th district of Paris.”

“I lost my unemployment benefits once*. It was in 2013. This year was particularly harsh for every-one because there was a lot less shootings. As it was the year of the negotiations to reform our status for unemployment benefits, a lot of directors waited until the end of the negotiations to begin new projects. We were all in a difficult position. Hopefully, I could quickly find a big project of TV show for TF1 – one of the biggest TV channels in France. It allowed me to start over but this year was very difficult. Actually, that’s a problem we have to face each year because it is never sure that we will have our hours done by the end of the year. This is the stressful part. There is some comfort in this situation because it allows us to work on personal projects but this stress is always here.”

“I like the constant change that allows my work. From one set to another, we don’t work with the same people, we don’t do the same things. All the decors are different, therefore all the logistic is different on each set. Every film is a new challenge. We don’t organise things the same way when we shoot an American movie in Paris as when we shoot a little French TV film in the south of France.”

“I could work with the sisters Wachowski during the 15-day shooting of the last Sense 8 episode that took place in Paris. It was nice, but it is not the same logistic at all as a little French TV show. The latter would last 5 days of real shooting and I would have the impression of having worked for 3 months. But, the pleasure of being on set watching the actors of a show you like act has no price.”

Alexia can be found doing yoga and meditation every now
and then and loves the peaceful sound of a river’s water running
or a cat’s meow. She loves hispanic civilizations and has a passion
for the concept of “buen vivir”. She is an ecofeminist environmental
activist who wants to spread caring and love everywhere. She
has been a member of the Ecosprinter Editorial Board since 2018,
as part of a strong belief that every political layer is important to
save our planet. That’s why she is currently working as a campaign
manager for the french green party local elections in the 12th district
of Paris while finishing a Latin-American studies master’s degree.
In her spare time, she sings, reads and runs a lot and likes to
go dancing – always at the sound of latin-american music.