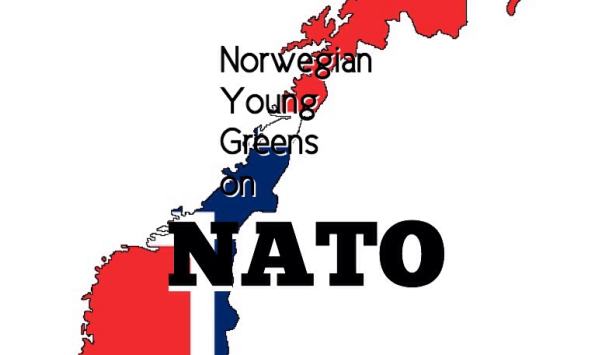 Now we get to one our Young Greens outside of the EU- Norway. More pro-NATO than many of our other Young Greens across Europe, it brings up interesting and relevant questions of green pacifism.

This response was written by Lage Nøst, a spokesperson for the Young Greens of Norway.

The Young Greens of Norway adhere to the same political program as the Norwegian Greens, our parent organisation, meaning our position on NATO is the same as theirs. Roughly, or position is that if we are to support the continued membership of Norway in the alliance, NATO must act as a defensive force, and limit their “out of area”-operations to those for which there is a clear UN mandate. We also demand that NATO actively push for nuclear disarmament globally, and never use their nukes. Nevertheless, we recognise NATO’s defining role with regards to Norway’s capability for national defence.

I think it’s fair to say that Norwegian history, memories of being invaded during WWII and such, contribute to making this a viable perspective for many Norwegian greens. Peace and non-violence are central pillars of green policy and ideology, but this doesn’t have to translate to categorical pacifism in the face of, say, an invasion. Given Norway’s geopolitically strategic location and the possibility of more bilateral conflict resulting from – amongst other things – climate change and resource scarcity, I think Norwegians welcome co-operative efforts for maintaining a decent defensive capacity. In this regard, many greens advocate strengthened collaboration between the nordic countries, and a shift of focus from NATO towards these allies in our vicinity.

Right now, the greens have very little influence on the NATO-debate in Norway. Frankly, there isn’t that much debate. And with limited resources, we prioritize using our sole member of parliament for limiting climate change and securing biodiversity. Our international focus is currently on helping and receiving more fugitives and stopping the export of weaponry to authoritarian regimes.

Up until 2013 the Norwegian Greens took a position against both NATO-membership and to participation in the EU’s military programmes. At the general meeting in 2013, however, the party adopted the current position. This must be attributed, at least partly, to the massive growth of members the organisation saw between 2007 and 2013