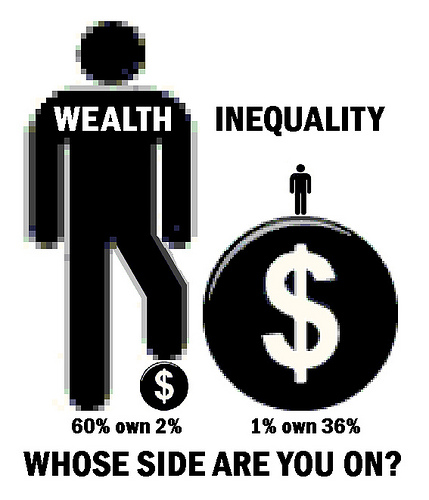 There has been always inequality within human society. The level of equality in any society can reflect its level of democracy, but also the socio-economic model in which the society functions. There is no doubt that under equal conditions a society thrives more and is more diverse. The recent financial crisis has contributed to an increase in inequality in the European Union (EU). Adequate financial reform is therefore necessary, but what should such reform look like?Before we talk about ‘inequality’ in any specific form, it is essential to truly understand the concept. The fact that there are unequal conditions in every system or society shows that there are asymmetric relations among people themselves. Psychologically, we distinguish ourselves from the others within a society. As humans are social-beings, they tend to organize themselves into social groups. Despite being of equal worth as human-beings, the inner comfort of belonging to some social group may cause discriminatory thinking, and consequently inequality. Equality is anchored in democratic values, but it might take time before it is anchored in the collective consciousness too. Targeted policies may contribute to the understanding of its value, and could transform the on-going competition between individuals and social levels into cooperation.

Statistically, we can divide society into income levels. Within the EU, the income distribution between the richest countries (such as Luxembourg) and the poorest countries (such as Romania) is very uneven. Specifically, we can say that the regions with lowest income belong to the post-communist countries. This wide inequality is observed not just between EU Member States, but even more (70%) within the states. Hence, the EU aims to eliminate regional discrepancies and secure balanced development. However, there has not been a lot of progress in eliminating regional inequality; the structural and cohesion funds are often misused, and resources are used inadequately. Transparency and utilization of funds should therefore be revised.

Inequalities in the financial system do not represent simply an uneven income distribution, but also unequal access to financial resources and services. Despite the fact that financial services are being further liberalized, everyone does not have equal access to them. Small entrepreneurs face many technological and institutional difficulties. The need for various kinds of patents, licences, fees and taxes means they are often unable to start creative and productive activities. Reform is needed if the financial environment of the EU is to recover, and the reformed financial system should ease access to such services and should be transparent. Society should be well informed and well educated about the functions, features and possibilities of the system. Without this, financial reform may even worsen inequality.

Claessens and Perotti, in their analysis of financial reform and inequality, say that “concentrated economic and political powers will likely block financial (and other) reforms, or manipulate their design and/or implementation, so that the benefits reach fewer individuals. “This analysis explains that unless there is a wider and more open approach to reform design, the advantages of the reform could be only for insiders. Political and lobbying interests could negatively influence the form that reform takes.

Design of the reforms requires the involvement of each level of society and cannot be a strictly political or institutional decision. We need transparency throughout the process, creation of an independent regulatory and supervisory institutional system, resistance to lobbyism and corruption and independent judiciary power. To avoid political or corporate misuse of the new system we need access to proper education, information and public debate about the system should be open and accessible. Also, as the analysis supports, it is necessary to involve non-state institutions and social groups in the process; such as grassroots organizations and NGOs.

The banking system should serve the people and provide efficient services for a wide spectrum of individuals. The centralization of monetary policy does not bring equal opportunities for all regions, and alternative monetary systems are crucial. We cannot continue with the capitalist pattern in which the banks profit from the debt of both nations and citizens, and provide a false value of goods and services, leading to the depletion of resources and unequal distribution of wealth. To avoid the impact of more financial turmoil, we need to transform the financial structure. A decentralized and participatory financial system could serve as a protection against globalized economic downturn and could create real growth accompanied by the transition to low-carbon economies.

To fight inequality in the financial system, we need to target inequality in all its complexity. In order to provide equal opportunities for the whole population we need to provide a form of basic income. Only then will we be able to talk about equality within and between member states. The concept of basic income reflects democratic values and represents freedom and non-discrimination. Moreover, it would lead to a reduction in poverty by improving access to goods and services like food, accommodation, health care and education.

To sum up, inequality is a crucial problem in our society, as well as in the world, and requires complex policies. Elimination of inequality can be achieved by restructuring the financial and economic system. Recent crises have caused greater inequality within the EU and to avoid more turmoil it is necessary to reform the system. Such reform includes creation of transparent, participatory reform, gradual implementation and independent supervision and regulation. Provision of basic income would be a good starting point for eliminating social inequality and poverty.