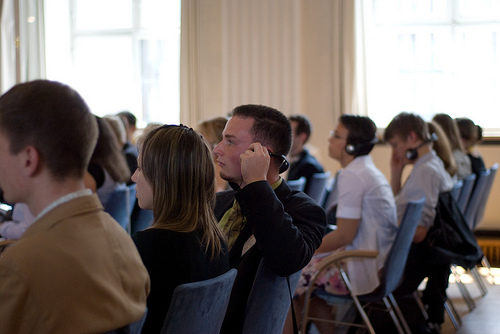 Facing a dramatically high youth unemployment rate and above average migration figures within the younger generation, the city council in the small town Pforzheim had a great idea. It was 2009 as it began to rumble in the city located in South-Eastern Germany. The activist group “Unabhängige Bürger” was very concerned with the identification and participatory possibilities of young people in their town so they vigorously brought up the idea that could solve all their problems: “We need a Youth Parliament!”.

The municipality sucked in the idea like broth would suck in water. Without further discussions, they commissioned a part of the City Council with the job to enact such a Youth Parliament. It was thought that the Youth Parliament could be founded in a short time. However, the working group in charge of the foundation was not very creative and hid behind a wall of excuses. Some said: “We never did this before!” Others wailed: “We need more time!” Each impatient query with regard to initiation of the Youth Parliament was countered by silent ignorance.

When after three years nothing had changed, some brilliant people finally came up with the only right solution you could think of. If you want to found a Youth Parliament for a greater participation and involvement of young people in the business of the town why not try to ask them. As soon as the idea was spoken out a hasty campaign was run by the city and in January 2012, after some e-mails were sent to the representatives of the Youth Parties in Pforzheim and selected schools, a first group of 64 met.

This meeting led to a whole bunch of productive and smart ideas how could a possible representative structure for young people look like. The town itself saw this as a confirmation of their good work and let some of the youngsters present their work in front of the city council. The municipality was in good mood as after years of standstill a working basis existed on which a Youth Parliament could be built upon. But the disillusionment arrived soon; bureaucratic hurdles regarding the first steps were too high and the work of the Law Department was too slow (its first information appeared half a year after the presentation!). So finally in June 2012 the polished draft was presented. The loss of their interest was caused mainly by lack of transparency behind the scenes and by insufficient number of meetings. Only about 30 people came to the results presentation of the city council´s work. And what was presented there made the audience speechless. The shocked youth heard about some sudden changes they had never admitted to. On the one hand, the mayor was sitting as head of the Youth Council in front of them and had even a veto for every decision they made. On the other hand, the before promised budget was reduced to some bread crumbs; so it seemed.

Although dissatisfied, the involved youngsters organized themselves and looked for a way to connect with the municipality to point out that Youth Council means something else then the presented draft. Despite the first signals of willingness from the city of Pforzheim, they kept mainly to their version during the tough negotiations that followed. There were appearing still less and less of the originally 30 young people on the meetings during the long-winded months of negotiations. By the time, the city tried its best to show off in front of the press, rhapsodising successful youth participation process while, in reality, not moving an inch in their plans. However, the climax of this sad process was when there were just three representatives of the Youth Organizations of the bigger German parties present.

Some weeks after a multiple polished and still not satisfying statute was passed through the city council.

In light of the great ambitions during the start of the process of forming the Youth Parliament in 2009, this result is more than questionable concerning the success of the whole project. If you want you can learn out of the negative example of Pforzheim the following:

The young generation wants to participate more than anyone else. They wish for a Youth Parliament. This is reflected by their enthusiasm (most of all) during the beginning and the perseverance of some of them during the process.

But they also want the possibility to be themselves the ones who plan for and create the Youth Parliament. They don’t want to be “allowed to have” their Youth Parliament from above or for an image of a town. Just the motivation to really let young people participate should be the reason to think about a Youth Parliament.

This is something Pforzheim might not have understood. It is still on unwritten pages if other towns are going to have more luck in youth involvement in the formation of a Youth Parliament. For a lot of reasons, like democracy, participation and the future generation, we can hope it become possible.