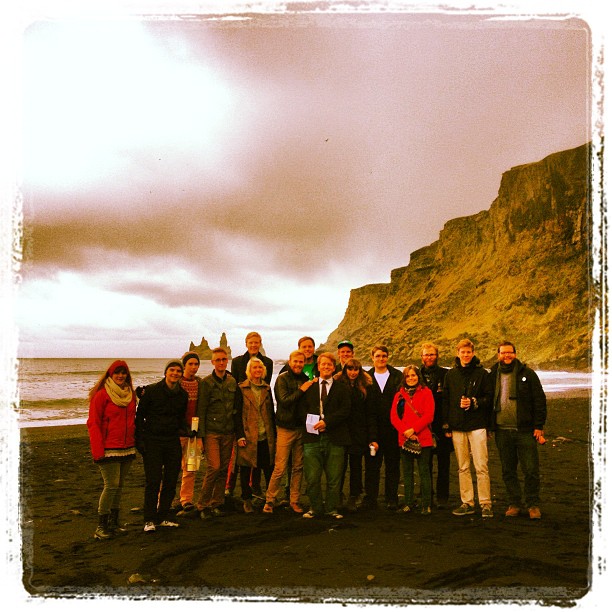 It seems that Iceland became the new trendy destination for the Federation of Young European Greens’ Executive Committee Members.

As we were just getting back on tracks after Phil’s recent visit to the Young Greens of Iceland – pronnounce Uvg Ung Vinstri Graen (UVG); we just learned Silvio, the budget coordinator of FYEG, was going around on the Icelandic TV with signs saying : “UMHVERFISRADHERRAOSKAST”.

But let’s come back to what interest us here (although we hope to have some crispy news about Silvio’s trip soon), which is the visit of FYEG Executive Committee member Philippe Schockweiler to the Left Green Youth of Iceland. 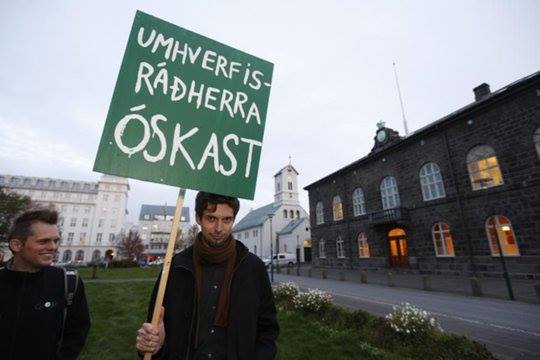 Silvio cheering up the Icelandic News

A couple of weeks ago, the international secretary of UVG ( Youth of the Left­Greens /Ung vinstri græn) invited me to attend their annual General Assembly. Upon arrival in Iceland last Wednesday, we first took a small tour of the Parliament, which strangely reminded me of my own parliament in so many ways, number of deputies, size and the political discourse (*cough*).

After that we met with the local host organisation and took preparations for the G.A. Going over the documents and political resolutions was very intriguing and ravishing for me.The G.A took place in the Southern town of Vik­i­Myrdal, 180 clicks away from the capital Reykjavik. The small town is almost as a theatre, surrounded by volcanic mountain slopes and the roaring Atlantic ocean that throws itself against black volcanic beaches.

All in all, the perfect setting for a wonderful General Assembly. Politically speaking, the GA focused around a manifesto update, the executive board elections, a better environmental protection policy for Iceland. The main resolutions were about feminism, human rights, LGBT+ and NATO & foreign policy. On feminism, unlike what other “Nordic” examples of “post gender” would suggest, “UVG” are very “hands on”. The fight for women’s rights is far from being won and they have passionate campaigns on this topic. Also on LGBT+ rights UVG takes strong standpoints and is perceived on these topics as a driving force within the political sphere of Iceland.

Another thing which from my “westernised” political glasses is very refreshing is the truly non­violent values that they are implementing, also when it comes to foreign policy. Iceland has no military except for a Coast Guard, and is known to have a police force that does not carry guns. This is truly an amazing way forward which also UVG thinks is worth implementing not only locally but globally. Their NATO resolution from their congress also has this signature: A refreshingly critical and honest approach towards NATO as being not a peace stabiliser but rather an element that fosters conflicts and inequality in the world.

This critical thoughts led to the fact that many Icelandic politicians have managed to set the benchmark very high when it comes to criticise or point out problems in international relations, based on solidarity, and a very voluntaristic development aid policy. On planning actions, UVG has a strong focus on environmental protection topics: Currently, they are looking into the Norwegian­ Icelandic joint venture to seek for oil in the North­Eastern sea, in an untouched and highly fragile eco­system, famous to be a huge wildlife and fish reservoir.

In addition to that, UVG seeks protect the so called framework plan for Icelandic nature, that protect the environment from high­impact projects like dams, powerplants but also unsustainable tourism and building. Furthermore the topic of innercity quality of life and sustainability was mentionned, how to “green” a city to make it more eco­friendly.

To Phil’s despair, no bikini-look on Icelandic beaches

I was really happy to be received and welcomed in such a warm way, and have become true “gamli vinur” (Icelandic for “old sport/friend”) with UVG. The fact that I used to front an organisation, the Luxembourg Young Greens, which are similar in size and shape made the experience even more pleasant and then, there is of course Iceland itself: With it’s astonishing blunt and brutal beauty, a contrasting nature, between sky, sea, ice and fire.

Loosing (a piece of) my heart was definitely easier than I thought, but making the way back a little sad. On a personal note: After 2 years of non­flying “train­Philly”, I took for the first time again a combo­breaking plane again.