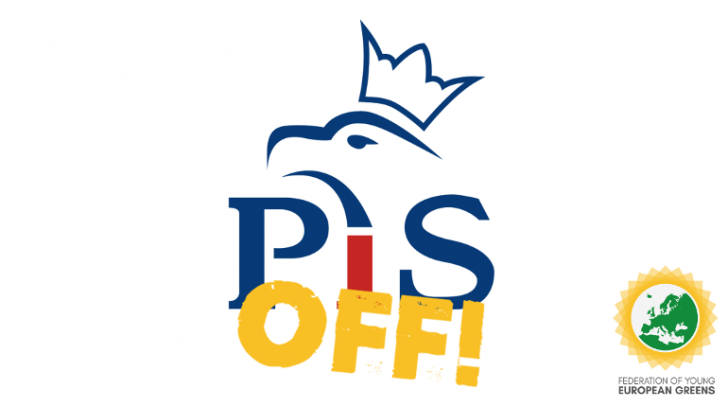 I have been confronted with bad news from Poland almost every day. German media talk about the new government in connection with protests, taking control of public media, introducing an authoritarian Budapest Model, breaking other EU democracy rules and so on… That is why I’m asking myself: What’s going on in my beloved neighbouring country? Should I be worried?

In June 2015, when I met Aleksandra Kołeczek the last time in Poland, things were completely different. My Erasmus semester was about to end, I had learned a lot about the past and the present. After the presidential election there was a turnaround on the horizon for the country, it became clear that change was in the air. Anyway, I thought things would slowly, but continuously get better. I couldn’t really imagine that the political situation would become worse in such a short time. I’m still optimistic that the Polish will find their way towards a stable democracy within the European Union, based on human rights. But let’s ask Aleksandra about her opinion, she should know better. She is a co-spokesperson of the Green Youth in Poland. Aleksandra works and lives in the capital Warsaw.

Sonja Fasbender: Dzień dobry. Why did so many people vote for PiS?
Aleksandra Kołeczek: The conservatives from PiS (Law and Justice) won because of the resentment and lack of mobilisation of the society. Many years of domination of the center, neo-liberal party PO (Civic Platform), had made a lot of people disappointed. Their lives were very much different from the vision the ruling government promoted – economic growth did not cause a greater social justice. Nonetheless, it seemed that politicians that were supposed to represent the nation did not seem concerned enough with this. The credibility of the political class was constantly disqualified because of the bribery and impunity. Over 50% of the citizens in Poland who could take part in the parliamental elections did not exercise their right. Right wing conservatives, populists and liberals benefitted. Moreover, PiS has an alluring programme which creates an illusion that social rights can be granted regardless to the rights of minorities and international solidarity. The people who wanted to please their nationalist interests finally found their answer.

Sonja Fasbender: To what extent is the political culture changing right now in Poland?

Aleksandra Kołeczek: The political culture of the ruling party in Poland continues the tendencies of the predecessor and further radicalises irresponsible behaviour. It undermined the very basis of the political system, which is the Constitutional Tribunal. By enforcing the control over the tribunal, PiS eliminates the crucial control of the upcoming law proposal when it comes to their compliance with the Polish Constitution. Without that control any other idea of the ruling party can be quickly implemented thanks to the majority in the parliament, supportive president, monolithic government, politicised civil service and public media. They are ready to implement changes proposed by PiS with paralysing speed (for example overnight), without public debate.

That change also leads to building a broad opposition outside of parliament. The way of making changes described above makes a lot of people angry. A civil movement called KOD (Committee of the Defense of Democracy) was formed. It is a broad movement, which unites people from many political and non-political organisations, who have one thing in common – they don’t agree to the weakening of the democracy in Poland. The demos organised by KOD happen regularly all over Poland and abroad (among others in Brussels, Berlin and London). Thousands of people attend. The awakening of that group and the face that those people can unite to defend common values, is also a big change in political culture in Poland.

Sonja Fasbender: How dangerous is it to work against the new government?

Aleksandra Kołeczek: So far there are no repressions against the opposition in Poland. We have the right to demonstrate and, in theory, the right to state opposing opinions is granted. However, the changes that the ruling party is making, makes the opposition anxious. By introducing new law PiS gained control over public media. The management and staff of public radio and TV stations was replaced by those who are in favour of the new government. In that way, access to information and to presence in the media was strongly limited for those who could be critical. Moreover, there is a new law coming, which will allow greater invigilation of the citizens under the pretext of increasing safety. If the new police bill is introduced, the court order won’t be necessary to read emails, check location and use other type of metadata considering individuals. This kind of power can be easily overused to silence the opposition.

Sonja Fasbender: How strong is the Polish civic society?

Aleksandra Kołeczek: Thanks to the KOD movement and increasing anger caused by the lack of democratic standards the civil society is more mobilised and is getting stronger. However, there is also a part of society (the half of those who were entitled to vote, but they didn’t), who is so fed up with low political culture, lack of representation that they don’t want to take part in the democracy at all. The developments of upcoming years are crucial. It will prove whether civil society can make a change. The KOD movement is still strong, but each time less people come to the demos. They will also observe the European Union reactions, hoping for the European community to make influence in order to ensure democratic standards in Europe.

Sonja Fasbender: How does the majority of the people currently think about the European Union?

Aleksandra Kołeczek: The majority of the people in Poland are in favour of the membership of Poland in the European Union (84% according to the recent data). The huge support of the people is certainly caused by the financial help that Poland is receiving from the EU. There is still very little awareness of the possibilities and obligations that come with the membership. That is why the participation in the latest elections to the European Parliament was so low (only 22,7% of those eligible to vote). Paradoxically, due to the recent political situation the awareness can increase, because the recent debate about the political situation in Poland was transmitted by the TV and widely discussed in the media. The most important for the opposition will be the result of the rule of law procedure started by the European Commission. Hopes are high.

Sonja Fasbender is a member of the Green Youth in Germany. She is a master student of political science.

The text was originally published on Sonja’s blog: