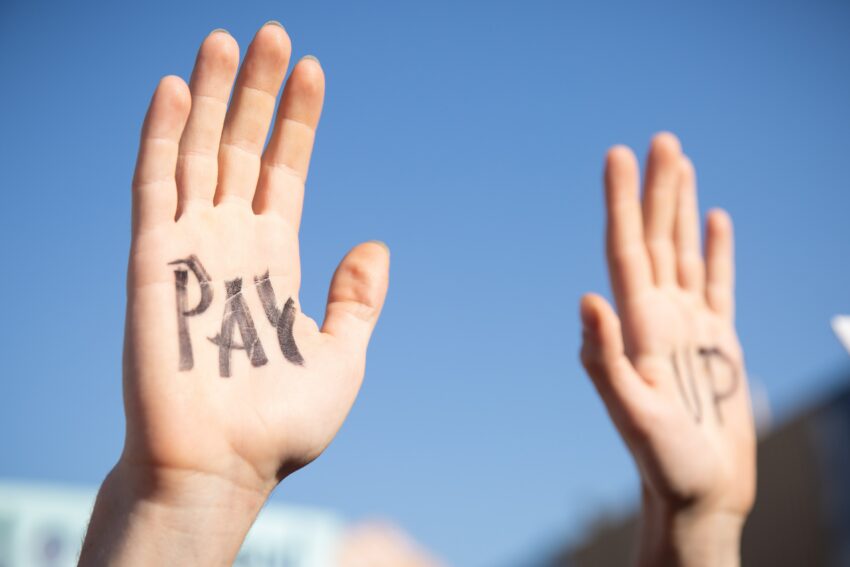 This article was written by Irene Vivas Lalinde with additions and edits by Stefanie Berendsen and Klāvs Veseļuns.

I wake up in a foreign city that somehow feels familiar. I recognise the light of the Mediterranean periphery and the flowers on the terrace. In Cairo, new streets appear daily to accommodate the 21 million inhabitants. I will shortly attend a global conference organised by a criminal government five hundred kilometres away, but people I am crossing on the street do not even know about it.

My fear has been fluctuating. It rose at its highest after one of our preparatory delegation meetings, where we discussed the risks we take as foreign activists in a country that murders its own. While people from around the world attend COP27, the conference host keeps over sixty thousand people in prison for exercising rights we take for granted. Yet, my perception of the threat has diminished in the past weeks, especially after an Amnesty International event where former political prisoners reminded us of the privilege of having a European passport. For me, a manageable risk. For Egypt’s activists, the threat is real. Still, this is a formative experience—a hostile COP.

FYEG has paid for the travel of a delegation of eight people. Giacomo, Clara, Isaura, Ali, Stefanie, Klāvs, Sean, and myself, Irene. I’m glad I got to experience Cairo before arriving here. So far, Sharm El Sheikh is an ugly and uninspiring place: a fake Disneyland, a for-profit playground constructed for alien tourists far from the soulful capital made and remade by and for its people. We are locked up in a golden cage, so that the President can keep us separated from Egyptians. It gets dark early, but the sunset is the most beautiful thing I’ve seen so far.

As I wait for Clara at the airport, the hostility of the place begins to permeate. Guards register me again upon my arrival at the airport. A mix of tourists and delegates flow in, but I can clearly distinguish one from the other. Volunteers struggle. They keep asking families with beach toys floating out of their luggage and elderly Russian couples: Are you coming to COP27? The volunteers smile gracefully throughout their fourteen-hour unpaid shifts; their friendly faces are meant to mask the blood-stained hands of the host.

We wake up early on the first day and take the bus to the venue, crossing the desert between luxury resorts. The food is terrible and the prices outrageous. Water points are scarce. We are aware of other activists who face last-minute cancellations or price increases of 300% for their accommodation.

COP is also one of those places where you run into world leaders while waiting to buy a coffee. On the second day, I confront Nicolas Maduro about fossil fuel extraction in Venezuela and his agenda at the event. My voice sounds firm but does not reflect how my stomach feels. Fear and power. Such intertwined human emotions. By committing small acts of rebellion, we cure our feeling of helplessness. We empower ourselves.

On the third day, the security guards confiscate materials for a protest Sean is carrying. ‘When I saw the guard looking at it, I felt scared,’ he tells me later. ‘Coldly, I took my things and walked away. They stopped me and asked to see my accreditation. I trained for this. I responded in the best possible way. At the same time, I was shaky. I called the United Nations security guards to witness the whole situation. Local guards searched my bag without permission and took a picture of my passport. I felt like I failed.’

Days feel incredibly long at this conference. We celebrate each other’s small gains: a new protest, supporting other activists, getting cheap food. Before getting to Sharm, we discussed some of the ethical issues around us attending, like flying here. But still, we know our privilege; many activists have not made it to COP27.

Hours pass without seeing each other, chatting through Signal and meeting for dinner. We engage on social media, stage protests and actions inside the COP27 venue, talk to politicians, negotiators and other people in powerful positions. Many meet with us voluntarily, but for some, we need to be more creative – we become experts in approaching people in the hallway, in line to the bathroom, in the shuttle bus. Civil society organisations have secured a safe place to do some activities, from making banners to unwinding. At the end of a week of frustration, we want to disconnect. The music here is out of fashion, but the energy is high.

On the final day Stefanie, Klāvs, Sean, Ali, and Isaura organise actions to show that civil society is still watching and demanding a good deal (which we didn’t get, but it could have been worse). The closing ceremony starts at 3 AM. A joke, we first think. It feels like half of the plenary is asleep, but we are not closing our eyes.

Six hours later, Stefanie and Ali read the closing statement of the closing plenary of COP27 on behalf of the Children and Youth Constituency (YOUNGO). It was an honour for them to deliver the final speech collaboratively, prepared by young activists worldwide. Other activists form a circle behind Ali and Stefanie as they speak. Hands on their shoulders. Unity. An opportunity to directly and publicly address global leaders, speak truth to power, shame them for being asleep or having left early to block out their children’s voices. Make clear that we, their future, will not stand for this outcome. We witnessed this farce, and we will not forget it. We promise that we will hold them to account. We know that we deserve better. We stand together. We need more, and we demand more. But they’re not listening.

We only got a glimpse of what it is like to live in a country where fundamental human rights are under threat, a great reminder that we must defend our civil rights and the rule of law every day of the week. Today, we are all back home safe while the Egyptian government has detained seven hundred people between October 1 and November 14. The whereabouts of forty of those detainees remain unknown.

I ask Sean what keeps him hopeful, even if the 1.5°C goal is dying. ‘Through periods of despair,’ he says, ‘moments of significant change sprout. We, as activists, must check if we are doing the right thing and value our actions.’