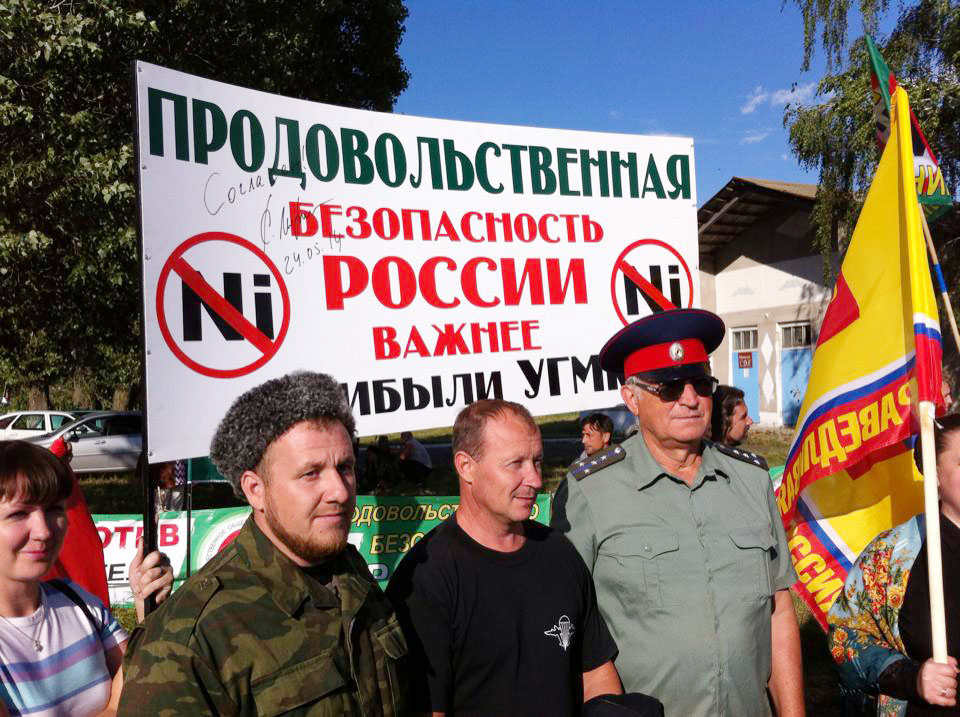 Protest against nickel mining in the Khoper region in Russia goes ahead against a backdrop of trumped-up criminal charges and a high-level corruption scandal.

On June 22nd, a large demonstration took place in Voronezh region, against copper-nickel mining, calling for a complete ban of coloured metal extraction in the Central Black Earth Region. About 1000 people took part in the demonstration, from various regions at risk from the damaging effects of this mining. This protest against copper-nickel mining is one of the biggest, strongest and most longstanding in the history of eco-protests in contemporary Russia; it has continued for more than 2 years and involves tens of thousands people. 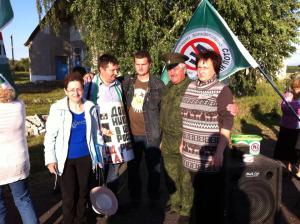 This demonstration on the 22nd of June was held to mark the first anniversary of last year protest, when around 4000 participants gathered to form a peaceful demonstration near geologists’ camps, destroying illegal fencing and drilling equipment.

This year protestors gathered at the geologists’ base once more, where, cordoned off with troops of riot police, they chanted the slogan «Stop nickel mining at Khoper river». They demanded representatives of the bid-winning firm Ural Mining and Metallurgical Company (UMMC) cease geological works and presented their manifesto. In this manifesto local people and their supporters demand the Government of the Russian Federation to cancel a decision to develop copper-nickel mining in Voronezh region and to revoke the license awarded to the LLC Mednogorsky Copper and Sulfur Plant UMMC. 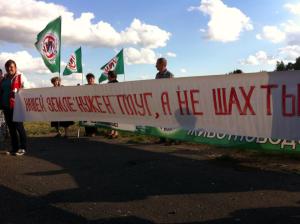 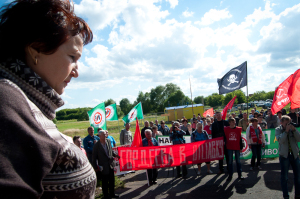 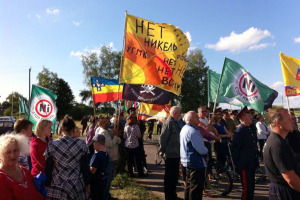 One of the demands to federal and regional authorities is to stop illegal persecutions and punitive measures against eco-activists and local people struggling against copper-nickel mining. Demonstrators called for ‘a strong and responsible state power that doesn’t fear to acknowledge its mistakes before people’. The protests continue against a backdrop of trumped-up criminal charges, launched against several local residents.

On June 9, the Russian internet-newspaper Znak.com published a letter from Mikhail Besmensky, a resident of the Voronezh region who was arrested on 26th November 2013. The arrest was a result of an operation involving the management of the UMMC and the Russian Ministry of Internal Affairs’ Anti-Corruption Department. As well as Bezmensky, authorities also arrested Igor Zhitenev, former chieftain of the Autonomous Kossacks of Novokhopersk. The operation also resulted in the questioning and searching of the homes of a number of environmental activists, as well as scientists of Moscow State University and The Russian Academy of Sciences. In his letter, Bezmensky reveals details of cooperation between the heads of the Anti-Corruption Department and the UMMC. The case against the environmentalists was put into motion after a statement from Deputy General Director of UMMC Pyotr Yamova to the head of the Anti-Corruption Department General Denis Sugrobov. After this, Sugrobov’s deputy, Major-General Boris Kolesnikov, wrote indictments which contained false accusations against leaders of environmental groups and activists. Oleg Silchenko, a figure mentioned on the Magnitsky List, was appointed head of the investigative team. Later, in February 2014, Sugrobov and Kolesnikov were themselves arrested for provocation of bribes – an act rather like the sting operation which they themselves organized against Bezmensky and Zhitenev. On June 16, Boris Kolesnikov jumped from a window of the Moscow headquarters of the Investigative Committee of Russia where he was being questioned, and died.

The purpose of the case against the inhabitants of the Voronezh region is to suppress and discredit the popular environmental movement against planned mining of nickel in the Central Black Earth region of Russia by UMMC. The conflict between local residents and environmentalists, and UMMC in Central Russia has been raging for over two years. Throughout this period, the local population has protested strongly against the decision to mine nickel in the agricultural Black Earth region, in close proximity to the world-famous Khopersky reserve, and the Khoper river, one of the cleanest in Europe. The protests for the cancelling of the plans are supported by credible, independent scientists. Their assessments of possible economic, social and environmental impacts prove that the project could threaten global food security, negatively affect the ecological situation in Central Russia, damage agriculture and the health of the local population, and is unreasonable from the point of view of ecological economics, in addition to the fact that it is fuelling serious social conflict. .At the beginning of his letter, Mikhail Bezmensky admits that he tried to help UMMC to suppress opponents of the construction of nickel mines and a processing complex on the Khoper. But the top managers of the company, having instructed Bezmensky to pass money to other leading activists, then orchestrated the arrests.

Later in the letter, Bezmensky describes how he was taken to Moscow after his arrest, where investigators, together with the leadership of UMMC, attempted a similar sting operation to arrest the coordinator of the «In Defense of the Khoper» movement Konstantin Rubakhin, by giving him specially marked banknotes. However, this operation failed. Rubakhin fled Moscow, and is still in hiding because of the threat to his freedom. In his letter, Bezmensky emphasizes that Sugrobov is in constant contact with UMMC, and has met with the company’s management in person. This is confirmed by the fact that Sugrobov’s wife, Yana Tikhonova, heads the Moscow office of the Swiss company Glencore, a regular trading partner of UMMC. Glencore is also UMMC’s most likely partner in the trading of the metals which are scheduled to be mined in the Khoper. Under the pressure of physical and psychological torture (beatings, and threats to the safety and health of his wife, also being held by police), Bezmensky was forced to give false information against activists on camera, and was also pressured by a lawyer to sign a document with false information imposed on him by UMMC representatives. The videos of Bezmensky’s testimony, and secret recordings of his and Zhitenev’s arrests, were widely spread by mass media to  falsely inform viewers that the real aim of the social conflict on the Khoper was to blackmail UMMC.

In his letter, Bezmensky especially emphasizes the relationship between investigators of the Khoper case and UMMC. According to Bezmensky, the Deputy General Director of UMMC Pyotr Yamov gave instructions to police, and personally threatened him with a long prison sentence. Bezmensky’s letter ends with a call for law enforcement agencies to investigate the situation. Thanks to the facts stated in the letter, indictments have been submitted to the Russian Investigative Committee, and the Russian Federal Security Service (FSB).