During the CDNEE (Cooperation and Development Network Eastern Europe) seminar in Tbilisi, Georgia, which took place from 27th-30th of November 2014, many young people had a chance to say what Europe meant for them. Unlike in many such discussions, Europe was far more than just European Union. 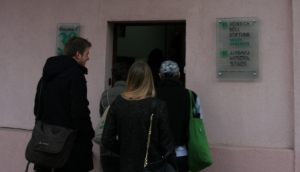 Most of the participants came from the countries outside of European Union such as Ukraine, Belarus, Moldova, Georgia, Armenia or Serbia. Nonetheless they are a part of Europe in a geographical, as well as cultural meaning. So why do they have to talk about ‘reaching out (to) Europe’? An elephant in the room is a country which opposes to European Union, a country that doesn’t respect human rights, democracy and independence of its neighbours. Russia is an obvious guess. In Eastern Europe the fear of conflict with Russia is much more real than in the western part of the continent. Especially, that it is clear that all you need to start it is to decide to come closer to the European Union.

The seminar was devoted to the Eastern European Partnership Programme, which is an instrument offered by the European Union to the candidate countries, which were mostly under the influence of Soviet Union. It seemed that the choice is available. Counties such as Poland, Hungary and Czech Republic joined EU in 2005, which certainly weakened Russian influence in this part of Europe. The problem intensified when the countries closer to Russia, such as Georgia and Ukraine decided to turn towards EU. Both of them paid very high price: Georgia was attacked and lost Northern Ossetia, for Ukraine the ongoing war has already brought very severe consequences and might still bring more.

One question which kept on coming back during the seminar was: ‘what can we do about it?’ As greens we are against violence, peaceful methods are all we have. It is extremely difficult to cooperate with a society influenced by propaganda and fear, but it seems the most promising way to go. The democratic opposition in Russia and in the neighbouring countries rises against all odds. We can support it, using the framework of CDNEE for example. One of the goals of CDNEE is to have a member organisation from Russia. So far no one wants to take the risk, which doesn’t mean that one of these days someone will.

Check out the photo gallery.