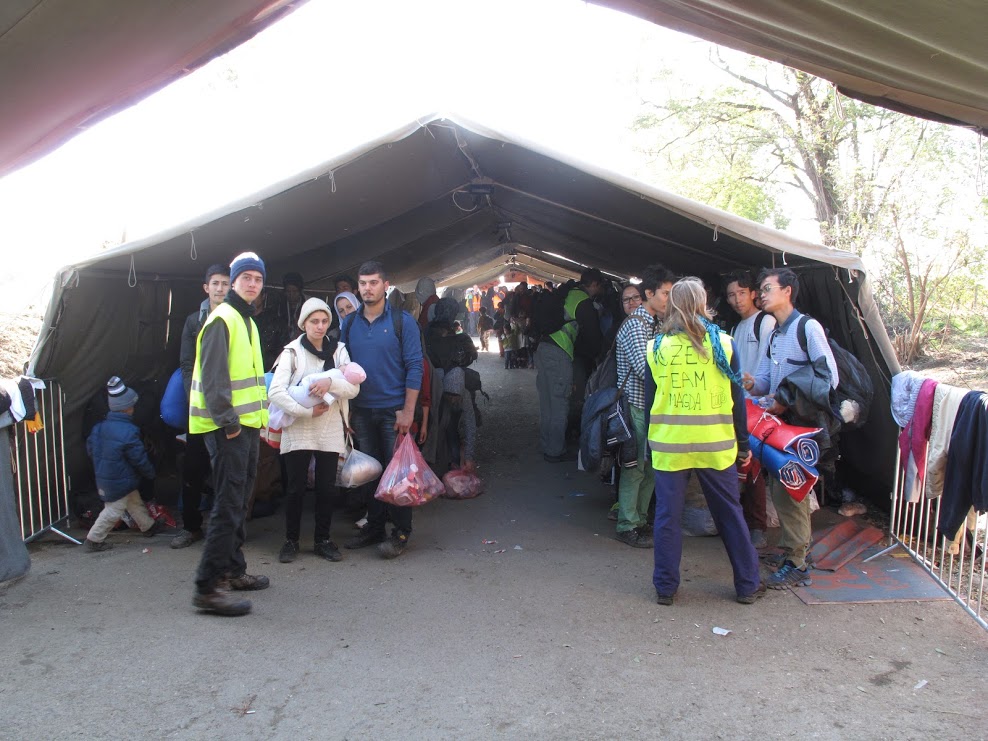 I have spent 3 days on Serbian-Croatian border in Berkasovo (SR) as a volunteer involved in the grass root, self-organized and self-named “Czech Team”. During that time there were more than 100 volunteers working and an absolute majority were from the Czech Rep. The main task of the team was to provide basic humanitarian aid to refugees (clothes, food, hygiene supplies and medical care[1]) and to organize refugees in to groups of 50 people to fit to a bus on the other side of the border, so called “crowd management.” Buses from the Croatian side take all refugees to a camp in Opatovac, where they are registered and then they can continue to other EU countries, mostly to Germany. According to the Czech Team, the estimation of passing refugees through Berkasovo is around 4.000 refugees per day.

I have had a chance to shortly talk with tens of refugees personally. Mostly to men with and without families, the majority of them from Syria and Afghanistan. Other nationalities were from Iraq, Iran and a few from African countries like Eritrea. The situation on the border was not ideal for decent interviews; all refugees were in hurry or/and had to move step by step from the Serbian border to Croatia, some of them were together with big families or group of friends and could not leave them even for a short moment or could not spend more time with me due to other reasons. Unfortunately, a lot of them could not speak in any common language. Moreover, all volunteers including myself were really busy because of the amount of people who were coming to the border and because most of them were in different types of actual need. Due to this fact, my findings are much more general than detailed; also consist of stories which were shared by other volunteers. However, this report can be divided to two main parts: (1) findings directly linked to the refugees’ situation and (2) findings directly linked to a Serbian cooperation with the Czech Team (civic society in general) in Berkasovo. Nevertheless, some findings are a mixture of both.

– All refugees I was talking with came by bus from Preševo (Прешево).

– Buses from Preševo are organized by the Serbian government.

– The cost is around 40€, but the price has been reduced recently. Before it was more than 70€.

– According to the Czech Team, the bus company is owned by a relative of the Serbian Prime Minister.

– According to a few refugees’ testimonies, sometimes Serbian Police stop buses on the way and wants a bribe which has to be collected and paid by refugees.

– Buses go via Belgrade where probably all refugees have to transfer. Usually they have to wait for several hours without any assistance in the city. During that time, when refugees are waiting, refugees are vulnerable towards other police harassment (bribes, violence, thefts …).

– Due to that fact, some of them rather take a taxi which costs from Belgrade to Berkasovo around 100€.

– The Serbian government does not provide any humanitarian aid to these refugees.

– Most of all refugees, do not have proper information about their situation including where they are going, what rights they have in Serbia, what is obligatory for them and what is not.

– In Preševo they are registered and fill documents which look like an asylum request. The problem is, that everybody doesn’t have these documents >> refugees who don’t have it are stressed by the situation, e.g. they would not be able to leave Serbia legally. There are many who do not have these documents.

– There is a suspicion that all or a majority of refugees do formal/legal acts without an interpreter.

– One volunteer shared a story with me which about the situation on the border with Bulgaria (Although I have not personally met anybody who crossed the border from Bulgaria). She met 3 men from Afghanistan who have been in detention for 35 days under very bad conditions (lack of food and drinks, police violence incl. beatings). Moreover, they were taken from their families.

– According to other volunteers, the situation in Dimitrovgrad (Димитровград) is much worse than in Preševo. Especially on the Bulgarian side, including their Police behaves very aggressively, even brutally, towards refugees.

– According to other volunteers, the situation in Harmanli camp (Bulgaria) is frightening. The camp is overcrowded (more than 2.500 instead of its capacity, which is around 1.600 persons). International standards are far from being fulfilled. Namely, there is lack of medical care including medicaments (refugees must pay even for basics), there is no governmental support for education in the camp >> the Kurdish minority has established an autonomy there to fulfill fundamental rights for their children and other vulnerable groups. However, they are in persistent conflict with Bulgarian authorities. Police attack refugees in the camp regularly.

– Serbian authorities use a very negative approach towards the refugee crisis.

– Serbian authorities do not provide any humanitarian aid. They just provide paid buses and trains occasionally.

– Serbian authorities do not understand the purpose of civic society >> they do not understand the motivation of all volunteers in case of overall humanitarian aid. They are very suspicious towards the Czech Team and are not constructive at all. Serbian authorities obstruct and even take to time harass volunteers on the border rather than cooperate. They are not making better conditions for the people who came to help on their own costs and in the end, are doing a job which should be done by Serbia as a state.

– According to the Czech Team, three weeks ago Serbian authorities banned all Czech Team’ activities without any relevant reason. They allowed to the Czech Team to work on the border after a while again. Afterwards, there did not come any reasonable explanation.

– According to the Czech Team, Serbian authorities do not want to let the Czech Team to build big army tents[2] for families. This need came after the situation when the Croatian side closed their border. Afterwards, the area before the border was full of thousands of people in a short while. The area before the border does not provide any shelter for bigger amounts of people. The Czech Team provides just tens of camping tents in case of such crisis for the most vulnerable, e.g. for mothers with babies.

– Serbian authorities want to ban to the Czech Team to use cars on the border (not to cross the border, but to carry supplies to the base from Šid (Шид) for example). It can have devastating impact on logistics.

– The border crossing between Berkasovo and Bapska will be closed soon also because the camp in Opatovac (CR) does not provide enough in winter season. Therefore, a new camp will be opened in Slovanski Brod (CR) where all refugees from Serbia will be transported by trains from Šid. It can be expected that more humanitarian aid will be needed in Šid. To provide decent humanitarian aid in Šid during the winter season, Serbian authorities must change their approach towards refugees and civic society which has an irreplaceable role in such a situation.

[1]     Medical care is officially provided only to volunteers, but the team medics help to refugees too. More in the report.

[2]     These tents would be provided by the Czech Government.

Photo gallery by the author https://goo.gl/photos/APf2y9YrEHtihpFF9