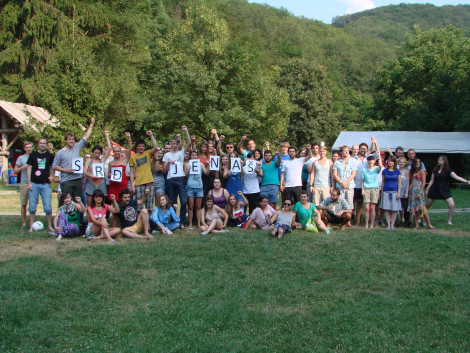 This article has been initially published on the blog “Green Window” by the organisation Zeleni Prozor. In this special issue on the FYEG European Campaign, we tried to gather information on all Summer Camps, FYEG and young greens gatherings that took place all over the Summer in Europe, marking the beginning of the European elections campaign in our movement. You will find here a diaporama of the best pictures of these Summer Camps, and here reports from other Summer Camps. 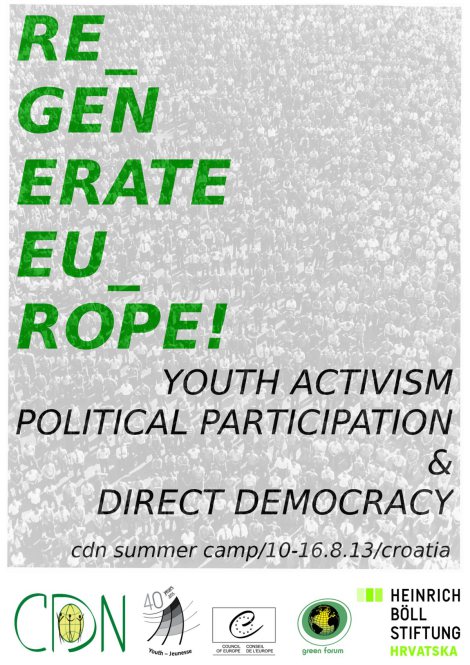 This summer Zeleni prozor had the honor to be the host organisation of CDN’s summer camp “Regenerate Europe! Youth Activism, Political Participation and Direct Democracy” which took place in the mountain house Jankovac from 10th to 16th of August. This event gathered 60 participants from 27 countries with an aim to foster dialogue between youth and green organisations – members of CDN with organisations, which all in their own way initiated or took part in great social movements across Europe – Island, Hungary, Turkey, Russia, Croatia.

Members of the preparatory team from Sweden, Serbia, Moldova, Croatia and Italy made an effort to create a framework of the programme which allowed participants to share their activist experiences, analyze problems they face when they try to use the existing channels of political participation and deconstruct the principles of liberal democracy which restrict citizen participation and the possibilities of social and system change.

Panel discussion titled “Direct Democracy in Existing Systems: The Strange Case of Referendum” with the speakers Đuro Capor (Srđ is ours initiative), Tomislav Domes (Right to the City) and Krassina Demireva (FYEG) at the same time inspired the participants by offering examples of creative and well thought through campaigns and frustrated them because despite the grave efforts of the involved initiatives and citizens themselves their will and the public good they attempted to defend were not taken into consideration and were obstructed by many formal and institutional constraints of the “democratic system” and other political actors involved.

After the panel the participants got a chance to engage more in depth in one of the three workshops on topics of European Citizens’ Initiative, strategies of public advocacy in campaigning on the example of Right to the City campaigns and transitions from grassroots movements to political parties on examples from Grad is Srđ and Za grad.

Participants of summer camp show their support for Srđ is ours! initiative. When political participation in the existing legal framework fails, like it did in the referendum cases mentioned on the panel, the time is right for civil disobedience and fighting with other means which was the topic of the “Europe in flames” part of the program where activists which took part in defending Gezi park in Istanbul, occupied universities in Hungary and Croatia, joined social movements in Iceland and the recent uprisings in Armenia shared their first-hand experiences and motivated others to share experiences from their own countries and recognize the potential for strengthening similar movements in their realities.

With all other system obstructions to the emancipatory movements we recognized the tendency of extreme-right and nationalistic groups rising around Europe as an alarming fact. Similarities between the problems that youth and citizens of western, middle, eastern, southeastern Europe, Caucasus and other post-soviet countries face show that the democratic deficit, corruption and populism are only symptoms of much deeper systematic problems and that international solidarity and merging movements is a necessary precondition for their addressing.

One of the more in depth discussions that came out of the sharing different experiences dealt with police treatment of (politically) active citizens and strategies that the state uses to keep its monopoly on using force and weakening any resistance from citizens as well as demands from more open political participation. During this debate we became more aware of the severe discrepancy between the organized and structured power of the state and the existing systems and the spontaneous and self-organizing civic attempts of resistance.

Spaces of freedom and self-organization

We ourselves tryed to recreate in a smaller scale during this camp. Every participant had an opportunity to use their creativity and work to contribute to making the programme of this camp, to transfer knowledge and motivate others with stories of successes but also failures. Some of the topics on which participants led workshops and lectures were: gender and political participation, direct action, non-violent communication, ecological pragmatism, open source in direct democracy and activism, using social media in activism, entomofagy as sustainable food industry and many others which took most of the non-formal part of the programme, too.

For example, the participants which formed a role-playing game tool-kit group recognized the need of the group for a fun way of dealing with heavy topics of political populism in elections but also the groups own frustrations that came through while attempting to reach group consensus in such a numerous and diverse composition. Other tool-kit groups that had daily meetings also brought conclusions that helped the better functioning of the camp and better understanding of the cultural and regional differences among participants. 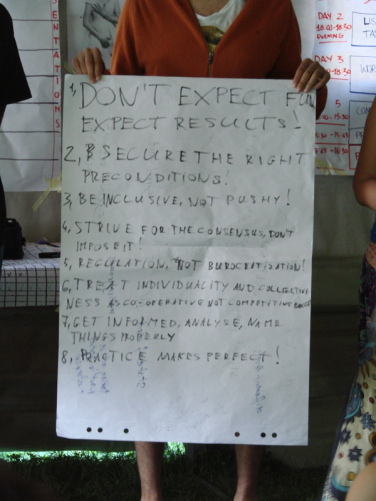 This event strengthened the existing connections between CDN member organisations but also opened up new possibilities of cooperation within regions and between organisations that met for the first time on this camp.

We hope that the newly formed contacts and mutual solidarity continues, we can all use it in the hot (political) European autumn to come!

This event was financially supported by European Youth Foundation of the Council of Europe, Heinrich Böll Stiftung Croatia and Green Forum Sweden.