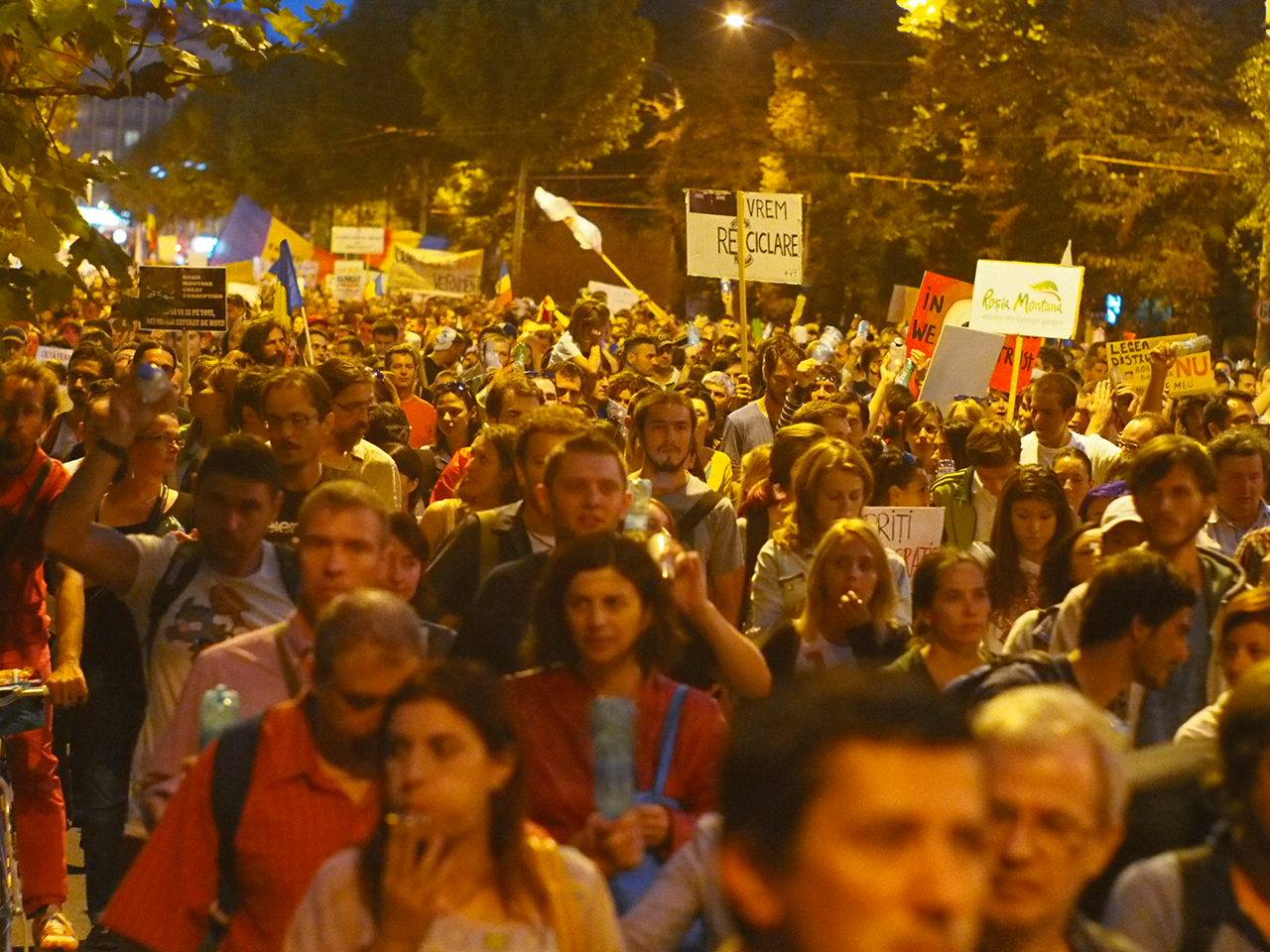 When I was first asked to write about the protests I thought it’s mandatory to come out with specific figures, dates and names. Then I understood all this info can be found easily on the Internet because the international mass media covered the subject very well.

More than that, I don’t think this is the place to convince people that cyanide mining is not an option if you care about nature and about your own health, after all Ziklon B was a cyanide too.

So I realised I have to write a few words about these street protests of ours from my own view. This time my perspective is a street perspective.

It all began on August 27th this year when our Government approved a special law giving green light to a gold mining project operated by Rosia Montana Gold Corporation (RMGC). It was the first time when the Cabinet of the Prime Minister, and the PM himself, was making an institutional step to materialize this initiative. They actually sent this law to be voted in the Parliament and everybody knew it would pass as long as the current Government is backed up by a 70% majority of the Legislative (USL = social-democrats&liberals).

This sensitive topic used to be on the public agenda since the late ’90s but nobody had the guts to really step forward in this direction, even if an entire suite of former and current MPs, PMs and Presidents were advocating for the mining plan. More than that, USL won the last year parlamentary elections with a program containing a specific point on Rosia Montana issue – to dismiss RMGC.

Since the topic was well-known, the irritation felt by the large majority of citizens came naturally. From August 27th the social networks were invaded by messages against the Rosia Montana Gold Corporation and against the entire political class (all major parties supported at some point the RMGC project).

It was not the first time when the people felt anger and threatened with massive protests. Nevertheless, Romania had no tradition of street manifestations in its last 20 years and politicians used to be sure they would have no pressure coming from civil society.

The 1st of September marked the first time in Romanian history when more than 20.000 people came in the streets to shout out loud for an ecological issue. The population was lied too much in these last 15 years on the Rosia Montana topic and couldn’t take it anymore. It was also the first time after the 1989 Revolution (Ceausescu’s death and street violences) when thousands of people were going out spontaneously, without being called upon by an union or for an electoral meeting. Romanians forgot how it feels to stand up for a thing, for a belief, for an idea or for a moral principle. But they woke up!

Yesterday, October 27th, was the 9th Sunday in a row when Bucharest citizens were marching on the streets to share their frustration and their oposition against RMGC project. It was the first time when law enforcement adopted an aggressive attitude and in some cities protesters needed medical assistance.

Still, the most profound memory is tied to a protest from a month ago when it was raining and it was not more than 12 degrees outside. It was called The Umbrella March. It was just awesome. Until this point we had tens of thousands protesters out on streets each and every day in all major cities and also in many others. We had international support too, most of them being part of Romanian diaspora but there were many foreigners to rally to our manifestation.

In first instance the political actors looked like they realised the seriousness of the whole situation and they gave the impression of making a step back. However, no political decision was taken yet to stop the cyanide mining project. Therefore, the protest will continue.

Last but not least, a big opponent of the manifestations is the mass media. The biggest media trusts in Romania are polarized around the current Government and their opposition (democrat-liberal and small right-wing parties). As I previously mentioned, all major parties are asociated with RMGC so their media channels are involved in massive campaigns of discreditation against the protesters. Lucky for us, less and less citizens (especially young people) have confidence in mainstrean media and in politicized shows. That’s how the idea of marching on the streets of big neighborhoods and residential areas appeared. We want to let people know how the things are standing not how the things are presented by media channels.

That’s how I realised that we won’t back down and we won’t accept any kind of compromise regarding Rosia Montana. It is about the four mountains they want to level , it is about the menace of the biggest cyanide lake in Europe, it is about the Roman galleries and our historical/cultural heritage but it is also about the lack of political representation. And we want to change that!