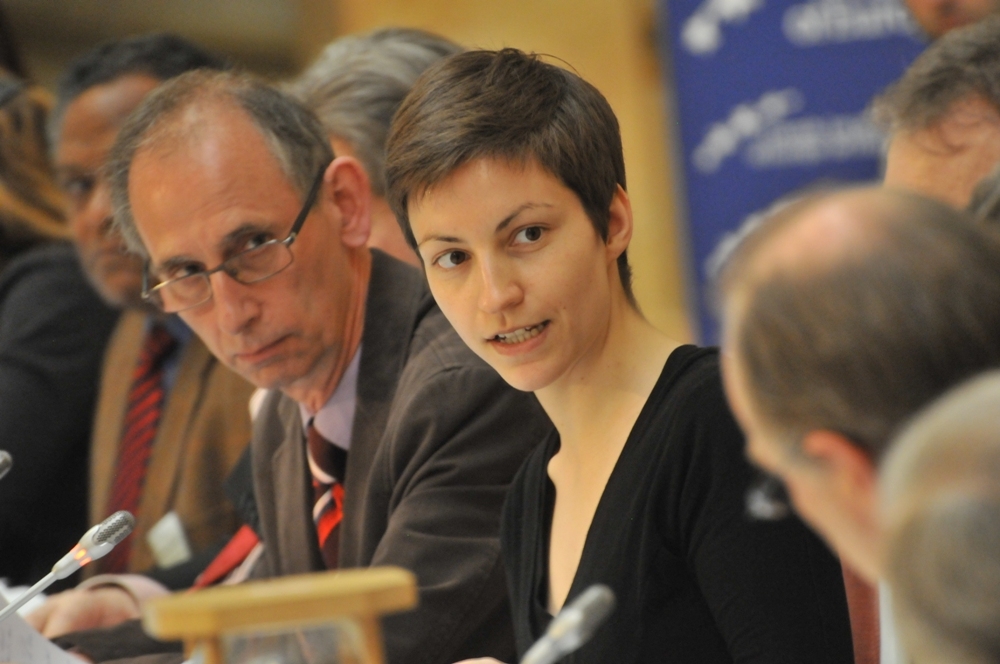 Ska Keller is rather small and isn’t immediately noticed when she enters into a room. But she immediately gets attention when she starts speaking since it is obvious that she speaks with great conviction and knowledge about her topics. Ska works for a dignified migration policy, fair international trade, giving a real chance to Turkey to join the EU in the future and creating a liveable life situation for young people. Especially when it comes to immigration policy Ska’s opinions are in high demand. She just came back from an interview with the BBC and she will now write a piece for CNN. She is only 32 years but is already known as an expert on refugee rights in the European Parliament.

How did this all happen?

Ska was born in former East-Germany, where she had her first experiences with dictatorial regimes as well as right-wing nazis; two things she has despised since then. But soon Ska became involved not only in local activism, but joined the Young Greens and then in 2001 she became active in the Federation of Young European Greens where she was Spokesperson for two years. Already in FYEG, she got the spirit of fighting for global justice and for the rights of the discriminated. Nowadays, Ska continues to fight in the European Parliament as a Green MEP and backing the values of the Young Greens.

But another big topic is coming up. With the Transatlantic Trade and Investment Partnership Agreement (TTIP), a new trade treaty between the EU and the US is coming up that carries the danger of destroying social and environmental standards in the EU. Also something worth of struggling against.

Further on, Ska fights for the rights of Young People. They are currently left alone in their search for perspectives for the future. She fights to give them change and puts the transformation to a just economy at the heart of her program on youth emancipation.

The Green Primary and Ska

For the next European Parliament Elections every big Party-family will have one leading candidate for all EU-Europe. The European Greens have decided that this candidate should be elected by an online-vote in which all people that live in EU-Europe and are over 16 years old can vote. The persons with the highest number of votes who are not from the same nationality will be elected. The voting platform has now been opened since 10th November and will be open until 28th January 2014 on www.greenprimary.eu.

In this short video the process is explained:http://www.youtube.com/watch=e1NBkM01Oe0

FYEG is eager to participate in the Primary and the European young greens voted, in our last General Assembly in last May, for Ska to be the candidate of the youth. We believe that she is the best to represent our ideas well and we want that she puts them on the table when discussing with Martin Schulz and engaging in the  Election Campaign. Furthermore, we are not satisfied by the way European politics are always led by old men and we are willing to end this. Ska represents perfectly the ideas of the European Young Greens. If you believe that youth, refugees and global justice should be put on the table in the European Elections, you should consider to vote for her.

Online-Primaries – The way forward for an European Public Sphere?

The primary is a first-ever experiment in European democracy. As of now, we don’t know whether it will reach people, or it is inclusive enough while remaining as secure as possible. But if we want to develop new tools for direct democracy, then we have to give it a try. Online voting is not yet fully developed and could be manipulated The EGP took these threats very seriously and even engaged a team of professional hackers to test the resistance of the platform.

FYEG believes that this is a good way forward to enhance discussions on an European level. One of the biggest problems of the European Union’s democracy is that it is not debated that much. Many debates happen at the national level. With the open online-Primary, we try to avoid a national outlook of the candidates by  getting an a European-wide support for the candidates. It is an experiment that will enhance the European public sphere, an experiment that makes sense.

So participate, inform yourself about the Primary-Candidates. They will have off-line and on-line debates and there is a lot of material to get to know them better (links below). If you want to do more, contact FYEG under SkaforYOUropey@fyeg.org. If you are interested in the European Spheret and want to do more, there are possibilities: Speak with people about the Primary, Tweet about it; Blog about it; Put some posts onto your social media walls. And spread the European democracy project!

Disclaimer: This article has been translated from an Article of Michael Bloss, Co-Spokesperson of the Federation of Young European Greens