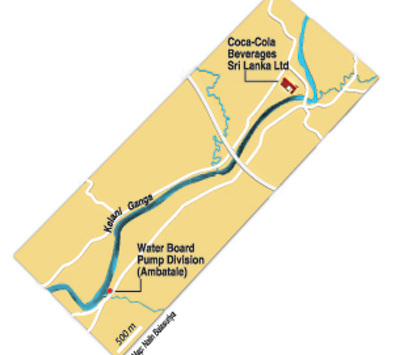 The Central Environmental authority of Sri Lanka has cancelled the environmental license to Coca Cola Sri Lanka to operate in the country. This unprecedented move comes as a result of a devastating oil leak from an underground pipe in a Coca Cola production facility close to Colombo. The National Water Supply and Drainage Board (NWDB) of Sri Lanka said that the water supply to three Colombo District Municipal Council areas had been restricted on 16th of August 2015 due to oil contamination in the Kelani River.  The areas of Colombo, Dehiwela, Mount Lavinia and Kotte Municipal Council have been affected.

According to Sri Lankan media sources, the oil leak occurred following a fault in the maintenance work carried out at the Coca- Cola plant situated at Biyagama, close to Colombo.

US government officials are exerting pressure on Sri Lanka to suspend the cancellation and grant some concessions to the factory according the national media. According to the media: “The Board’s deputy general manager, western production, Ranjith Perera, who is based at the Ambatale plant, said that despite the beverage company claiming that there had been a leak in one of its oil tanks his officers had not been able to find anything that would support this explanation. “ Officers from the NWDB, CEA and the police went to the company to check and were not able to find the source of the leak. Even if there was a leakage it is not acceptable,” Perera said, adding that the company was CEA-approved and thus should have precautionary measures planned in case of such a leak.”

Following the cancellation of the operation license to Coca Cola Sri Lanka, the Central Environmental Authority of Sri Lanka has fined the multi-national giant for nearly 1 billion Sri Lankan Ruppes (close to 6.58 Million Euros). This decision is welcomed by the Sri Lanka Green Alliance in the context of Coca Cola’s role in recognizing water as a commodity and not a right. Coca Cola has run into similar legal issues in South Asia before, namely in India. Earlier this year Coca Cola was forced to close its bottling factory in Uttar Pradesh, India for extracting groundwater above legal limits and polluting the environment with toxic effluents.Now it has been reported that multinational company Coca-Cola is pressurizing the government after the Central Environmental Authority cancelled the environment protection licence of its factory.

Thee Sri Lanka Green Alliance along with other interest group welcome the decision by the new government of Sri Lanka and strongly reiterate the need to make water a basic human right in the upcoming constitutional reforms in the parliament.

Note: Sri Lanka, a bio-diversity hot spot, elected a new pro-democratic and socialist president in January and defeated the authoritarian regime. The defeated regime was again made to lose the general parliamentary in August. The new government included a high level of ecological wisdom in the manifesto for the next 5 years. The only politically green group in Sri Lanka, the Sri Lanka Green Alliance, a group of political activists trying to promote a green future for Sri Lanka, has been campaigning for a pro-democratic government for years.