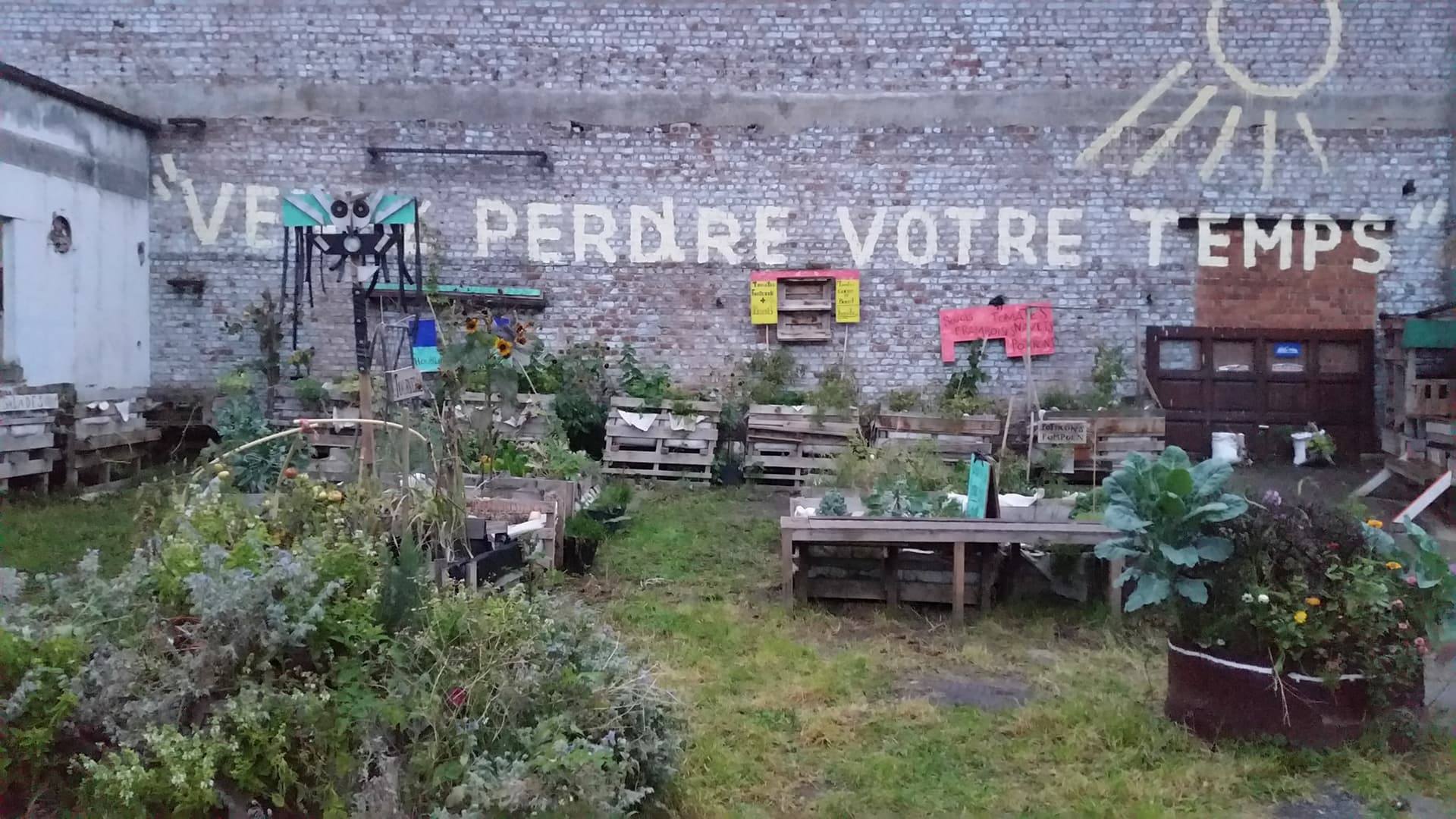 The Climate Change Working Group of FYEG will focus this year on sustainable agriculture. An important topic in this respect are urban gardens. They are a potential source of local food but have much more benefits, that will be addressed in this article. They can even be considered an example of the commons, another topic that FYEG will be focusing on in the coming year. What are the commons, and why are they important?

The notion of the ‘commons’ has grown in popularity since the 1970s in economic and political theory, with the notorious work of Hardin (1968) on the tragedy of the commons (a common resource, i.e. common land, the atmosphere, oceans…, will deteriorate when individuals act according to self-interest only), and of Ostrom (1990) on their governance (the users of the common resource can design systems of governance through which they prevent the deterioration or depletion). This notion has however outgrown academia and gets practical applications in local political and economic initiatives. In Belgium, the founder of the peer-to-peer movement Michel Bauwens and Yurek Onzia (2017) have just finished a ‘Commons transition plan for the city of Gent’, in which they mapped more than 500 citizen initiatives of the commons in Gent alone. These authors define the commons as shared goods that are protected, produced and managed by a community, as alternative to the market and the state (Bauwens & Onzia, 2017). Politicians, academia and citizens consider the commons as a way the reinvigorate democracy and build a more sustainable society (Bauwens & Onzia, 2017; Helfrich et al, 2012; White & Standaert, 2016; Colding & Barthel, 2013). Sustainability is now more relevant than ever with climate change posing enormous challenges to cities. Creative solutions and collaborations between citizens and politicians might be the key for building resilient, ‘future-proof’ cities (Colding & Barthel, 2013).

By way of a literature review, this article will address the following question: what is the contribution of the urban commons to ecological citizenship? With a growing number of people moving to cities, biodiversity and ecosystems are reduced. The general shift towards private property rights in cities leads to fewer examples of lands being managed as commons. This in turn alienates urban populations from nature and makes them less willing to invest in the environment (Colding & Barthel, 2013). The reconnection of humans to nature might be critical for decision-making that takes the environment into account (Colding, 2011). An important task in this respect is to bring nature back into the city and make cities more self-sufficient, e.g. concerning food (Barthel, Parker & Ernstson, 2015). Urban green commons can make visible the dependence of humans on nature and increase ecological knowledge and environmental awareness (Colding & Barthel, 2013).  Urban gardens bring a lot of these aspects together: they can be considered commons (Eizenberg, 2012; Colding & Barthel, 2013; Colding et al, 2013) and are places where citizens work together to produce their own food, at the same time reconnecting with nature and engaging in local democratic practices (Renting, Schermer & Rossi, 2012; Welsh & MacRae, 1998; Pudup, 2008; Krasny & Tidball, 2009; Bendt, Barthel & Colding, 2013). 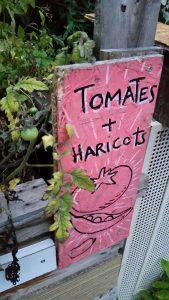 Ecological citizenship is understood as “the fulfillment of ecological aims in a city concerned with both caring for ecosystems and building better civic communities” (Light, 2003, p. 57). Citizenship is “a virtue met by active participation at some level of public affairs” (Light, 2003, p. 51). It refers to the relationship between an individual and a larger entity, such as a community or a state. It encompasses the wider notion of social solidarity, of civic debate, of co-ordination, sacrifice and contribution to this larger whole (DeLind, 2002).

Do the commons and more specifically urban gardens contribute to citizenship values? This seems at least likely.  In the process of gardening, people connect with each-other, develop social bonds and evolve into a community. They learn from each-other and develop their agency, become political activists and aware citizens (Eizenberg, 2012). In a community, individual differences should be tolerated and in the practice of cooperation, a sense of ‘we-ness’ and of citizenship emerge (DeLind, 2002). Community gardens are places where the cultural becomes political and where conflicts arise that render visible the politics of everyday life. People connect with nature and their community, engage with local NGOs and municipal authorities and evolve from passive consumers into ‘food citizens’ (Baker, 2004). Healthy food is considered a public good, inequity and social and environmental injustices are addressed, and people reclaim the commons and the right to the city. Gardening thus becomes a political act, that fosters civic engagement and creates inclusive spaces for public participation and social learning, where people cultivate the political and social skills necessary for effective citizenship (McClintock, 2014).

The other component of “ecological citizenship” is ‘ecological’. Do the commons contribute to ecological values and the taking care of the earth? Civic ecology practices are local environmental stewardship actions to enhance the green environment and local biodiversity, and contribute to psychological well-being and a sense of community (Krasny & Tidball, 2012). The notion of ‘environmental stewardship’ is important in this respect. This is the “engaged effort, required of each of us, to act as to protect common natural resources for the sake of other people, near and far, present and future” (Di Paola, 2013, p. 2). A citizen that practices environmental stewardship takes “full and balanced account of the interests of society, future generations, and other species, as well as of private needs, and accepts significant answerability to society” (Worrell and Appleby, 2000, p. 269). It leads to a change in our way of thinking: from humans as apart from and destructive of the environment, to humans as a part of and stewards of the environment (Krasny & Tidball, 2012).

Gardening makes environmental stewardship practically and psychologically manageable and leads to the development of important environmental values (Di Paola, 2013). Urban gardens are often constructed on neglected and degenerated urban spaces (Schmelzkopf, 1995; Schmelzkopf, 2002). In their regeneration, citizens (re)claim their right to the city (Ghose & Pettygrove, 2014) and develop a sense of self-respect and community (Schukoske, 1999). The restoration leads to the creation of meaningful and mutually beneficial human-nature relationships, where we understand ourselves as beneficial members of a community of life (Tanasescu, 2017). Gardeners develop a strong place-attachment and identification with the living environment. Urban gardens are thus spaces that de-alienate the physical and social environments of the city (Eizenberg, 2012). In short, the management of urban greens as commons promotes environmental stewardship and the understanding about links between ecosystems and people, and counters the growing disconnect of urban residents from nature (Colding, 2011). 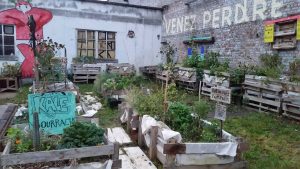 The germs of future-proof sustainable cities

To conclude, based on the findings of studies in various (mostly North American) contexts, urban gardens can be considered as sites where ecological citizenship is practiced and reinforced. They are local labs where citizens experiment and build together the germs of future-proof cities. Cities that are both ecologically and socially sustainable. So let’s all connect with our neighbours and see whether there’s a small patch of land in our neighbourhood that could use a vegetable make-over! 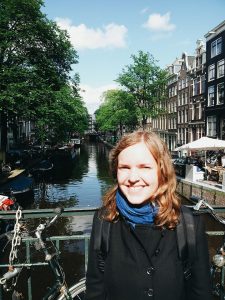 Eva studies Political Science in Brussels and writes her master thesis on urban gardens and the commons. She also works for the GreenTeam of the university, where she works together with fellow-students to make the university more sustainable. Next to that, she loves dancing, reading, laughing, nature and dreaming for a more green and just planet.