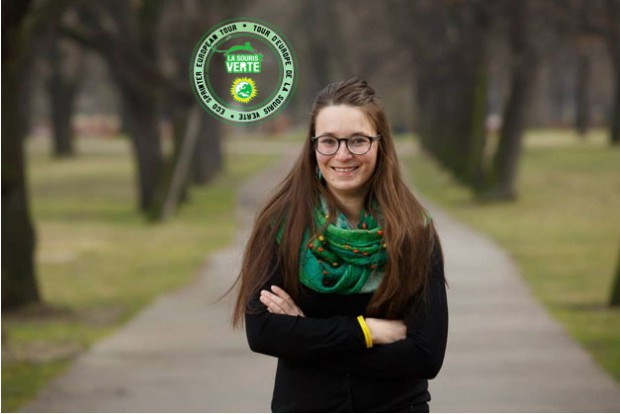 From the 22 to the 25th of May, 27 countries and over 500 million inhabitants will be given the choice to elect their 751 representatives at the European Parliament. But ow is it happening all over Europe ? Are campaigning, political issues, and Euroscepticism the same in Spain and Belgium, Lithuania and Great Britain ? How do young activists, young candidates and campaigners see their  political engagement at a week of the elections?  Together with La Souris Verte, the French Young Greens magazine, we are travelling Europe to get you inputs and insights from all over, from those who are making the elections from the inside. Today, an Interview with Sara, a young candidate and activist from Czech Republic.

The Ecosprinter/La Souris Verte : Hi Sára , how are you? Who are you?

Sara: I am fine, quite busy by now but fine. I am a young green candidate and activist. I am running in the European elections and I am number 10 on the candidate list.

Ecosprinter/La Souris Verte : So you are engaged in the Czech Republic in the European campaign. How do you feel about it?

Sara: I feel great, I am running in the European elections so we are now creating our campaign. We are also cooperating with the Green Party so I am definitely very interesting to see how the campaign actually works, etc.

The Ecosprinter/La Souris Verte : What are the main challenges in in the Czech Republic?

Sara : The main challenges in my opinion are to motivate and empower other young people to join our movement, to show them that politics is not just for old men, that they actually can influence the public opinion. We also want to speak about the rise of racism in Europe, youth unemployment and more generally about Europe, how the EU works, etc.

Ecosprinter/La Souris Verte: Why did you choose to engage yourself with this campaign/ this team?

Sara : Because I think our campaign team is great, we can make a good campaign and we would like to change the narrative in my country. Firstly we would like to show the power and capability of young people, secondly we want to create a completely new discourse about green policy in the Czech Republic. We will be presenting the propositions of the Greens/EFA in the European Parliament and we will also be explaining its impacts on Czech politics.

The Ecosprinter/La Souris Verte : Is there is one particular proposition that is important for you among those presented in the campaign project ?

The Ecosprinter/La Souris Verte : Tomorrow, how do you see Europe ?

Sara : Tomorrow, I definitely see a green Europe, more democracy and solidarity and less intolerance and differences between people in Europe. I see also more chances and opportunities for young people and young families. Outside the European Union I see peaceful and well developped countries, no dictatorship and occupation.

Overall GREEN EUROPE IS THE ONLY FUTURE I see for my beloved continent.