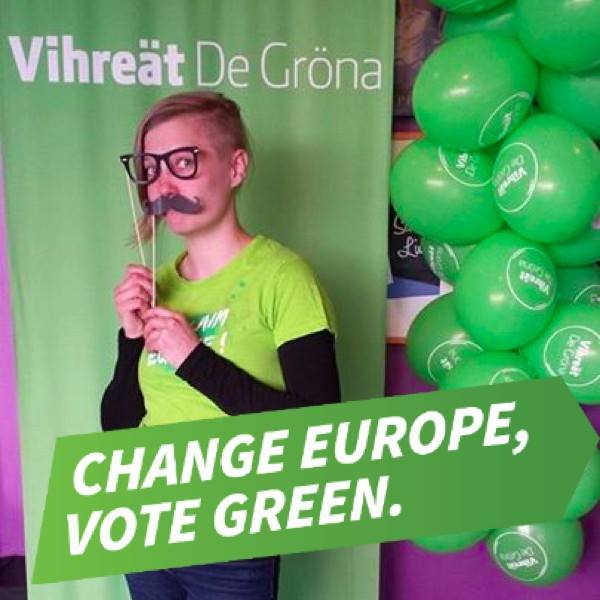 From the 22 to the 25th of May, 27 countries and over 500 million inhabitants will be given the choice to elect their 751 representatives at the European Parliament. But ow is it happening all over Europe ? Are campaigning, political issues, and Euroscepticism the same in Spain and Belgium, Lithuania and Great Britain ? How do young activists, young candidates and campaigners see their  political engagement at a week of the elections?  Together with La Souris Verte, the French Young Greens magazine, we are travelling Europe to get you inputs and insights from all over, from those who are making the elections from the inside. Today, an Interview with Milja, the secretary General of the young greens of Finland.

Ecosprinter/La Souris Verte : Hi Milja. , how are you ? Who are you ?

Hi! I’m Milja and I’m the Secretary General at the Federation of Green Youth and Students in Finland. I’m also the Campaign coordinator for the European Elections and responsible for the campaign of Finnish Young Greens. I’m full of energy and feeling very enthusiastic about the campaign, thanks for asking !

Ecosprinter/La Souris Verte: So you are engaged in Finland in the European campaign. How do you feel about it? What are the main challenges in Finland?

As I said, I’m very optimistic and enthusiastic about the campaign right now. I’m very proud that we European Young Greens are the only ones doing a real all European, transnational campaign with same objectives and themes all over Europe. We’ve participated in the FYEG campaign in the social media and done a few Actions too. It’s been very inspiring.

Probably the two main challenges in Finland for us will be how we will get young people to vote and how will we get them to vote green. The Finnish Greens have now two MEP’s and it’s going to take a huge effort from all of us here to be able to stay on that number. But I’m optimistic that we will do that, we have a good spirit here right now and a great candidate list.

Ecosprinter/La Souris Verte: Why did you choose to engage yourself with this campaign/ this team?

It comes through my position at the Finnish Young Greens’ organization to also be the head of our campaign team. But the reason I love this job is that you get to engage in these kind of activities and work hard for the young candidates and a greener younger Europe.

I think that the best and most important thing in the campaign project is that it is truly a European effort. There are a lot of tools -big and small- how anyone anywhere can join the campaign in their own way and still present the same message and idea of a better Europe for all of us.

Tomorrow I hope to see a more open, more democratic and more equal Europe. Europe where the young people have a future and a possibility to determine it themselves. Europe that takes care of it’s citizens, respects human rights and is determined to fight climate change, the biggest challenge of our time.