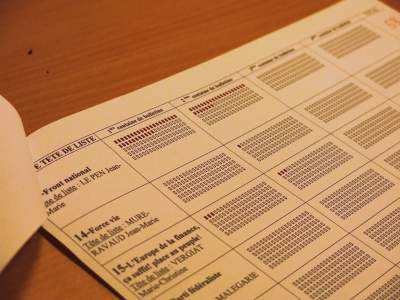 The European elections have yielded mixed results, but it is clear that the EU is falling short in its aims to engage citizens. To address this, long overdue reforms are needed to make the EU more democratic, and a particular focus should be placed on youth to inform them but especially to provide real prospects for their future.

_ by Maggie Maria Dokupilova, Secretary General of the Federation of Young European Greens, and Krassina Demireva, Michael Bloss, FYEG Co-spokespersons. This article has been published as well on the Green European Journal.

The European Parliament elections were a success and a shock. The elections have shown positive trends for Greens in Europe in terms of getting Green members of the European Parliament from more countries. Greens managed to keep more or less the same number of MEPs elected in the group, even though the number of European Parliament seats decreased after recalculation according to Lisbon treaty. However, the Nazis and right-wing populist parties have gained a lot of votes in Europe. It is frightening thatmany young people voted for the far right[1]. This reflects the challenges that were foreseeable in the last five years, but the European Union has not been able to come up with successful solutions.

We believe that the EU needs to focus particularly on youth in the next years. Young people will not be seduced by superficial campaigning only in the last six months before the elections, rather, they need to see credible policies that will be beneficial to them in the next five years. Otherwise, we will lose even more people in the fight for a Green Europe of solidarity. In order to engage with young people, we name some policy measures that need to be discussed in the coming year.

In the last five years, the EU has failed to generate interest in, and trust of, EU representatives

The European elections were held at a time of deep social and economic crisis. In the last couple of years we have experiencedausterity measures that resulted in public expenditure reduction, and huge unemployment. Social welfare was weakened and decisions were taken by political elites, without the citizens exercising their democratic rights.

After the last elections, the rise of voters of the far-right parties shocked Europe. Back then, the debate focused on getting Europe closer to the people and showing that Europe can deliver a better future to the people. Unfortunately, a lot of the promises proved to be only lip service. Politicians in Europe did not manage to end austerity; instead, the unpopular decisions on the future of Europe have been offloaded onto Europe’s shoulders, decreasing its popularity even further. The consequences of the economic and social crisis in Europe combined with the democratic deficit, inevitably led to rising euroscepticm and right-wing populism. Blaming Europe for the crisis, spreading hatred, racism, and homophobia, some national parties successfully managed to enter the European Parliament.

The European elections showedvoting turnout at 43.1%. The electoral abstention was a consequence of disappointed and disillusioned citizens, who lost their trust in ballot papers, in politicians and politics as a whole due to mainstreaming and implementation of ineffective austerity policies, persistent present corruption scandals, and a lack of transparency in decision making.

Europe, which has not delivered enough reliability to gain people’s trust in the last five years, must show now that it is capable of solving the huge challenges of the social, ecological and economic crisis. This will create the credibility that it needs.

The trust in the European project can be regained by more citizens’ participation. If we take a look at history, today European citizens have more opportunities than ever to influence political decisions on a European level. The introduction of the European Citizens’ Initiative, and the new procedure for the European Commission’s president, were a way to bring the EU closer to its citizens. However, judging from the results of the European elections, this is just a step towards more participatory democracy in Europe. We need institutional reforms to ensure participatory, transparent and democratic decision-making processes on a European level. For example transnational lists could make the European elections more focused on the European parties and agenda. The European Parliament should be given legislative powers. The Commission is not sufficiently accountable, but rather is surrounded by lobbies. This institution should not to be composed of national representatives, and get a two thirds confidence vote of the European Parliament. We call for a New Convention that is open to civil society and citizen proposals. This Convention should be ratified at the end by an EU-wide referendum.

Steps towards a solution: informing, educating and engaging citizens from the earliest age

Media also play a key role in bringing the EU closer to its people and has not been good at doing this job. Mentioning the point of lacking proper European media, national media still play crucial role, but there is a problem: the commercial media do not cover what is in the “public interest” anymore, but rather promote simple consumerist propaganda. There is a huge lack of information being provided about what is going on in the EU in the national media. EU matters should be allocated reasonable space by all news outlets.

Education should serve as the cornerstone for a solution. Focus on European matters, on the EU as an organisation sui generis, has to be added into curricula from an early educational stage. This is a key for people to develop a proper understanding and interest in what is happening in the EU and how it affects their lives.

The EU has to break out of its bubble, which is flying somewhere high above ordinary citizens, and try to get back on the ground in order to reach them. But most importantly, this bubble should burst.

[1] ‘Polls show that Marine Le Pen is the most popular leader for voters  between the ages 18-24. Last Sunday, three out of 10 French voters under 35  voted for the National Front  (FN)’