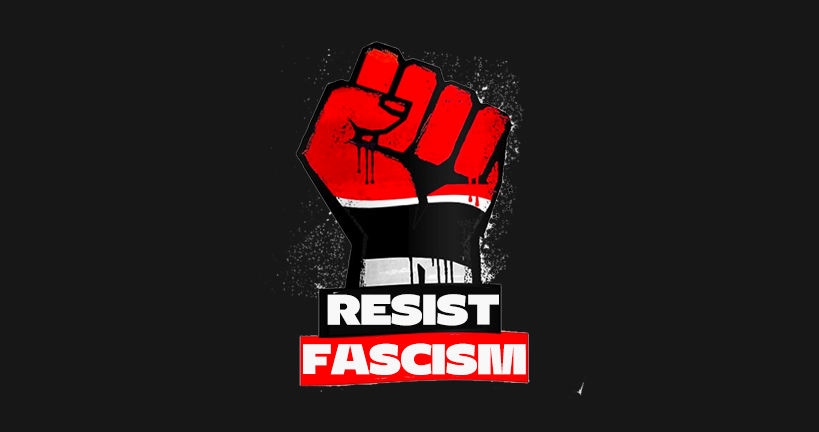 Fascism is a problem across Europe – its threat needs answers

Fascism has regained a foothold in Europe1. Both ‘lone wolf’ terrorists and organisations actively identify and engage with this growing movement. They form international networks, spreading and replicating each other’s rhetoric, political, financial and communication strategies. As the movement grows, they become bolder and organise public meetings, processions and even festivals where racism and replacement theories are normalised and violence is idealised.

We are certain the reader has local experiences with the revival of fascism. In our cities, Ghent and Wiesbaden, we see the alarming growth of fascist groups and try to organise and act to defeat it.

The extreme-right’s growth in Ghent (Belgium)

Belgium was one of the first European countries where an openly racist party saw political success after World War II. In 2019, the two main far-right parties in Belgium (N-VA and Vlaams Belang) gained 42% of Flemish votes. The extreme-right party Vlaams Belang beat its electoral success of 24 November 1991 – a day that became known in Belgian culture as “Black Sunday”.

In this context, Ghent, where a coalition of progressives holds power, feels like a safe space. Ghent provides a hopeful alternative to the right-wing governance of Flanders, but the progressive local authority’s influence on the lives of Ghentians is overshadowed by the policies of hostile higher authorities.

Meanwhile, at the University of Ghent, right-wing student parties constrain the free speech of others with online intimidation campaigns whilst continuing  to challenge societal norms and legal lines, for example by organising sexist and racist lectures. In 2018, journalists shed light on the inner workings of the student party “Schild en Vrienden” after which several members were prosecuted for illegal weapons ownership and incitement to hate. The leader of the group was later invited to join Vlaams Belang and used his notoriety to become elected. In the federal government, he uses every opportunity to vilify and dehumanise migrants.

These examples highlight how right-wing extremism is active and influential in Belgium. Although Ghent may feel as a safe haven of progressives, in reality it is not. In Ghent, Vlaams Belang have launched a local youth group, whilst their followers continue to apply for board positions within the local university. Still, our neighbours in Germany have experienced even more worrisome confrontations with right-wing initiatives.

Fascist murders and their investigation in Wiesbaden (Germany)

Every month, Wiesbaden, the capital of Hesse, hosts two Committees of Inquiry in the Hessian state parliament. The committees inquire into the fascist murders of the president of the governmental district of Kassel in 2019 and of nine people in Hanau in February 2020. Their names are Walter Lübcke, Vili Viorel Păun, Gökhan Gültekin, Fatih Saraçoğlu, Ferhat Unvar, Sedat Gürbüz, Hamza Kurtović, Said Nesar Hashemi, Kaloyan Velkov and Mercedes Kierpacz. Both attacks stem from right-wing extremism, and the perpetrator in Hanau openly displayed his fascist, anti-Semitic, misogynistic, xenophobic, Islamophobic and conspiracy-driven worldview online.

According to the Federal Criminal Police Office, these are just two of over a thousand right-wing crimes registered in Germany in February 2020 alone2. The committees’ investigations in Wiesbaden aim to provide full clarity about the nature and circumstances of the crimes. More fundamentally, they strive to identify and address the societal causes of these murders.

Once a month, the relatives of the victims arrive in Wiesbaden to follow the Committees of Inquiry, hoping to find answers on why their loved ones were killed. The work of the committees is important to ease their pain, and shows us that these murders are an attack against all of us. Fascism poses a structural threat and is a danger to a peaceful, democratic society and the lives of our people. We must defeat it.

How should we Europeans respond to the growing threat of fascism?

Fascism has historically thrived on poverty and inequality. As the middle class falters, feelings of mistrust and cultural pessimism are directed towards politically weaker social groups. Wage stagnation and the inability to fundamentally alter our economic system post-2008, combined with the current inflation and related increase in poverty and inequality have created a potent breeding ground for fascism. The failure of many European governments to provide effective solutions to societal issues renders our states particularly vulnerable to fascism. The right-wing populist parties who have entered the European political sphere since the beginning of the century are becoming more and more mainstream. There is a serious risk that these parties will continue to profit from the current crises, as illustrated by the electoral victory of Giorgia Meloni who has openly praised Mussolini.

As young progressives, our first priority should be to fight for a realistic alternative for the direction in which our society is headed. We must have a strong, positive narrative built on the best answers for pressing social issues. At a grassroots level, we should implement policies which appeal to as broad a cross-section of society as possible.

We call for better regulation and monitoring of online spaces to reduce opportunities for fascist rhetoric and hate speech to spread. These spaces remain mostly unregulated while the current profit-driven algorithms of these platforms facilitate the success of fascist propaganda. Terrorist attacks will not stop until the functioning of these networks and rhetoric is exposed, and ultimately, defeated.

We must remain resolute and clear-headed. The prevalence of fascist groups on the internet does not (as of yet) reflect broad public support. Fascist demonstrations should be matched by larger counter-protests to make clear that their narrative does not have the support of the people. Our own story – one of hope, care, inclusivity and cooperation above competition – should always be at the forefront.

When in power, anti-fascists should focus on making the appeal of fascism negligible. Only good governance can consolidate democracies for the long run. Active engagement of citizens is essential to stopping right-wing extremist groups from expanding, distorting our culture, compromising the rights of minorities and spreading hatred. We can do this, together.

1 We use the term fascism in the Merriam-Webster definition, i‧e. “as a political philosophy, movement, or regime that exalts nation and often race above the individual and that stands for a centralised autocratic government headed by a dictatorial leader, severe economic and social regimentation, and forcible suppression of opposition.