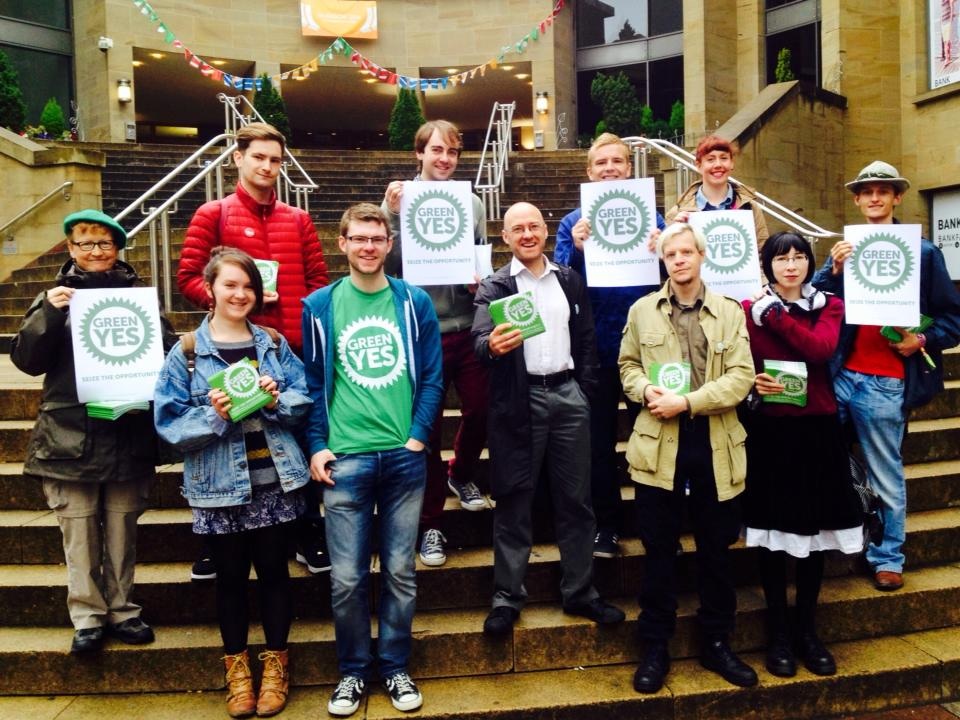 For many outside of Scotland, including neighbouring countries such as Ireland, England and Norway, the motivations behind Scottish independence would seem to run counter to Green values.

Green politics rejects nationalism outright and stresses cooperation between nations, but in the case of Britain, Greens argue that the nation is fundamentally broken and power too concentrated amongst a London elite. With its renewable energy potential Scotland is, they argue, a model for what a green state might look like. Unlike other secession movements in Europe, many in Scotland see independence not as a way of preserving cultural identity or preserving prosperity but as a means of starting again from scratch.

This desire has been helped by the increasing perception that the Labour, Liberal Democrat and Conservative parties who support staying in the United Kingdom are all both broadly similar and run by an elite of men produced by top universities in England. This means that they have trouble speaking to voters in Wales and Scotland who do not feel represented, or that London’s political leaders understand their problems. This was even the basis on which the Scottish Green Party left the UK Green Party in the 1990s, feeling that it was better for Scotland to self-organise.

Although they share a group with Greens in Brussels, the Scottish National Party are a long way from being a green party in any sense of the word. Their economic plans are based heavily on the expansion of North Sea oil drilling, and their social policies are no more progressive than those offered by the majority of European centrist parties. What unites the Greens, the SNP and many other people in Scotland is a single aim. The idea that Scotland would be better governed by a parliament in Edinburgh than as a minority representation in the deeply conservative Westminster system.

It is a cruel irony for Greens in Scotland that one policy, independence, which had never guided the actions of the party beyond an agreement on basic democratic principles, should grant it more media time than ever before. A knock on effect of this has been that key Green messages on social justice and democratic reform have found support amongst the general public, with an uneasy alliance with the SNP on the question of oil until after the vote.

Many of the big scare stories produced by the UK government about banking and oil revenue are of little concern to Greens, as green policy involves both winding down the oil industry and decentralizing the banking system towards a more sustainable economy. Whilst the SNP have sought to ally fears about the Scottish economy, the Greens have been honest in their view that independence is only the first step towards transforming Scotland completely.

One thing neither the Greens nor the SNP can do is claim sole responsibility for what is happening in Scotland. The launch of the Yes campaign for independence two years ago was an awkward affair featuring folk-rock and second-rate celebrities, but in 24 months Scotland has come alive with a new kind of activism unseen in Britain since the postwar period of mass labour politics. 97 per cent of those eligible to vote have registered to do so, and everywhere from schools to big banks and fishing communities people are talking about politics. Without meaning to, the SNP have created a democratic revolution on their own doorstep, and whatever happens on referendum day Scotland will never be the same again.

The next Scottish elections in 2016 look like they will be profitable for the Greens. Increased profile and distrust of the very negative campaign run by the Labour party means that many people are considering voting Green for the first time. Independent or otherwise, co-convener Patrick Harvie and whoever is elected alongside him could end up playing a role in the next Scottish government.

Even more promisingly for political diversity, there are discussions going on amongst socialists about creating a new type of party that would stand for parliament and give more diversity to a progressive bloc in which the Greens often find themselves the only members. The result of the referendum is too close to call, but Scottish politics has been changed forever.

Dominic Hinde
Dominic Hinde is a former Green candidate. He is now a freelance journalist reporting on the referendum.