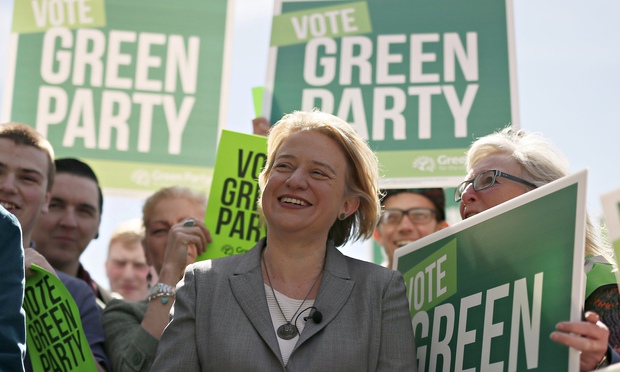 On May 7, we will see one of the most hotly contested general elections in the history of the UK with no party expected to win an outright majority in the parliament’s House of Commons. The Green Party of England & Wales and the Green parties of Scotland and Northern Ireland are at the heart of this contest challenging austerity and calling for more decisive action on climate change.

At present the Green Party of England and Wales has one MP in parliament, Caroline Lucas, who has been the perfect example of what someone in that position should do working closely with constituents and challenging the outgoing government on their decisions to cut social welfare and privatise the NHS as well as calling for the renationalisation of the railways.

But today this could change with high expectations for Green MPs in the constituencies of Bristol West and Norwich South, whose candidates, Darren Hall and Lesley Grahame, have been working tirelessly to put across their message for a sustainable future in the UK for the common good. There also could be a few surprises on the cards with Green candidates across the UK placing a positive future for the country. There will also be several local councils hosting elections and there are expectations to see the number of Green councilors grow across the country.

The #GreenSurge has seen the Green Party grow to over 60,000 members, becoming the third largest nationwide party. I myself have seen this impact on the ground helping to form of one of the newest local Green parties, the Elmet & Rothwell Green Party which has only been in existence for around 8 weeks yet has been passionately campaigning for our candidate Dave Brooks and our local election candidates. This swell in the number of members has seen more local activists on the ground working for a sustainable future.

Whatever the outcome tomorrow one thing is looking increasingly likely to change: that is the electoral system. Currently under the first past the post system the two major parties get a disproportionate number of seats in relation to their national vote share, but with the rise of several smaller parties this system no longer works in representing the electoral democratic wishes of the British people. There is an appetite in the UK to move towards proportional representation, and achieving this will be the real victory of the general election.