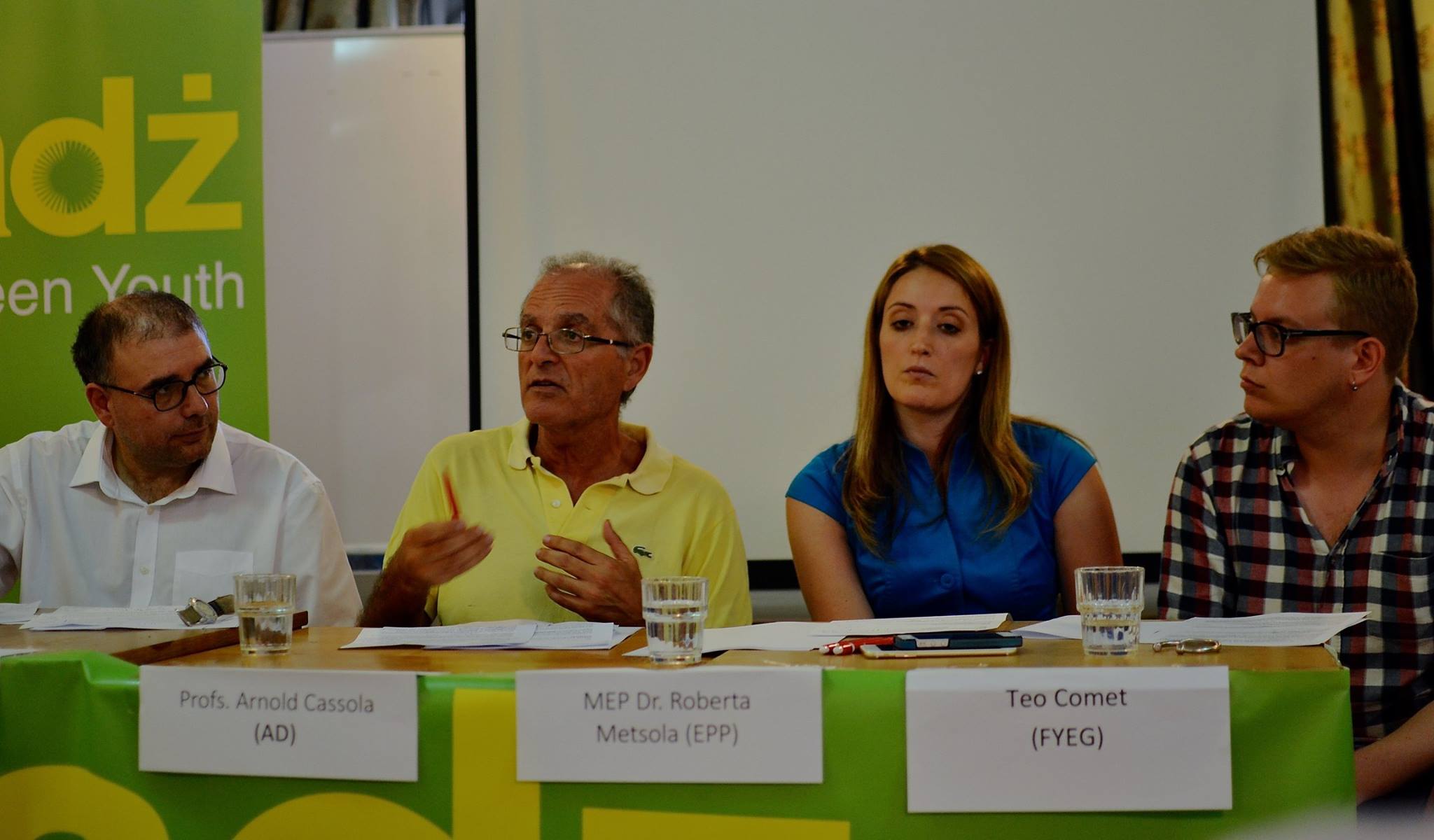 Part II of the series of reports on the #YouthOnMigration seminar in Malta, organized by FYEG and ADZ Green Youth, with participants from the FALAFEL network, a collaboration of various Euro-Mediterranean civil society organizations. (Full Series here)

The prospects and challenges of adopting a common European migration policy were addressed and were tackled from various political perspectives.

Dr. David Zammit emphasized on the root causes of the crisis, which according to him included the current capitalist system that contributed to the economic downfall of states, turning them into failed states, thus forcing people to flee.

Furthermore, he focused on the idea of looking at the current policies from a practical perspective; the notion of cultural wars escalating in society would somehow worsen the situation, thus enhancing integration policies and improving society’s political discourse on how to handle migration and migrants’ rights are essential.

Elaborating the lack of a European migration policy, Prof. Cassola emphasized on reforming the Dublin Regulation (the policy that requires refugees to only seek asylum in the first EU state they enter), saying that the EU needs to focus on relocation and a system of responsibility sharing. He argued that such a system within EU member states should be adopted instead of the current situation where member states are left to deal with the crisis on a voluntary basis.

In a subsequent interview with the Ecosprinter, Prof. Cassola highlighted some of the long-term solutions he mentioned in the panel debate. This included the transition from a militarist approach to a diplomatic way, such as the pursuit of genuine structural engagement with northern African states.

Moreover, a durable key to containing the crisis would be for the EU to promote the processing of humanitarian visas which would help contain the crisis. The idea of the EU and its member states issuing humanitarian visas to refugees in their consulates and embassies abroad would be an ideal and efficient alternative.

(A closer look on Prof. Cassola’s views is published as separate parts of the series.)

Moreover, Prof. Cassola emphasized on considering other factors in searching for stable and deep-rooted solutions, such as poverty and climate change, as these factors contribute to the escalating movement of people in the region.

To him, traditional politicians do not really look for long-term solutions on migration, despite the promise of productive results. This is because there isn’t enough public pressure in pushing for multiculturalism in society, and that the public consensus on migration sees the phenomenon as something disadvantageous.

Political will and enhanced unity is critical

Political will is needed from domestic politicians and from EU officials. And MEP Metsola agreed. Though her major concern was to take an immediate action to stop the drownings in the Mediterranean rather than adopting Cassola’s ambitious approach to the problem. According to her, genuine reform of the Dublin Regulation is not foreseeable in the near future.

She also emphasized on the EU’s lack of unity on the issue. Though she considered a short-term yet sustainable solution; and this is to increase resettlement possibilities. Considering the tens of thousands in legal limbo in the EU, member states need to address this quickly. But unfortunately, the disunity in the recent European Council meeting did not satisfy this.

Furthermore, she agreed with the importance of political will in going beyond adherence to national interests. A commonality of laws in the EU making it a political union is possible. But as long as sovereignty is still considered sacrosanct in the EU, progress will be slow.

Nevertheless, there was a consensus among the panelists over indispensable rights, ranging from freedom of movement to the right to be treated with dignity. They agreed that current policies need to be changed to go in compliance with international law and the basic rights of migrants.

This was especially the case with FYEG, where Teo Comet maintained the organization’s stance on the imperative of the EU to start realizing that social justice policies be an integral part of European legislation.