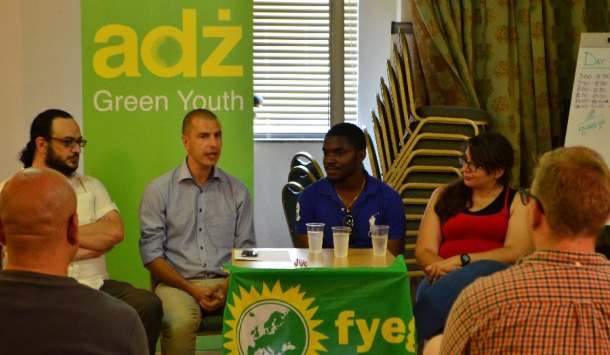 The final part (VI) of the series of reports on the #YouthOnMigration seminar in Malta, organized by FYEG and ADZ Green Youth, with participants from the FALAFEL network, a collaboration of various Euro-Mediterranean civil society organizations. (Full Series here)

FEATURED IMAGE: The training seminar in Malta included lectures and workshops led by actors from civil society and academia. It also included two panel debates, in which this series of articles tackled in the previous parts. The second part was a discussion on inclusion and integration in Malta. Panelists included Maltese politician/writer Robert Callus, journalist/activist Mark Micallef from the Migrant Report, ADZ Green Youth secretary-general Anna Azzopardi, and Daboma Jack, a black Hungarian citizen who had been at the center of media reports in the summer for being a victim of racism in the Maltese islands.

Sad Side of Society

On 1 July, Daboma Jack, a Hungarian citizen, chemical engineer studying and residing in Malta, was trying to organize a queue at a Valletta bus terminal when he was assaulted by a Maltese woman who, according to Mr. Jack and eye-witnesses, spat at him, slapped him and yelled at him to “go back to your country”. When he called for help and the police showed up, he was arrested while the assaulter ran away. He started crying and people clapped as he was taken away by the police in front of his daughter. According to him, it was not his first time experiencing racism, but that incident was the height of it all. The event subsequently triggered a societal debate on integration in the country.

On the 6th day of the ‪#‎YouthOnMigration training, the participants witnessed another panel debate, this time on integration and migration policies in Malta. And we had the privilege to meet Daboma Jack speak with the panel. He asked the audience as to why people cling to fear and xenophobia when faced with the prospects of handling migration in society. He also criticized the police, saying that the law enforcement system is not fulfilling its duty to society. “There are jobs where you can’t just run away from responsibility,” he said.

The majority who resort to anti-immigrant sentiments are due to the “high” numbers and statistics they see, which give them a notion of an “invasion” of migrants. Most of these people are uneducated and resort to outlandish claims, such as blacks having low IQ or that the Jews are actually sending the immigrants.

This is according to Robert Callus, a Maltese politician/writer who was part of the panel. He claimed that this fear-mongering is one of the aspects of a confused society. He said that they may not be genuine racists, but their concerns would be understandable, for they may be genuinely terrified because fear has been taken advantage of and used as a tool against them.

And behavioral scientists can attest to that. Amid the media reports surrounding Daboma Jack, an op-ed statement by the Malta Union of Professional Psychologists (in collaboration with the Maltese Psychological Association) expressed that “the people most prone to having racist and xenophobic beliefs are those more likely to have a history of low educational achievement.”

What society needs to do is to change the political discourse; educate themselves and overturn the confusion. Malta does not have a working and sustainable integration law. That is a huge hole in the country’s system, and fixing this flaw should be the first step. When enacting efficient policies for a more inclusive society, it must prioritize education: every native must know that migration is a natural phenomenon and that it cannot be stopped, but living prosperously in diversity is possible.

But societies are currently being suffocated by xenophobia. The recent wave of rightist populist parties have begun to contribute to the growth of racist ideas, and that there are currently no genuine actions in stopping these notions. There is also no political will to take brave humane steps to stop the inequalities and atrocities. And this continuing inaction by governments are only benefiting criminals taking advantage of society’s most vulnerable people. Unless communities undertake an unprecedented initiative for change, there will be no progress.

Some Hope for Humanity

But first and foremost, change begins with the individual. During the panel, Daboma Jack stated that he had stopped the hate and had already forgiven the woman. He turned those words into actions yesterday (13 August), when he and his aggressor withdrew complaints over the bus terminus incident. The woman who racially assaulted him apologized and embraced him in court as the two withdrew the charges against each other.

Apologies may have been accepted, but for him, more actions are needed. Conventions and events like the #YouthOnMigration seminar are a good step in initiating action, as it helps create awareness for society and incentivizes the younger generation to become engaged in humanitarian causes.

The youth is important. They are the future drivers of society and giving them a sense of enlightenment should be a priority. Intercultural school trips and exchange programs for students as a form of tuition are essential to break national and cultural boundaries. Opening their minds and broadening their horizons into recognizing the true potentials of a diverse and integrated community are important steps into accepting each individual human being for who they are.

Daboma Jack is a family man. And it is terrible that he was the victim of racism in the country; abused by law enforcement in front of his loved ones. For him, one of the principles of life is to love and to be happy. He is a proud parent and believes that as parents – as role models – charity begins at home. No person wants to do nothing, because a part of human nature urges us to pursue something. And it is up to us to raise and educate the next generation on what that “something” should be.