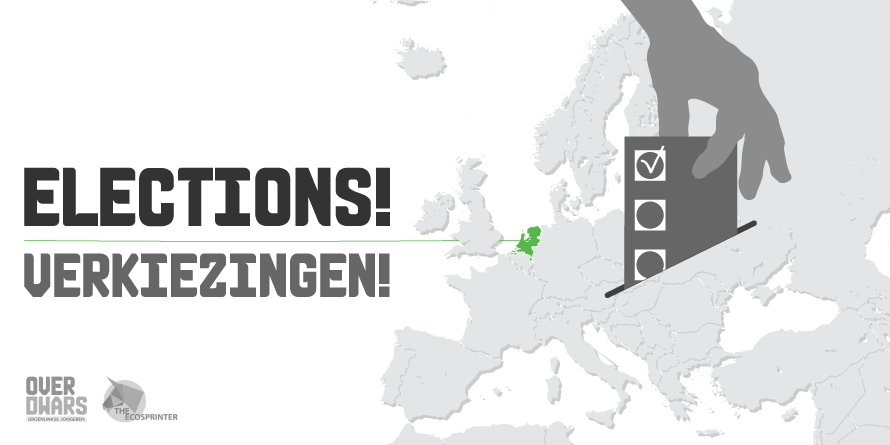 Over the past weekend, the annual General Assembly for the Dutch Green Party (‘GroenLinks’) took place in Utrecht (The Netherlands). Due to their new, immensely popular leader Jesse Klaver – as well as the general abysmal state of the world – the party has been growing for months. This causes unprecedented situations: 3000 attendees made this assembly the largest in the history of the Dutch Greens.

Quite a milestone, but also a bit of a surprise for a former modestly attended party. The assembly venue was chosen to be spacious: a former industrial hall (which turned out to be quite hard to heat) filled with thousands of chairs, spotlights and video screens. Many volunteers were needed to assist the masses – from ever smiling hostesses and cloakroom staff to vote collectors: everyone was working hard to ensure a correct and comfortable proceeding of the assembly.

This turned out to be more complicated than one might expect. What to do when an unsuspecting father pushes his stroller halfway through the building before discovering it is coated in dog poo? Are the lunches meant for the Dutch Young Greens (DWARS) also available for hungry babies? And how hard can it be to find a power outlet in this massive hall to accommodate Twitter addicts?

The sheer scale of the event also brought several other issues. More than 300 amendments had been proposed to the political platform concept, many of which had to be thoroughly discussed. DWARS was one of the heavily involved parties, suggesting the elongation of paternity leaves, introduction of income dependant fines, expansion of scholarships, acceptance of ethical hacking, and continuance of own risk clauses for health insurance.

In order to accommodate the increasing enthusiasm towards the Dutch Green Party – and protect outsiders from endless discussions about amendments – the official assembly was followed by a ‘Meetup XL’. This Obamaesque show offered enthusiasts a chance to get to know the party. A great idea, which overlooked a small issue: there was no time planned in between the assembly and the Meetup.

As was to be expected, the assembly took much longer than anticipated, which forced visitors of the Meetup to sit through party discussions on the Dublin Treaty, the NAVO, and percentages for development programs. When those were finally completed, and the final party line was accepted exuberantly, the real festivities kicked off.

Dutch comedian Guido Weijers presented the event, which started with a refugee turned rapper. This seemed like a valid attempt to involve the less politically engaged – but any rap concert becomes rapidly awkward when performed in front of a sitting audience. Campaign assistant Lotte elaborated on her experiences within the expanding party, and thanked all those involved for their commitment.

From then on, the political tone of the Meetup intensified. The immensely popular former party leader Femke Halsema received two standing ovations for her lovely and hopeful talk. A new campaign video received extremely positive reactions. And the speech given by party leader Jesse Klaver was moving, motivating and sincere. It made good all of the little uncomfortable moments and the long discussions of that day. 3000 people – what a day!

This article is part of the  OverDWARS Campaign series in collaboration with the Ecosprinter, which covers the road to the Dutch elections  of March 15, 2017.