The Minister of Social Affairs Hanna Mäntylä and researcher Ville-Veikko Pulkka answer questions about the situation of the Finnish Basic Income Experiment. The article also discusses what are the aims of the experiment, and what its success would mean for basic income.

The hype about the Finnish Basic Income experiment sometimes frustrates researchers who are working on it. The level of basic income in the experiment has been proposed to be a minimum of 600 €/month. This is a net sum (the basic income itself will not be taxable), and corresponds to current minimum benefits. Yet some news and memes online have often depicted the sum to be more – for example, 800 €.

The problem stems from the many different levels discussed by the research group headed by the research department of Kela (The Social Insurance Institution). There were a lot of options especially at an earlier stage of planning. If the resources for the study and the tax system would facilitate it, the researchers would actually prefer to try out different levels of basic income, but most probably there is only enough money to test one amount.

Further, the experiment will not tell us what kind of money we would be talking about, if there ever comes a day when basic income is actually implemented in Finland. That would be in the hands of politicians, as will finally be the sum in the experiment. The experiment only aims out to find out some – scientifically valid – information about the effects of basic income.

The information from the ministry has been somewhat scarce since a newspaper article in June (link to a Finnish language site), which claimed that the process is “running out of time”. The article also cited fears that only 1,000 long-term unemployed adults would get into the experiment – a group too small and unrepresentative. The experiment will not include youth under the age of 25 or students, nor pensioners.

According to the ministry’s officials the planning in the research project headed by Kela continues until November while the work on legislation is already in full swing. The Minister of Social Affairs and Health Hanna Mäntylä (The Finns Party, the party formerly known as the True Finns) says now that the project will go forward in a manner “which allows us to adapt to changes as needed”.

The law needed for the experiment is coming out for comments sometime in Autumn, when the parliament returns from their summer break. There is still a strong belief that the experiment will begin in January 2017, even with the rush and lots of things going forward simultaneously.

Many things have already been decided. The money currently used to pay the benefits of people in the experiment can be used to top up the budget of the experiment, allowing for a larger experiment than would otherwise be possible. The technology used to actually pay out the basic income will come from Kela. This should allow the budget to stretch for a big and diverse enough experiment.

The ministry seems inclined to follow the researchers plan. Yet, there might be mixed goals in mind between the different government parties – the agrarian Centre Party, the liberal-conservative Kokoomus and the populist Finns Party. The equal treatment clause in the Finnish constitution might also cause some problems for the implementation, since no citizen should in principle gain an unfair advantage over another in face of the law. And there might be issues with EU legislation too.

A somewhat reasonable fear has been that the politicians will come up with something other than what we are used to calling ‘universal basic income’. Some MPs such as the former parliamentary group leader of Kokoomus (the National Coalition Party), Arto Satonen, have been discussing a model that sounds more like the working tax credit in the UK or some sort of ‘activity money’, paid only to individuals accepting certain workfare policies.

What would success in the basic income experiment mean?

Not definitely that much. First of all, there is the issue of defining ‘success’. For the current government in Finland the main goal set for the experiment is employment: to succeed the experiment should increase labour participation in the group accepted to receive the basic income.

“The measures of the experiment should be crystal clear before it starts”, says Mäntylä. “First of all, we need to find the pressure points of the machinery, which create incentive problems – the situations where it’s not beneficial to take on a job.”

A researcher participating in the project, Ville-Veikko Pulkka says that even if there is virtually no change in labour force participation, the results can be positive for proponents of BI. It can alleviate fears that unconditional money makes people lazy, which he does not think has much support from earlier studies on welfare or taxation.

“Of course, if there would be like a 10 % drop in employment among the participants, it could be said to be quite problematic”, he clarifies.

While employment is the main thing to be measured, there are “softer” goals too. According to Pulkka, the much discussed argument for basic income during the Swiss referendum was technological change and increasing insecurity in the labour market:

“It’s almost the opposite, really. Others want to make possible a subsistence also outside of work or entrepreneurship, while others want to get more people to the workforce. Even though the mechanism is the same, the political framing affects whether people will vote for it or not – in a referendum, for example.”

Mäntylä stresses the importance of seeing how the automatic, less bureaucratic payments will affect the subjective well-being or health of the recipients. The information gained does not necessarily lead to an universal basic income as envisioned by its proponents. Smaller steps might be taken.

Mäntylä ponders: “How much can we dismantle? Could we maybe combine some benefits? The current social security system is extremely complex and rigid.”

Pulkka also believes that the general results might act as a basis for new kinds of discussion on developing the welfare state, a thing Mäntylä believes to be of interest everywhere in the world.

How to go forward with implementing a basic income?

The higher the basic income, the more possible it makes opting out from work. I have a fear that the hopes invested in the experiment and basic income in general tend to be too high. As Jorge Pinto’s text discussed last week, basic income is not by its nature necessarily progressive, anticapitalistic or ecologically sustainable.

Yet, I would argue that even a lower basic income has some merit. The most current level income proposed by the Greens in Finland is 560 euros a month, while the Left Alliance argues for a basic income that does not leave anybody with less income than they had before.

While both proposals would diminish income inequality through taxation, they are not “revolutionary” in any sense of the word. They are not highly different from the experiment’s approach, where – in Pulkka’s words – “nobody is to win, but nobody is to lose”. Basic income in all these aims mainly to replace the minimum income security with a more flexible, more humane and more rights-based solution.

To put this into perpective, six hundred euros is often not enough to rent out a one-bedroom city apartment in Finland. All currently discussed basic income models would still keep the current or a somewhat reformed housing benefit.

The model preferred by the experimenters – but to stress, not definitely to be used in any future “BI realized” – is a simple one. Basic income will be coupled with a flat rate tax, high enough to make the prospective model cost-neutral for the state. In the report by Kela, 600 € basic income would mean a 45 cent tax per euro earned.

According to researcher Pulkka, the flat rate tax is a common way to achieve the wanted budget neutrality: “Of course the tax could vary, but this is also an issue of what is easy to achieve with the tax authority. Most simple for the experiment would be to use the current taxation.”

A basic income, even with a flat rate tax on income, creates progression – of the effective kind. Because everybody gets a basic income, the point where one becomes a net payer differs by the tax rate and amount of basic income. People “pay back” the basic income in their taxes when they earn more.

BI does not ensure more income parity or less poverty. That is a struggle in itself. And there might be pragmatic reasons to disentangle it from the question of how social benefits should be dealt out – the old way or as an universal basic income. 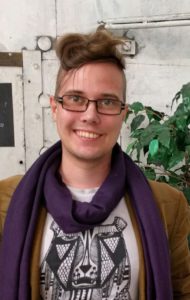 Simo Raittila is a 27-year-old Finnish research assistant, M.Soc.Sci, and a member of the growing digital precariat. This year he has, for example, joined the Ecosprinter Editorial Board and been part of the team that won shared first place in SITRA fund’s Basic Income Hackathon with an idea developing a housing allowance to fit the basic income model in the Finnish experiment.