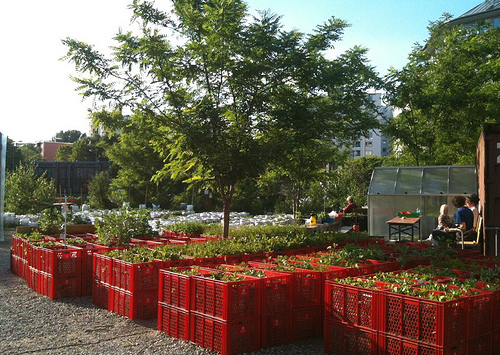 Common-property and open-access resources have repeatedly been portrayed as the centerpiece of a Tragedy of the commons. Those resources – such as a forest or a fishery – would tend irremediably to be overused as homo œconomicus users aim to maximize their individual benefit and lead to the depletion of such resources. To answer this Tragedy, we used to think there were only two ways: governmental regulation or privatization. Wrong. The reality (and science) showed that often self-organized institutions are not only more efficient, but also more equitable and sustainable.

When the markets take over the states

The metaphor of the Tragedy of the commons has been widely used to justify the need for imposing governmental regulation on environmental resources, or, alternatively, to justify the privatization of shared resources; those two options being systematically presented as the two only possible solutions to organize the sustainable use of resources.

But, since the 1980s, with the decline of the state as a regulator and the ever expansion of markets, it is the privatization of natural resources that has been increasingly used to “preserve” the environment. The privatization of climate protection through the establishment of markets where carbon emission permits can be traded is just one – yet significant – example of such privatization of the environment. “Proof” of the extraordinary efficiency of the climate market is the fact that carbon emissions’ rights are now worth rubbish.

The science and the governance of the commons

In 2009, Elinor Ostrom , a political scientist, was awarded the Nobel Prize in Economics for her contribution to the analysis of the governance of the commons. As early as the 1990s, she vigorously criticized the Tragedy of the Commons conclusions. Over the three preceding decades she had indeed led empirical efforts to document hundreds of cases where local users had actually self-organized to collectively successfully regulate the use of common resources. Following the same scientific approach she destroyed Mancur Olson’s theory according to which regulatory approaches would be doomed to inefficiency because of free-riders systematically cheating on rules. That theory, though, is still the basis of most pro-privatization arguments. For Ostrom the Tragedy and the free-riders’ effect are models only limited to very specific sets of conditions and do not apply in most cases; those models should not be used to inform policy-making.

In her study of the commons, Ostrom insisted on the outcomes of governance processes. While efficiency is the basis of the argument in favour of systematic privatization of public resources and services, she looked at two additional variables: equity and sustainability. Looking at those three outcomes of governance processes, she has shown that in most cases, self-organized forms of collective action actually perform better than governments or markets.

The theoretical depth of Elinor Ostrom’s work has an incredible value because it is based on a huge empirical work that has involved scores of researchers across the world. When it comes to determining how local resources should be allocated, the best of the science tells us that there is no ‘only way’, neither systematic privatization nor top-down governmental regulation which often destroy pre-existing local rules and norms.

The systematic privatization of local services advocated by the European Commission is mostly ideological. There is no scientific consensus to justify it. Many examples have shown that privatizing local resources (such as water provisions and sanitation) pose a threat to delivering basic services to all citizens in an equitable and sustainable way.

Technology can turn public goods into commons; and not for the better

Another key contribution from Ostrom is the way she distinguished public from common goods. While both types of goods share the characteristic that restricting people from accessing them is costly, only common goods are subject to exhaustion. Thus, for long the climate system has been a public good and breathing fresh air would not exhaust the atmosphere. The development of the use of fossil fuel enabled humans to change earth’s climate, turning a public good into a common good that we seem unable to manage collectively.  It is technological improvement that turns public good into common goods creating new social dilemmas that we struggle to solve. Think of deep sea fish! It used to be inaccessible; it’s now served for lunch in schools.

Commons are not only vulnerable to exhaustion; they are often subject to enclosure. Creating property rights for a good which was commonly owned locally (a forest, a lake, etc.) often leads to sub-optimal (another word for unfair) restrictions in the use of that good: “no trespassing” rules for instance.

The issue is that allocating property rights to private owners as a systematic response to manage resources sustainably limits the types of arrangements available to fit particular challenges. At a time when we struggle to redefine our welfare and development model, imposing systematic privatization of our resources and public services is a collective suicide. It means that we would deliberately amputate ourselves from the possibility of finding new collective arrangements other than markets ones. It equals to putting to the trash an immense potential of social innovation that do not rely solely on markets or classic policy principles. And such innovations are mushrooming: social enterprises, local farmers’ food cooperatives or energy cooperatives, communal and shared housing, or  transnational movements like Transition Towns, [add more as it comes].

Internet: a new battlefield for the commons

Significantly, the development of the internet has been largely driven by non-market actors and is today the scene for an explosion of creativity. Think of the Creative Commons! This license has been created by and for creative people who wanted to keep authorship of their ideas, but also wanted to share them so they can be reused and remixed. This is made possible by the extreme freedom that you can still find on the internet. But a free and open internet is no public good. Like the lake where you like to have a dip in a warm summer it’s a common good that is always vulnerable to some pig who will spoil it or enclose it.

Liberals might be right to say that innovation and progress come from open societies and economies. Neoliberals though have made the mistake to consider that the systematic privatization of everything equals a free economy; in many cases privatization leads to unequity and alienation. Not having access to clean and affordable water and sanitation is nothing but alienation. Similarly, not having access to a free internet today can seriously undermine your capacity to act as a citizen.

Thinking beyond markets and states does not exclude any of the two, it means giving space for any other way that groups of people can find to resolve collective dilemmas. Ecological activism has much to win in further embodying such thinking, as it bridges discourses emphasizing the autonomy of individuals and groups, the protection of biodiversity and resources, and the promotion of a fair and open society.