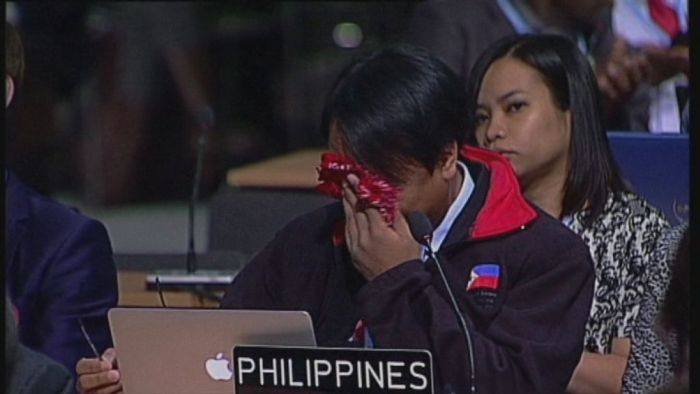 It is the third time I have cried at the COP. The first time was because of Yeb Sano’s speech* about his 10,000 brothers and sisters killed in the typhoon. The second time was when he came to shake my hand and a youngo friend’s hand after she delivered a speech on loss and damage expressing solidarity with the Global South in front of all the parties**. And there is today.

Today, the UKYCC kindly invited me, Healthy Planet, CliMates, and Foundation for the Rights of Future Generations representatives to a meeting with the UK’s Minister on Energy and Climate Change Greg Barker and the UK’s lead negotiator. Well let me tell you that in my whole life, I have never been served so much bulls**t in such a short period of time. We were told lies after lies after lies. We were told that the UK gas industry wasn’t receiving any subsidies. We were told that the UK was taxing fossil fuels heavily. We were also repetitively told that the UK was showing the example and leading the world in the fight against climate change. Apparently, the UK is leading by getting the world to move from coal to gas, by keeping some cards in hand and not going for the emission reductions we can make but for the reductions other countries make, by providing insurance to people who won’t even have countries to live in in the next few years. We were also told that the UK is playing a very tough negotiating game. A game.

That’s what they are doing – playing with the lives of the many people around the globe whose lives are everyday at risk of extreme weather events or so called ‘slow-onset events’ as well as the lives of the youth everywhere, not to mention the children not even born yet. We weren’t invited to this meeting to give them the views of the youth, we were invited to be served false data, weak excuses and not to have our questions answered. How do we expect to solve this crisis when our governments tell us lies? How can we make progress in this hard and complex global crisis when our position is so weak? How can we defend our futures and the lives of many displaced people around the world?

We need to get angry. There is no other way. To make progress in the international negotiations, we have to push each of our governments to act domestically. This has been made cleared to us many times since we have started this COP. We are doing as much as we can here to have an impact but it won’t be enough. We can’t let our governments tell us lies. We have to call them on it. And we have to put pressure everywhere we can and especially where it hurts. So many people are dying everyday because of our inaction and because we are ready to trust our governments to do the right thing. This is not enough anymore.

We need to each look at ourselves (me the first) and decide how we want our lives to have an impact, whether we want to let people die because of our apathy or whether we want to lead the fight of our generation and lead the world towards a collaborative effort preserving humankind and our environment because I tell you what: both are worth preserving.

It is the third time I have cried at the COP. So far.