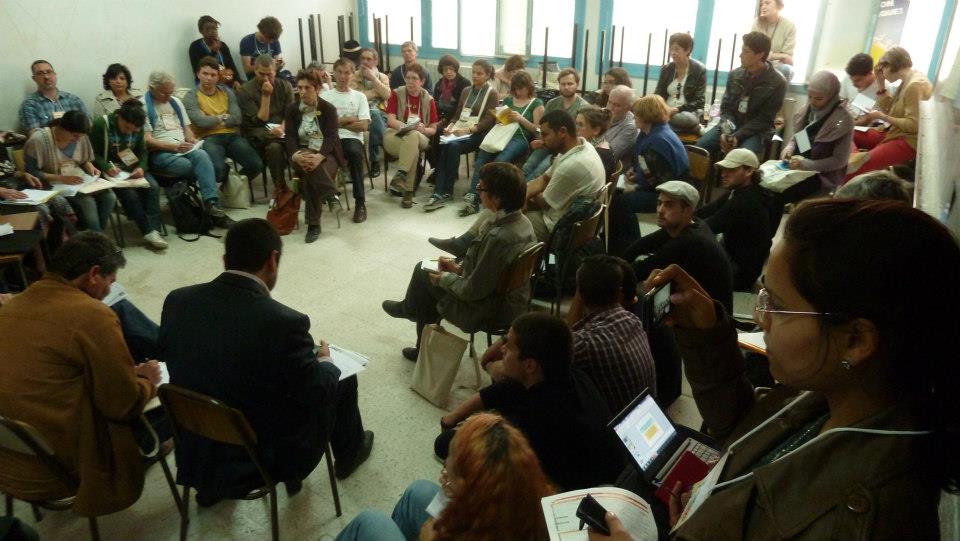 The first World Social Forum took place in 2001, in Porto Alegre, Brazil. In 2013, it was the first one held in an Arab country , Tunisia, from 26 till 30th March .The theme of this year was ‘dignity’, inspired by the 2011 Tunisian revolution where the Arab spring started. Classified as the biggest annual alter-globalization protest movements gathering, tens of thousands of activists from all around the world fighting for various causes and struggles gathered in Tunis to struggle for social and global justice, for a global sustainable future. Many talks, exchanges, workshops, conferences, actions, activities and revolutionary events have been held, and everybody was there! The campus had become a small global social world.

Many battles and social movements against corruption, exploitation, injustice, capitalism, imperialism and neo-liberal systems occupied Headlines but the most important were youth participation, as well as women rights and feminist movements all around the world. Other issues have been discussed intensively, such as: Economic issues (debt crisis, financial system, capitalist economy etc.), Human rights causes (minorities rights such as Amazigh people ), new Medias, issues related to exploited lands (especially in Africa), colonized lands (Sahrawi people, Palestine). Environment was not in rest, with great debates over the Environmental crisis, global climate justice, energy revolution, ecological policies and all issues related (Food sovereignty, free exchange, false climate solutions and green economy …). However, despite the importance of all those battles, still the most covered both by participants and the medias were conferences and workshops about Islamism, Democracy and Women’s rights in revolutionary Change and Political Transition contexts. It is important to mention that it was the first time ever that a permanent space was dediated to Climate and all issues related, in line with the convergence of Climate current challenges and nowadays’ social movements.

And indeed, the Climate Space was a fixed space within the World Social Forum to discuss the causes, impacts, struggles, alternatives and strategies to address climate change. It was a venue with various workshops, debates and strategy sessions. Worldwide climate movements discussed, shared, and tried to have a common strategy to fight climate change, and they ended up their activities by a convergence assembly.

The link below shows you the climate space (http://climatespace2013.wordpress.com/events/) . And indeed, many other conferences and workshops covered all climate issues like energy revolution and the environmental crisis :

Environmental crisis: which strategies? Which alternatives?

Alternative movements and their partners ( within the student and workers unions) organized a workshop on the roleof the Social Forum regarding the convergence ofstruggles to fight environmental crisis (Canadian experience: Canadian social forum).

Panelists gave different lectures from different points of view, to battle environmental crisis in Canada and the importance of peoples movements (especially student movements). Indeed, the collaboration of various unions, environmental NGOs and networks, with the people movement was a successful and effective gathering , as it was the case in some recent mobilizations against neoliberal austerity policies especially during the spring in Quebec.

In fact, while the environmental crisis is only getting worse and the negotiations under the international umbrella of the UN paralyzed, it becomes increasingly evident that only a strategy of popular mobilization will lead us out of the current crisis and avoid the worst previsions

Since large resource mining affect the physical environment and can have strong social and cultural repercussions on local communities, especially on indigenous populations, the challenge right now is how to pursue these collaborations, extended to citizens mobilizations against oil exploitation and shale gases, both in Canada and worldwide exploited territories by Canadian miners(Latin America, Africa, and some European countries such as Greece and Romania) ? What are the agreements we can get (alliances forged ) with indigenous communities strongly involved in the resistance to oil and mining extraction?

Panelists, inspired by Arab spring and occupy movements, called for an international people’s movement to resist the environmental crisis through actions against mining extraction, oil exploitation, and shale gases. Furthermore, the repercussions of the environmental crisis on local communities need a strong people’s movement for social and global justice toward these communities. Besides, present in the workshop, they delt with related economical issues, denounced neoliberal capitalism and addressed alternatives to fight the current economic system.

Energy transition: towards a new model of development?”

As part of the “Energetic revolution” campaign, initiated by the French Young Greens (http://www.jeunes-ecologistes.org/revolution-energetique ) , they also organized a workshop on “Energy transition: towards a new model of development?” with ATTAC, and other partners.

This workshop was an opportunity for French green youth to explain the challenges of energy transition as a vector of economic development, based on decentralization and relocation, democratization and citizens’ initiative, job creation, transparency, simplicity and a new vision of land and natural resources.

So far, an ecological and social energy revolution, based on renewable energy will be for the benefit of the people and the planet, not mentionning its benefits in a transition context. (In addition, will be the best solution in transition period.)

While French young greens defended the necessity of an energetic revolution, Germans went already through several successful energy transition steps until now to insure the energetic revolution for a friendly-climate energy policy as the use of renewable energies protects the climate and the environment.

« Which kind of energy supply does a developing democracy need? »

During this workshop, co-organized by the Greens/EFA Group in the European Parliament and the Tunis Office of the Heinrich Boll Foundation, speakers dealt with the linkage between democracy and energy.

TheSwiss National Councilor,Mr Christian Van singer, gave as a speech about “green energy policy”. Mr Van singer showed the Schwitzerland case, with 76% of total energy being non-renewable, heating consuming 45% and transportation 35%. Therefore, a green energy policy is still to be achieved, with for example solar energy and geothermal.

Then, Mr Sven Giegold, Member of the European Parliament, from Germany, offered a lecture about the German experience toward renewable energies, the “energy change”, so called “energiewende”.

Mr Sven showed that the increased use of renewable energies is not only appropriate from an environmental perspective; it also has macroeconomic benefits regarding energy prices and importations. In fact, in light of rising global energy demand, rising energy prices are likely to happen. It is important, that such energy prices remain fair. Therefore, energetic transition became throughout the debates a realistic solution to secure economy as well as environment and climate issues.

He talked about the democratization in the use of renewables in Germany, in an equitable and fair way between regions, the ones running now renewable energies are small and medium size companies, private and individuals. He explained that this democratization in the product of energy is a good thing, as advantages are then shared quite equally across all the regions in Germany: ( Energiewende&quot: http://www.greens-efa.eu/fr/the-quotenergiewende-quot-9538.html ).

Germany gets more electricity from renewable sources than any other big country (see picture below) and they aim this share of renewable energies in total electricity consumption to increase to at least 35% by 2020. 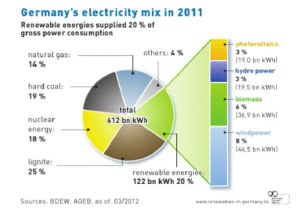 Participants took benefit from the MEPs presence to ask questions about local governance concepts regarding the German experience, and the answer focused on the benefits those local communities, in participating to the energy projects in their area, can get (jobs, infrastructure, energy supply and prices…) // (the answer those local communities participate and benefits from energy projects established in their area (jobs, infrastructure, energy …). )

Another question was raised regarding the DESERTEC project. Tunisian environmental and Human Rights activists demonstrated their reserves regarding this project: in fact, gathering critics and questions, practically no benefits were found out of the DESERTEC project.. Moreover, many participants (they) asked for clarification on their questions and feared not to have them (that does not always have good answers to them): Where will the energy produced here be used? Where will the water come from that will cool the solar power plants? Moreover, what will the local communities and host countries get from it?

They denounced the unclear concept and lack of transparency regarding the DESERTEC project and they added that after the Arab Spring, all activists would fight (we want to act ) upon the demands for social justice and codetermination, incorporate civil society. In this process, the European Union has to act like a partner.

Green MEPs explained the green view and how, as greens, they support win-win partnerships. Panelist from the ATTEM association (Tunisian Association for the Transparency in Mines & Energy), presented the challenges regarding transparency in Mines and energy after the revolution , especially issues related to social justice and economic growth .

Mrs Diana Kaissay, director of the MENA Region antena of ‘publish what you paid’, talked about energy and mines governance in the MENA region. Soumaya Dutta, from Vasudhaiva Kutumbakam Indian network, focused on energy democracy and climate change issue.