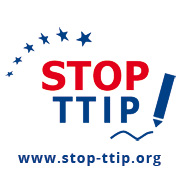 So what is TTIP? The Transatlantic Trade and Investment Partnership. A bit of a mouthful, I know. But these terms and acronyms are supposed to be hard to remember, let alone to understand. In fact, none of us were ever really supposed to know about TTIP at all.

The basic premise is to establish a bi-lateral trade agreement between the EU and the US which reduces ‘barriers of trade’. Namely the NHS, environmental safeguards, workers’ rights, affordable AIDS drugs, food safety, animal protection, data protection and our democratic rights all come under this category. Put simply, if any of the above threaten multinational corporation’s ‘rights to profit’, they are entitled to take any public bodies, governments included, to secret private courts where they can be sued infinitely. The infamous proposed secretive courts, Investor-State Dispute Settlement (ISDS), would allow multinational corporations to bypass European courts in order to dismantle public authorities’ ability to safeguard our civil rights.

Sounds a little fishy? MPs present in the TTIP negotiations are sworn to secrecy. While our right to freedom of information has already been denied as negotiations continue undemocratically, Cameron’s attempts to portray TTIP as a beneficial agreement are, quite frankly insulting to our collective intelligence. Mr Cameron, Obama, and all the world leaders that have encouraged TTIP: If TTIP has nothing to hide, then publicize the documents. The European Union and the USA pride ourselves as democratic nations, so give us the right to vote on TTIP that we deserve.

There is already evidence of the danger this poses to our principles of democracy internationally, where trade deals similar to TTIP have already been enforced.

No, the illegal enforcement of the Trojan horse of TTIP is not a sick joke, or a plot for a dystopian novel. This is the neo-liberal reality in which we live in. And if we don’t exercise our democratic right to protest against it, we may lose our democracy entirely. Whoever you will vote for in May, whether that be UKIP or the Green Party, this concerns everyone. For if we sell ourselves to TTIP, then what does it matter who we vote for? Therefore in our next elections, please recognize the stance of parties who aim to safeguard our democracy such as the UK Green Party, whose leader Natalie Bennet has called TTIP “A huge threat to our democracy and sovereignty”. If TTIP is legislated, the corporations, not the government will call the shots. And we could not vote them out if we tried. What we are looking at is a potentially irreversible change in the way that our world is run, where multinational corporations ‘right to profit’ is being valued over our right to democracy, and the freedom of the market is prioritized over the freedom of society.

However it is important not to feel demoralized or powerless by these negotiations. We need only to look to the past to remind ourselves of the power of protest. In 2005 when the Bush administration attempted to implement the FTAA (Free Trade Area of the Americas) – a deal almost identical to TTIP, Southern and Central America stood together to reject the proposition. Similarly, in 1998 the Multilateral Agreement on Investment was powerfully brought down by a global alliance of activists in what proved to be the first example of mass activism deploying the Internet.

There is absolutely no reason why we should not take inspiration from the past by taking our future into our own hands. Although they have remained largely undercover for the last two years of secret negotiations, there is increasing awareness amongst the public, and citizens are making their voices heard: we do not want TTIP.

So please, consider this a call to action. Protest, lobby your MEPs, support organizations such as Corporate Europe Observatory who work to push leak more TTIP documents via Freedom of information. But most importantly keep talking, reading and writing about TTIP. I am no expert in politics, I am merely a concerned young person who has used the internet learn about TTIP, and spread awareness of its dangers. And you can do this too. As 1998 proved, the internet is a valuable democratic weapon has the potential to empower us. We have a right to democracy, let’s keep it safe.

Young Greens of England and Wales