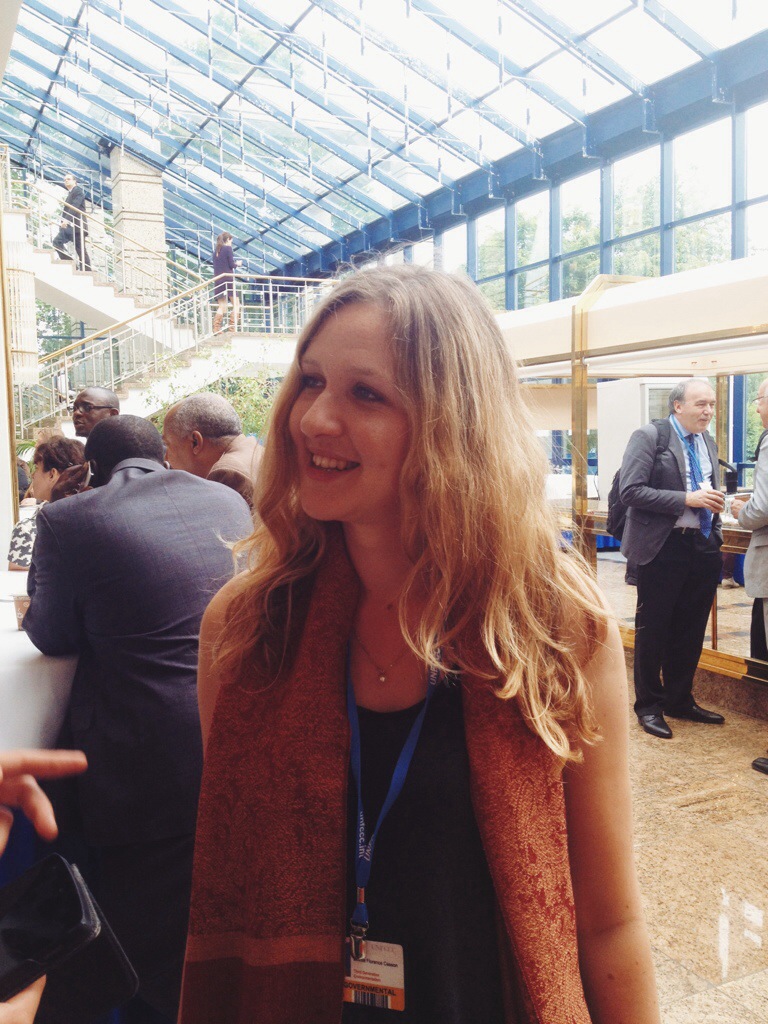 Today we spoke with Louisa, who is a UNFCCC veteran and asks young people not give up hope on them so fast – read why here.

Why are you here?
I am here because I think Bonn is a really exciting place for young people and for European civil society to come together. Having key moments on the international calendar are useful to get local efforts working on having mobilization efforts. I’ve been twice before, and I really think it strengthens the European climate movements, by recognizing that within Europe we occupy a privileged space and we need to engage with international issues, to bring a broader perspective and enrich to local, national, regional campaigns.

We also bring in urgency and we have a very powerful message as the youth contingency by saying we are going to be the ones affected by climate change: the decisions you make will affect us for our entire lives. Especially when there’s so many groups here vying for attention, it’s so important to have that urgency which young people can really deliver. Also very important decisions are made here, so civil society needs to be here if we expect to have some kind of democratically legitimate global agreement. I am very keen to work on our levels of representation here, making sure that our participation continues to improve instead of being eroded away.

What is the most important issue for you here?
For me, looking at the politics between different countries and getting a sense of what their national contributions will be for the global deal. The opportunity to have ministerials- that’s the first time it’s happened here. It’s going to help have high level buy in, and not just red lines made at home, it’s really a chance to have more breakthrough. To me it’s very telling that not many ministers came, especially from the EU. For me the absence of the UK minister, is very appalling- actions speak louder than words in the UK’s commitment to tackle climate change. They say that they didn’t realize it was a ministerial, which is concerning as well. This also shows where youth led the charge. Our push to call it to attention got good media attention- it made it into the BBC, which gave it a lot more pressure. We have since heard that the government noticed and perturbed by it. But we want to work with them to make sure they are a better force.

Another aspect is the capacity building for the youth climate movement. I think youth empowerment comes from taking action: if we do lot of actions, we are playful, it’s an incredible learning experience about engaging with climate politics. You are really learning by doing which is hugely important issue. Especially as it is a difficult space to come back home and reconcile all of the issues you became aware of here. It’s also a place to come together and bring in different cultural perspectives but not just through discussing it but my doing things as well.

What is the most important thing for young people at home to know?
Understand that there is sense that countries want to be moving forward, even though there a lot of sticky issues about what that really means. It’s a huge thing to decarbonize global economy, a lot of fights that could bubble up, that could be frustrating. These are important discussions & lots of things that could be brought down to acronyms, but there is a bigger picture – and it is important for us to focus on how we can put national pressure on governments, to speed up the discussions here. Some signs of real hope is this talk over phase out of carbon phaseout- net zero. This is being covered in side events, a youth action, ministerial interventions (speeches), which is really exciting, and all from a range of different countries.

We need to see carbon as something we cannot tolerate in society. We want zero of it. We know this doesn’t happen overnight, but we need to push for this as the goal. We need to engage so many more people, involving cities, seeing how that links in, with much more concrete actions on the ground.

Final words?
What’s really interesting, with the UN it’s easy to become disilliusioned with it, especially as a youth activist. But the UN is a sum of it parts and reflects national climate politics. The Warsaw walk out and now the walk back in here in Bonn has helped us consider how our diverse climate movement can stand in solidarity, and how we can learn from each other’s national struggles, and bring that to stand together here. This is so important, as we see climate change as an issue of international injustice – the areas of the world with least historical emissions will suffer the worst climate impacts. With the Volveremos movement, we have the opportunity to connect our national movement building initiatives and ‘do our homework’ – this gives us credibility when telling countries to do the same and bring their national contributions to the 2015 deal.