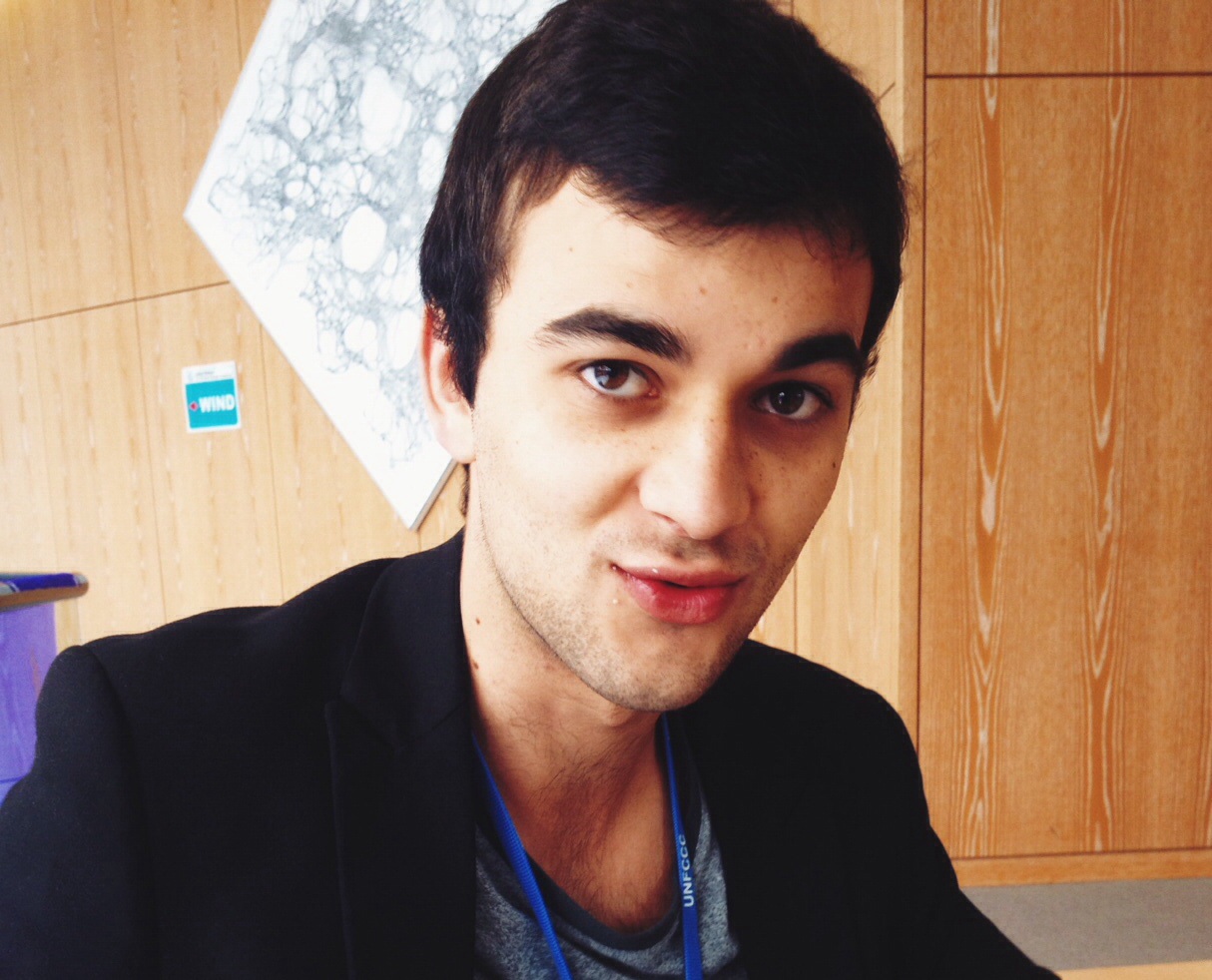 Today we spoke with Clement, who follows the negotiations for his internship. Yes- young people are even involved in the bureaucracy of these negotiations! Read his predictions for the near future of the negotiations and how climate change isn’t just about saving the planet, but our economic system as well.

Clement, Intern at the French Ministry of Ecology, Sustainable Development and Energy, CliMates

Why are you here?
I’m here for two things, first for YOUNGO, the youth consistency in the UNFCCC- especially representing CliMates, which is an international student network on climate change. We have a few research projects on negotiations, specifically our action project is “COP in My City” which is a simulation project of the COP for students, to train them and teach them the climate negotiation issues.

The second reason is because I do an internship for Ministry of Ecology, Sustainable Development, and Energy of France as a part of the UN Youth Delegation which is working on the climate negotiations. My work consists of the reflections on the future 2015 agreement, especially the work stream 2 and how pre-2020 ambitions can advance work stream 1. How the pre-2020 ambitions will make a better final agreement.

Considering the pre-2020 ambitions we will not be able to provide any kind of binding treaty because of the short time we’ve got for the next years. Even if we are signing something for the pre-2020 ambitions, we need a few years to ratify this kind of agreement, so it’s impossible. The only solution is to share expertise and experiences concerning mitigation. Basically pre-2020 ambitions will focus on mitigation which is why they implemented in Warsaw- the technical and expertise meetings on four topics: energy efficiencies, renewable energy, urban environment, and land use. The goal of this is to share experiences and even if in the future they are not able to reach an agreement on it, at least there is a platform of expertise to share with other countries of tools to make short term mitigation actions.

What is the most important issue for you here?
ADP. It’s very interesting how the negotiations are evolving especially in this intercessional.
2015 will be focused on the work stream 1, to conclude the final agreement and the contributions of countries so we will not have enough time to be very involved with work stream 2. The only way to provide good introduction on the work stream 2 will be for the COP20 in 2014. If there is nothing concrete concerning the work stream 2, after the COP20 it will be very difficult to have something on it.

The second commitment period of the Kyoto Protocol has been signed by 10 countries, and the only western country is Norway. China ratified it 2 months ago (approximately) because no one wants to sign the amendment except the technical and experience sharing. I don’t know if we will be able to provide any kind of treaty or agreement or even any informal compromise on it.

It will be very interesting to see how the compromise will be reached because everyone seems to have an agreement. How the binding aspects will be implemented, what will be the sanctions for non-respect of the treaty etc. The format will be very interesting, to see how it will constructed. I expect something which will be flexible enough to be completed year by year after the 2015 agreement. I am not sure if we will have something very binding by 2015 as no one is talking about the binding judicial aspects of it, so we’ll see. I’m not able to say if I’m optimist or pessimist… we’ll see. It depends on everyone.

What is the most important thing for young people at home to know?
In my opinion, it’s a very spiritual issue. We have this chance to live, so I don’t know who we are to counteract the future generations to live in good conditions and give them more work on the very long term issues. The entire human species is in danger, it’s the biggest challenge ever on which humanity has to face. Only for this we have to work on it any view, on the local aspect, regional, international, only by communication or by political issues or by changing your way of consuming, living.

So it’s not only about climate issues but also about our economic system which is in danger for the past few years because of capitalist excesses. Basically if you save the climate, you save the economic system. It’s a global challenge which concerns everything that has a link to our daily life. So its not just a message only for the young, but for everyone, especially the oldest generation who never heard about it because they’re too old. Mobilize, share knowledge, study and then be politicians!

How would you explain what you doing here to your grandmother?
Well, that I am going to the UN climate negotiation talks. There are only two things you can do there. You are either negotiating or you are following. And since I am not negotiating, I am following.