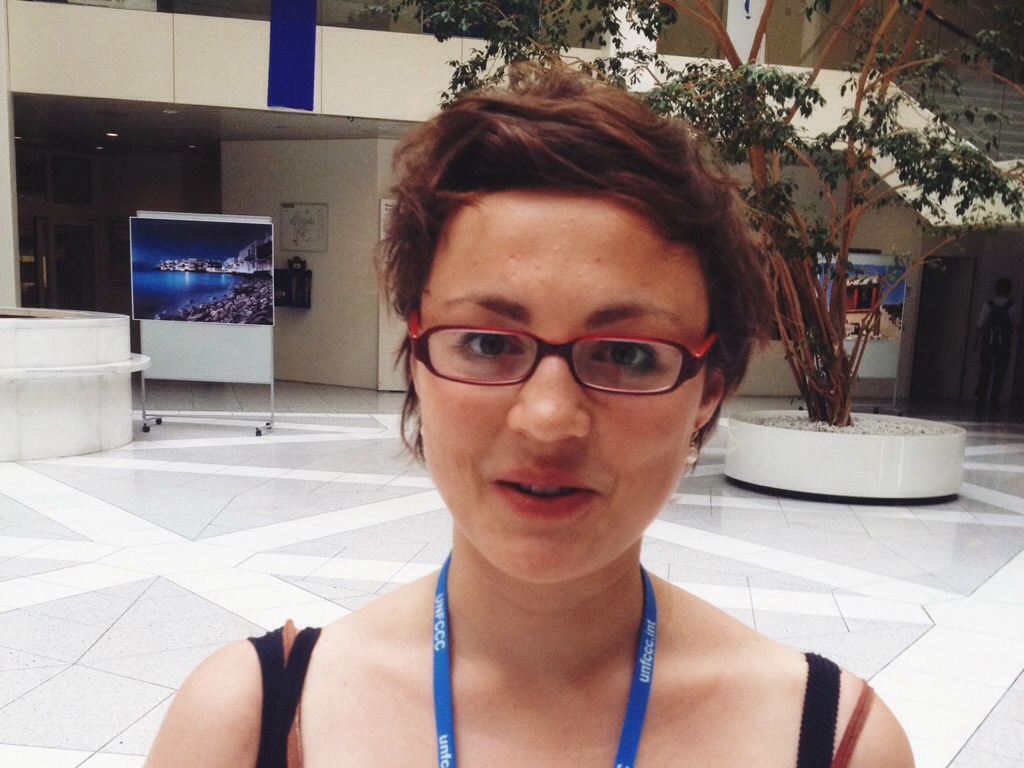 Undine is new to the UNFCCC process but just like many of us here, is taking it all in and understanding it piece by piece. Although she claims only to be a ‘learner’ in this process, we see her inputs and enthusiasm as being crucial to the youth representation in this process.

Why are you here?
I’m at the intercessional because its a quite unique perspective on transnational climate politics. While I firmly believe in local action and civil society action, it is really important to know what is happening on other levels.

Certainly to be more informed, I really came here as a learner. But also to be able to really criticize more concretely. It makes sense to join a certain event or setting, whether it be through an internship or through participation in something, in order to understand better what you are critical of.

What if the most important issue for you here?
As in what is at stake? What I have been observing is a very important development, or maybe just an important realization for myself, is that interests here are aligned differently in different fields of politics. In the field of climate politics, these alignments to a degree are quite unified. That’s been quite impressive for me that some certain groups of state, but also within civil society in particular is that those people are relatively united.

Those who want informed climate action are united simply because it’s so obvious what needs to be done, something that has been the most important realization while being here. Within those who fight for climate justice, they’re not pulling in different directions, in particular across the equator between the global north and global south. That’s a really important message, that climate change has an incredible destructive reality, destructive potential but there’s a certain unifying force in the struggle against it. The majority of people in world, and actually the majority states, not necessarily the biggest chunk of power or money, but certainly in terms of people.

What is the most important thing for young people at home to know?
The message I would communicate to the people that are a little interested or aren’t interested at all about climate negotiations, is that even if the negotiations don’t receive the most media attention, they are quite important.

They are amongst the important, particularly if you are young and you want to live past 2050, which I do. The decisions being made here, aren’t the only decisions that will determine the scope of climate change and they are certainly not happening in a space that is outside of local actions or national campaigns, but they are still incredibly important. In the long term, they are significantly more important than things that are done at other UN institutions that receive considerable more media attention.

Although other developments of willing states cooperating or civil society organizing itself globally, are worth our attention as well, but this is still the main institution that currently has significant potential to limit the degree of climate change. Although it’s incredibly complex and I do not understand everything thats going on, it’s still possible to have an opinion and make simple and clear demands.

How would you explain what you doing here to your grandmother?
In fact I spoke with her yesterday. The most difficult part was to keep the attention span. In very simple terms, I explained what the UNFCCC is. That it’s different states coming together, with different motivations but at least united in doing something, (or at least pretending to do something!). There are other actors involved, non state actors that have been increasingly included into negotiations- such as people like me.

So she asked me what we were doing and I said different people are doing different things. Some people are really working more on the negotiation level, go to different meetings, bringing different points, bringing certain terms, idea, demands into the negotiations. While others, work more on a less concrete, but potentially if not more powerful but equally level of doing actions, but communicating to negotiators and the media that people are interested and watching. Third important part, that really a lot of young people are learning here- not just for ourselves but that our knowledge compels us to do certain things and to act upon it.