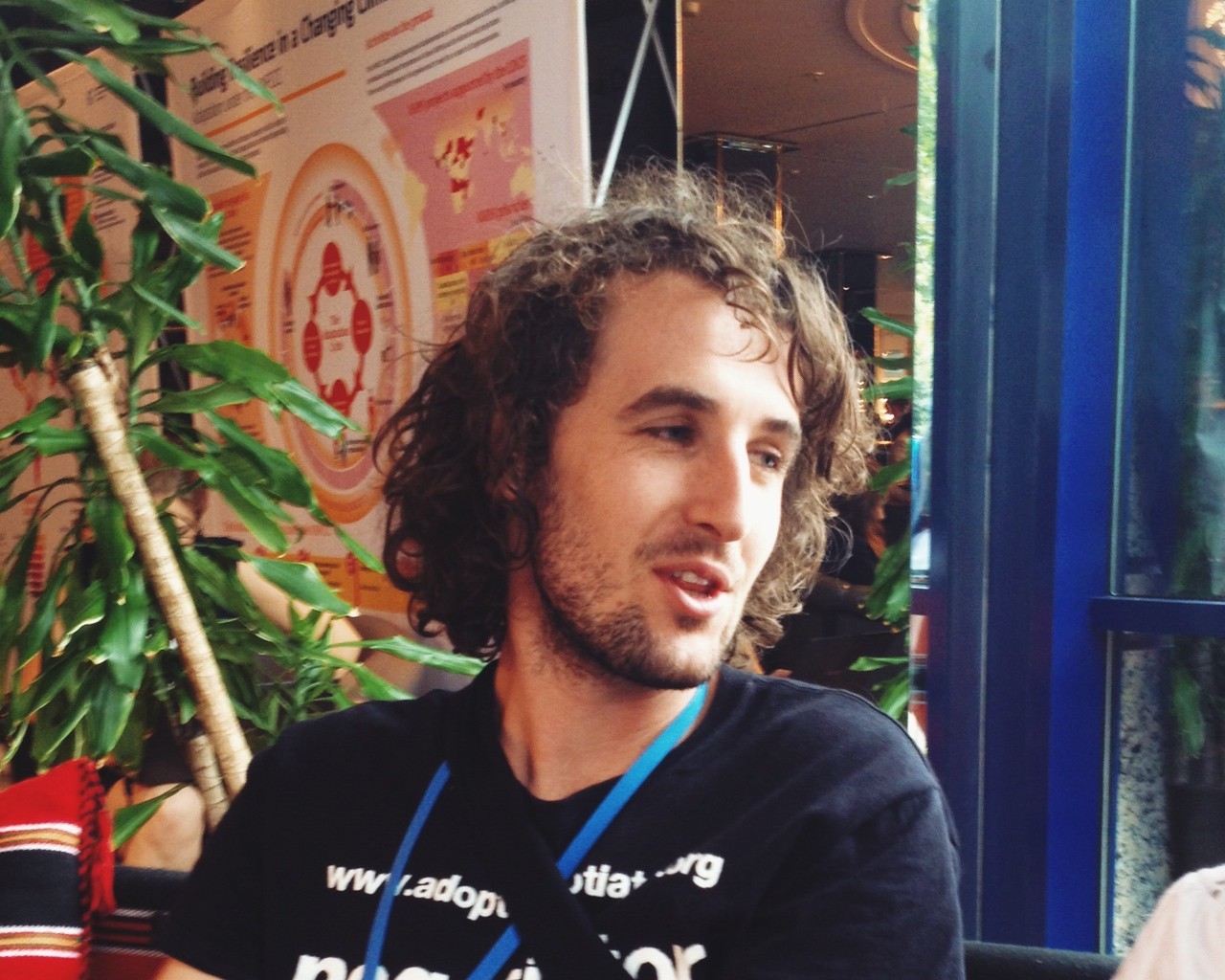 The Ecosprinter was happy to talk to Chris who is another member of the climate change media. Chris works on the project Adopt a Negotiator– a one stop shop for all climate talk info, which can be a lifesaver for many of us here at the negotiations. Voices like his are a powerful advocate for youth participation in this process around the world and clearly explain why we need to be here- even through his Australian accent.

Why are you here?
I am here to work with the Adopt a Negotiator project that brings young people, activists from around the world, to climate conferences to build their own understanding of the COP and the UNFCCC process. But also to use their experience with the rest of their countries, with young people and the media and shaping the narrative of the way people report on the UNFCCC and on global climate change in general.

What’s the most important issue for you here?
Within the talks, as an Australian, is the absolute lack of leadership from developed countries, this is highlighted in all areas of the negotiation. Whether it’s finance, mitigation, tech transfer, capacity building, even on REDD, safeguards and things like that. I feel like that on ambition, Australia is not doing enough, in general developed nations not doing not near enough. On finance, Australia has decided to cancel its pledges to the GCF and a number of other countries have done the same or have not been able to submit the right amount of finance that they need to do. Its just this shocking repetitive nightmare that I end up go through every time I come to one of these conferences.

Maybe on some of the smaller technical details we can see some progress on the topics in general. It’s this horrible fact that developed countries, with Australia almost being a perfect of example, have so much economic growth and the potential to combat climate change AND one of the biggest global footprints in the world but no climate ambition to match it. Or no ambition to support other countries like Norway, Finland or the EU in general, have shown. I feel like if the EU got more support it would show even more so.

What is the most important thing for young people at home to know?
In Australia we have a highly polarized political system right now, where our current prime minister has been able to inspire the idea that Australia was at some point doing far more than it should be doing to combat climate change. As a result the Australian people should not have to suffer the high electricity prices, and general life cost increases that a carbon tax supposedly would’ve given them. He’s torn apart most environmental regulation and support in Australia including renewable energy targets, climate commissions, the environmental defender’s offices even. The most important narrative for Australians at home to realize is that the rest of the world is sitting here waiting for us. This is not just a passive global population that is complaining about something that is not important, it’s an active global population that is going through the impacts of climate change everyday and is horrified by the future that we are not doing anything to support. We are literally leaving the world high and dry while we sip on that last glass of wine before the party is over. It’s a form of geopolitical isolationism that is not only not winning us any friends but scares the hell out of me.

Young people need to hear that the rest of the world is going through horrible climate impacts. That we as Australia are going through record heat waves, bush fires, tropical storms that are not supposed to be occurring in the places they do, the times they do, at the intensity that they are. We need to start connecting that fact that will all of this is going on we need to do more not only with ourselves but in supporting other countries and helping them deal with the impacts of climate change. We have great scientists, great technology, great economic growth in Australia as a result of our mining. While we need to rapidly cut back on our mining industry, if not gut the whole thing, we need to start supporting other countries with the skills that we have in a manner that supports our so called “national interests,” but the national interests of countries trying to adapt to climate change. We need to start doing this in an atmosphere of sharing and cooperation in a future climate scenario where by we are going need a lot of support from other countries as well. We live in a globalized food system, globalized trade system, globalized economy. We can’t just sit by a think all the Aussies will be fine while we let everyone deal with their shit.

How would you explain what you doing here to your grandmother?
When I did get to explain it to my late grandfather, I said I was doing my best to trying to understand the global negotiations on climate change and doing my best to try to get Australia’s negotiators, as well as negotiators from other countries, to take greater action both to mitigate and adapt to climate change. I believe that while the international scene and is not the only and possibly not the most important locale of climate action, it’s a critical one that we cannot ignore. So this is my little way of supporting efforts at home in Australia, back home in Malaysia, and support efforts around the world.