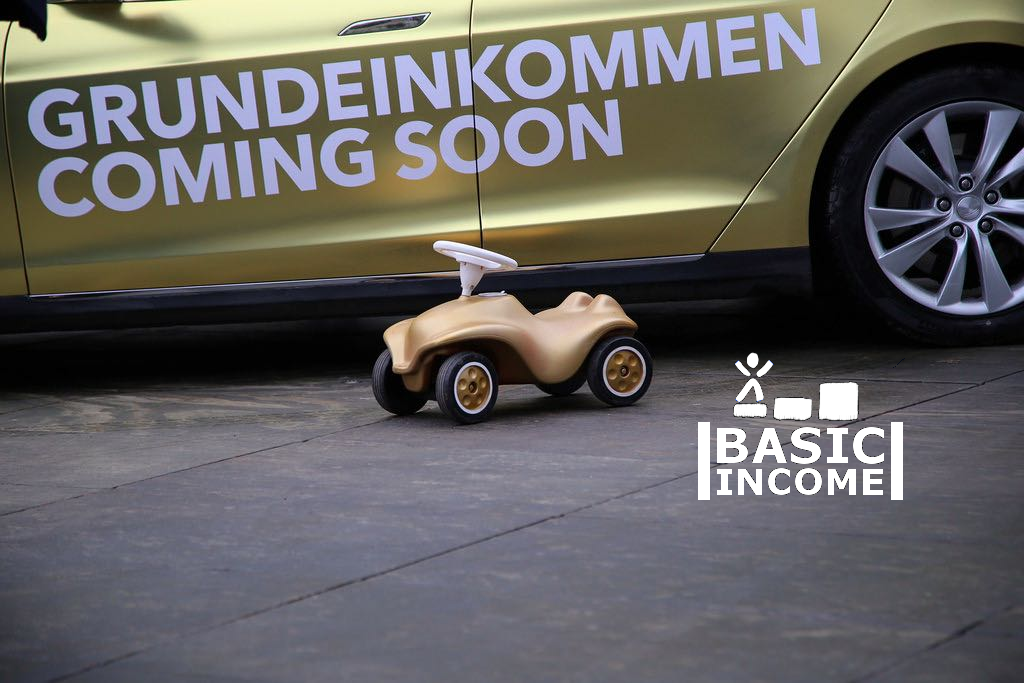 The notion of a universal basic income has been debated for decades in political, policy and academic circles. Proponents have ranged from street-activists to ivory tower academics, and have emerged from across the political spectrum. At the moment, the city Utrecht in the Netherlands is enrolling a new empirical trial and Finland is developing their research approach to collect fresh data to enrich future policy debate. However, the notion of a basic income isn’t just European. To understand it’s history, we should take a glimpse over the Atlantic ocean.

Back in the 1960s, one of the most influential proponents of the (wider!) notion of a basic income was Milton Friedman, the (in)famous neoliberal American economist and philosopher. His writings on the ‘Negative Income Tax’ – which supports people earning below a certain amount by exempting them from taxes to the government – fruitfully conjoined with progressive policy makers keen to re-think the current welfare system. The mingling of these strands of interest in the basic income led to a total of five experiments being carried out between 1968 and 1980 in North America.

One of the central concerns of policy makers as well as academics was how to address change in labour participation. With the steady decline of ‘full employment’ and no end in sights, many progressive policy makers were paying increasing attention to ‘the working poor’. This term was — and still often is — used to describe usually full-time, employed individuals whose low wages made it difficult or impossible for them to make ends meet. Similarly, low wages made it unattractive for welfare benefit recipients to take up a new job given that the historic benefit system foresaw a dollar-for-dollar reduction in their benefits with every penny earned from employment.

To many of those trying to crack this form of poverty in the 1960s, the basic income seemed attractive because it would provide a ‘close-knit’ social security net. In the US and Canada, several government social security programmes were at work, all of which included some but excluded other social groups. As a result, many at-risk individuals qualified for several programmes at once or none at all due to being single, elderly, deemed ‘employable’ or in work (like the ‘working poor’). It was argued that a basic income would close those loopholes, put an end to the confusing maze of programmes, and tackle the income insecurity of the working poor whilst also reducing administrative costs.

All five experiments were explicitly designed according to the norms and standards of natural science experiments. However, social field experiments are difficult to design, often costly and either morally or politically challenging to pursue. For instance, unlike in natural science experiments it is very difficult to ‘control’ the social environment, as it cannot be set up and monitored in a laboratory. Researchers would have to ensure that their ‘treatment’ (i.e. the regular and unconditional payment of a basic income) was really the driver of how freely people chose their career or how many months they stayed at home with their newborn. The often unavoidable weaknesses of social experiments also made these experiments a target for criticism with regard to the credibility of the studies.

All experiments randomly chose an experimental group and matched a control sample. They would attempt to match every single experimental participant with someone ‘as similar as possible’  – considering gender, age, income, family status, health status etc. This could be matched within the same area or, to avoid the effect the experiment could have on the area as a whole, another similar area. The idea behind this time-consuming measure is simple: the more alike the two matched individuals – and eventually the two matched groups – the more confidently we can claim that the change in behaviour is to due to the basic income and not unpredicted external effect such as an unemployment crisis or a shift in values.

The results from the five experiments, of which four took place in the United States and one in Canada, touch upon several policy areas. Many used both quantitive and qualitative research methodologies (although the latter were often the first to be dropped when funding dried up). All experiments used the aforementioned Negative Income Tax (NIT) as their ‘treatment’, sometimes combined with counselling and training. The NIT consisted of a cash transfer with a maximum benefit if the subject had no other income (i.e. not a universal income given to everyone but the right to unconditionally access it in need) and a rate at which the maximum benefit is reduced as other income rises. Thus, it substantially differed from the dollar-to-dollar reduction of the standard welfare programmes (mostly, rates of 50% were used).

Policy makers were most interested in its effect on (paid) labour market participation. Generally, the experiments caused moderate reduction in the wish/willingness of people to engage in paid work with different effects based on gender, and family role. While women reduced their hours in paid work on average by 17%, men only reduced them by 7%. Notably, the largest reductions occurred in the Seattle-Denver experiment, which offered the most generous payments. Female spouses re-entered the workforce less quickly after a child care break, basically using the payments as a form of paid parental leave. All experiments found that female spouses tended to take more time for household and care work. This effect was weaker in Indiana-based experiment that focused on single mothers.

However, there is some counter evidence to the apparently ‘genderising’ effect of the payments: the Seattle-Denver experiment found increased use of nurseries and kindergartens as opposed to family childcare. Taken together, this encourages a critical discussion on whether a basic income would necessarily ‘free’ societies from an array of social norms. Possibly, it also perpetuates those, say, gender norms that are otherwise challenged by the need to engage in paid work thereby halting its ‘degendering’ effect on other areas of life. Of course, the experiments have to be contextualised in their historic era and arguable the effect of a basic income would differ across cultural and political landscapes, depending for instance on the preexisting norms and policies surrounding childcare.

Unlike their parents the ‘tertiary earners’, back in the days mostly adolescent males, tended to invest their newly found freedom not in more housework but in schooling. Three experiments found significant effects on education, most of which are in line with the idea that economic security enables people to invest in their training longer by freeing them from the economic necessity to financially support their families or themselves.

The New Jersey/Pennsylvania experiment consisted of low-income couples from declining urban areas with additional data gathered about their children. The cash transfers over the course of four years had a positive effect on school continuation rates. Similarly, the Seattle-Denver experiment found a positive effect on adults continuing education beyond the high school level. The Canadian experiment also found a significant increase in 11 grade continuation but their results were stronger, probably as a result of one important methodological distinction.

The Canadian experiment was the only one to include a ‘saturation site’ – a town, where everyone and not just a selection of randomly chosen participants had access to the basic income. Around a third of the 10,000 inhabitants qualified for the payments at any point in time. This research was evidently more costly but much closer to the political vision of the proponents of the basic income. The potential social or collective change resulting from ‘a town without poverty’ was also planned to be explored by anthropological fieldwork (which was evaluated only much later due to financial constrains).

Nonetheless, the collective effect of a truly universal basic income probably explained the high grade 11 continuation rates. Researchers suspect that a social multiplier was at work, as young persons often mimicked the education choices of their classmates and friends. The more their friends decided to continue their education, the more likely the subjects were to not drop out of school. There was also evidence from one experiment on primary school performance, however results were weak and remain contested.

Furthermore, research showed that consumption patterns remained unchanged. A major motive for monitoring consumption levels and patterns was the prejudiced assumption of politicians that increased income would be spent on ‘frivolous products’ – a widespread accusation towards low-income families that remains in use even today. The summarised findings from these experiments offer evidence to the contrary. While consumption rose modestly in line with the increase in income, the pattern of expenditures stayed the same. Instead, recipients of the payments evidently invested most in their education and training. Some education scholars stress the relative remarkability of these results given the longstanding policy difficulties to influence dropout rates by direct intervention.

Lastly, the area of health yielded some mixed results. Discussions of data from the experiments suggest that neither medical care utilisation nor health status improved as a result of the cash transfers. However, some argue that the experiments were ill-designed to deliver high-quality data on topics other than labour market participation. Some researchers tried to make up for this by using otherwise available healthcare records of ‘the town without poverty’ (the ‘saturation site’) decades later.

They found that while the use of physicians remained stagnant during the period of the experiment, the hospitalisation rates declined by 19%. The important difference between those two measures is that the former is under the control of the patient (‘subject health measure’) but the latter is not, and thus arguably closer to a ‘objective health measure’. Importantly, they could also show that forms of illhealth sensitive to income insecurity, such as occasional injuries resulting from high-risk jobs or stress, also declined. Finally, hospitalisation due to mental health diagnoses followed the same pattern of decline during the experimental period.

The emerging threat of the oil crisis and ‘stagflation’ of the 1970s put a halt to the excitement of progressive policy makers to tackle poverty – let alone tackle it through the basic income and, in certain instances, it even put a stop to the funding of ongoing research. These historic experiments nonetheless offer intriguing insight into the complexity of empirically testing an idea as radically different than the basic universal: we must not forget that none of these experiment actually captured what this does to an entire community if their incomes are secured.

Though the validity of some of the findings have been contested, they offer moderate evidence that economic security has positive effects on education as well as health. The main purpose of these experiments, to test the effect of a basic income on labour market participation, was summarised as follows: ‘higher than hoped for by the proponents, but lower than suspected by the opponents’. If nothing else, this should encourage us to fuel the emerging upswing of the universal basic income!

Calnitsky, A. (2016) “More Normal than Welfare”: The Mincome Experiment,Stigma, and Community Experience

Munnel, A. H. (1986) Lessons from the Income Maintenance Experiments: An Overview

Widerquist, K. (2004) A failure to communicate: what (if anything) can we learn from the negative income tax experiments?

This article begins a series of articles in Ecosprinter lasting through July 2016. As a reader, you can expect one article on basic income each week of July.