The German Green Youth met for their 43rd General Assembly in Dresden from 10.-12. October. Alongside the 300 participants from Germany also some international guests from Austria, Norway and the Czech Republic were invited.

There are certain things which one can always count on: for example, general assemblies of the Green Youth of Germany will have endless supplies of Club Mate. You might think this oversupply of caffeine is necessary due to the long party nights that will inevitably take place when 300 young politicized people meet at such a congress. Far from it – the party was postponed because of the debates in the plenary, which went into overtime.

This is the second thing you can count on when visiting the biggest young green organization in Europa: the political discussions are broad, in-depth and held in all seriousness. When every member has the right to put forward a proposal or resolution to the assembly almost no important topic is left out. From micro-plastic, world trade & TTIP, domestic and security policies, climate change, refugee’s rights to the right-wing populism of the newly formed party AfD, time was too limited to discuss it all. 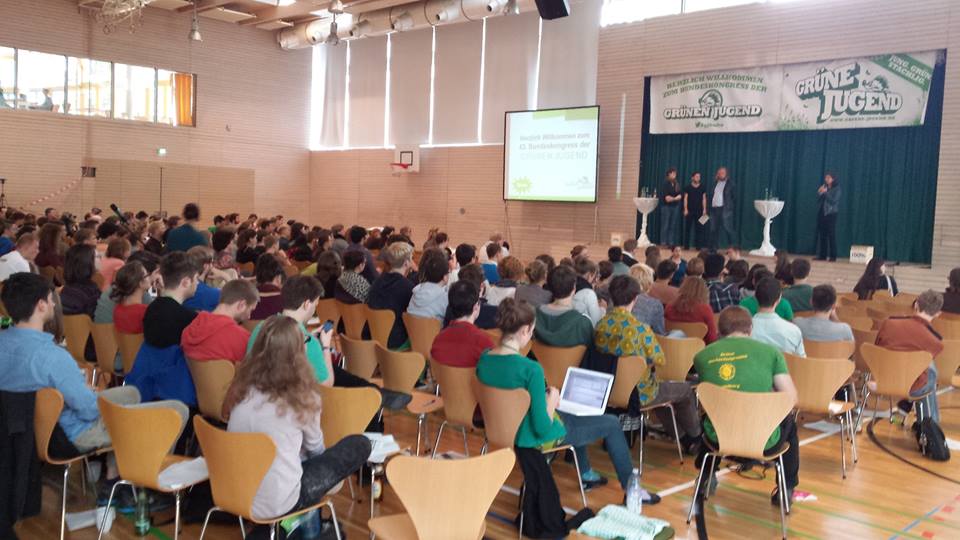 However, the most intense debates in the plenary as well as offside were about two other topics. First, the controversial approval of the so-called “asylum-compromise” by the Green prime minister of Baden-Württemberg, Winfried Kretschmann, was heavily criticized by the Green Youth. When the heads of the Green Parliamentary Group in the Bundestag, the national parliament, were facing the questions from the plenary, this was one of the most emotional topics.

The other issue was the question of military intervention in the besieged Kurdish-syrian city Kobane to prevent a genocide put forward in an urgent motion by the executive committee. Interestingly enough it was not about if a military invention should take place or not but rather if it should be on the basis of a UN-mandate and if it should be backed by weapon deliveries. Out on top came the rather idealist view to support an intervention with UN-mandate, opposing direct weapon deliveries to the Kurdish People’s Protection Units.
With guests from other young green organizations and from the Federation of Young European Greens the exchange of ideas, opinions and strategies overcame the national context. In the end, the party was also not forgotten as people remembered the motto of the general assembly: “Abschalten nicht vergessen!”*

*ECOSPRINTER NOTE: This means something along the lines of ‘don’t forget to take it easy,’ but is so uniquely German that we couldn’t find a good translation. Can you?

Daniel Haim is a member of the Austrian Young Greens. He currently lives in Oswiecim, Poland.