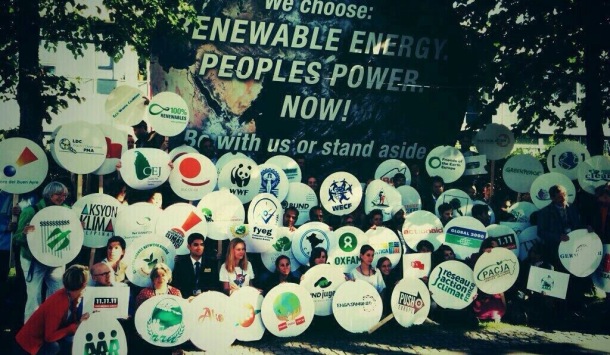 Maybe some of you remember last year’s climate conference. It happened last November in Poland and was called COP19. COP is UN-slang and means “Conference of the Parties”, the highest decision making body of the UNFCCC. A lot of non-governmental organizations use UN-Slang as well, sometimes a little bit changed. At my first COP, I have been asked, what this acronym means…and suddenly someone shouted through the room: “Conference of Polluters!”

To my naive mind came the first thought: “What is he talking about?” But now, over two and a half year later, I think it is kind of true. For various reasons, over 800 members of NGOs walked out of the talks, saying “COP 19 – Polluters talk, we walk”. This had various reasons, and I will just mention three of them. First, COP 19 was the first Climate Summit ever which has been funded by private finance. The sponsors were Flying Emirates, BMW and so on – companies not known for their green image. Second, while the COP was still ongoing, the Polish environmental minister was fired. At the same time, he was chairing the climate talks. In the end, the reason seemed to be not enough promotion of shale gas. Third, there was (and is still) not enough progress in the negotiations and the countries are continuing burning our planet.

Back then, our back bore the words“#Volveremos – we will come back!

People are already on the streets to prevent dangerous change. Many students try to divest their universities, all over Europe people are protesting against fracking, in the US and Canada a movement is demonstrating against Keystone XL. These are only a few examples. People are standing up and participating in the efforts to bring this planet back on track.

So why shouldn’t we? The UNFCCC is the only possibility to reach a global treaty affecting the very different facettes of global warming.

“In the coming weeks and months, towards and during the Social COP in Venezuela, the People’s Summit and the COP20 in Peru, and the COP 21 in France, we will be fighting harder than ever for governments to:

Commit to a global goal of limiting warming that recognizes the latest IPCC’s warnings on the threats of tipping points, and to the right to food and food sovereignty, recalling that science suggests that 1.5C of warming would be too much for many vulnerable peoples and countries.

Deliver a swift global transformation away from the use of dirty fossil fuel and destructive energy systems driving the crisis, towards a carbon-free and renewable energy economy that, primarily amongst others, is decentralized, community controlled, affordable, accessible to all people for their basic needs and well-being;

Urgently scale up targets for emissions cuts in the pre-2020 period, and set emission targets comparable to the scale of the emergency for 2020-2025;
Ensure equitable and fair sharing of efforts among all countries based on their historical responsibility, their capacities, and the urgency of the crisis
Enable people to deal with climate impacts by protecting the rights of peoples and communities, building resilience, addressing loss and damage, and ensuring a just transition to climate resilient, low carbon, equitable and democratic economy and society.

You can read the full declaration here

To come back does not only mean to strengthen ambitions of governments, it is also homework for everyone of us: To boost and build a Global Cimate Movement for the Climate Summit 2015, taking place in Paris. This is last chance we have for a global legislation to stop the climate crisis.
So: stand with us or stand aside!