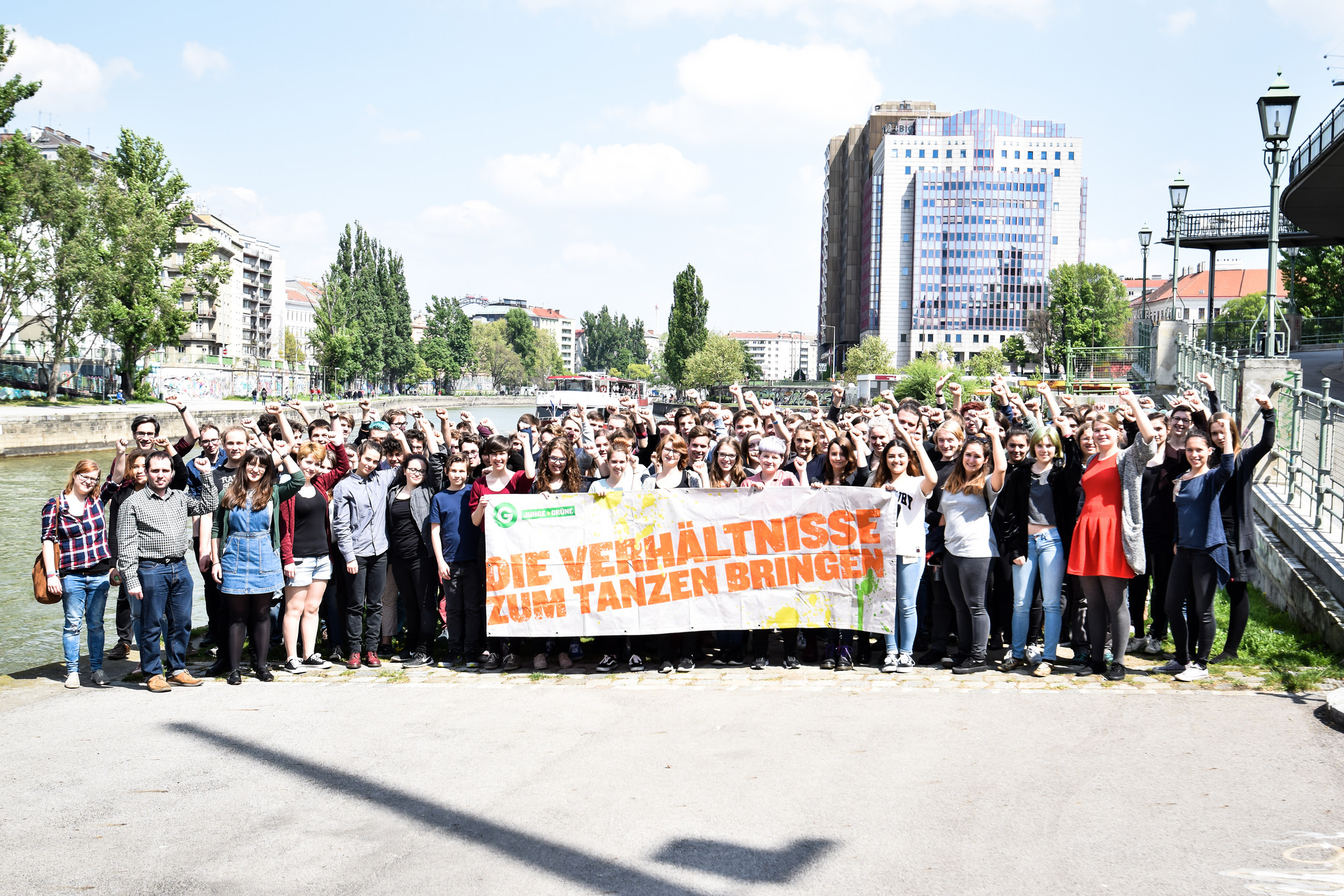 The Young Greens Austria were recently kicked out of the Green Party in Austria. Despite the ensuing challenges they decided to continue their political work.

The Young Greens and the Party

Nearly all of our activists joined the Young Greens because they wanted to do something against the rise of the far-right in Austria. But from the beginning it had been very clear to us that to change the world or even only to tackle the far-right, we will need to organize as many people as possible at grass-root level and become more professional. So our organisation’s main aim has always been to establish new groups, organize more activists and to enable young people to learn and act collectively.

The relationship to the Green Party has always been friendly, though distant and marked by the Young Green’s high degree of autonomy. At no point in our history we saw ourselves as the youth wing bound by unconditional solidarity to the party, serving only as a source of cheap labour for election campaigns or as a supply of party careerists. This didn’t mean we weren’t interested in the Greens and their policies. On the contrary! We used election times to reach out to young people with campaigns of our own, on issues as diverse as the legalisation of cannabis, anti-racism or free public transport which not only benefited the development of our organisation but also the Green Party. We also discussed in depth the history and policies of parties, the roots of their crises and possible critiques.

Our critique of the Green Party

our main point of criticism has always been that the party has to be more open and democratic to mobilise more people for their politics if they actually want to achieve significant change in our society. But the party evolved solely into a campaign apparatus. Highly professional at technical level but with few political visions where societal change should lead to or how to achieve it. We saw ourselves, the young greens, as those living what we criticised in others. We acquired more members and developed further while at the same time  activists the means and space to empower themselves.

For the Greens politics is about managing society in the best way possible. They debate political questions as if they were technical and thus also find their answer for political problems in technical solutions. As a result of this post-ideological view of politics, the Greens developed into a highly technocratic political group, which doesn’t want to change the world at all. It seemed to us that they want to manage society differently, not actually change it. At the end everything stays the same, you just feel better by managing it better.

It was a conflict about two contrasting notions of politics. The Young Greens want to achieve societal change by empowering more people at the base of society, and the Green Party want to develop a party apparatus, which encapsulated itself from rank and file. This conflict, long suppressed, finally escalated at the student union elections in May 2017. For decades the green student union remained a small group of 30-40 people on national level. Any attempt from local groups to organise more people had previously been blocked by a few people who wanted to keep the status quo. Structurally this student union operated on a principle of total consent of all members, which made reform and organisation of more activists virtually impossible. Because of this, the big local groups of the old student union decided to found a new student union, with a democratic majority vote system for decisions so that new members can be integrated in the decision making easily and decision are made in ways  transparent for everyone. This new student union was been supported by the Young Greens as they shared its convictions. The Green Party leadership had always been in favor of the old, relatively small student union, which in virtue of its structures annihilated  every effort to grow. The new student union, on the other hand, already had twice as many members in just a few months. Partly because of this the Green party leadership failed it’s main task to mediate a constructive solution for both their student unions. Because they also didn’t want the new student union to run for office they opted to crush the new student union.

The future of the Greens

In October the Greens lost all their parliamentary seats as they sagged from 13 percent to less than 4 percent of the electoral vote. As the election outcomes (greens out of parliament, far-right government) has proven, the green strategy against the far-right has failed. One might argue that the Greens learn from the mistakes made, open up for rank and file and dare to gain a political vision again, they might have a comeback in parliament at the elections in five years. But they definitely need a strong and critical youth organisation, as the form the backbone for a long-time stable party development.

The future of the Young Greens

As a result of our year-long critique of the mother party we knew that a new left party in Austria was needed more than ever. Despite this necessity we had not planned to form such a party. We had neither financial means nor organisational resources to start such a project. Moreover we knew that it would form an near impossible task as the current left has no idea of how to abolish our society as we know it.

However, we cannot hope for some magic to happen that will give us the party the world (or Austria) needs, if we do not start it ourselves. Following the call for a snap election in October 2017, the Young Greens began to look at their options for further political work. The discussions with various left-wing forces lead to the formation of KPÖ PLUS, which includes the Communist Party of Austria (KPÖ) and the Platform PLUS. PLUS stands for “Plattform unabhängig und solidarisch” (Independent and Solidary Platform), an independent, multi-party platform, which forms the initiative for a new left party. KPÖ PLUS will continue to use the opportunity of elections in the next years to campaign for change going beyond the possibilities of the parliamentary system. PLUS will develop the  platform’s political positions and structures at a congress in Juni.

A new party may be the main benchmark for the left to be able to become a relevant factor again. We strongly believe that such an organisation can only be developed from below. This requires time. The need for a youth organisation that enables young people to build up something bigger than themselves remains. The Young Greens plan to rename themselves at their assembly in June and will continue to organise and empower young people at local, regional and national level.
_________________________

Jakob is political secretary of the Austrian Young Greens, lives in Vienna and was formerly a member of the Ecosprinter Editorial Board.