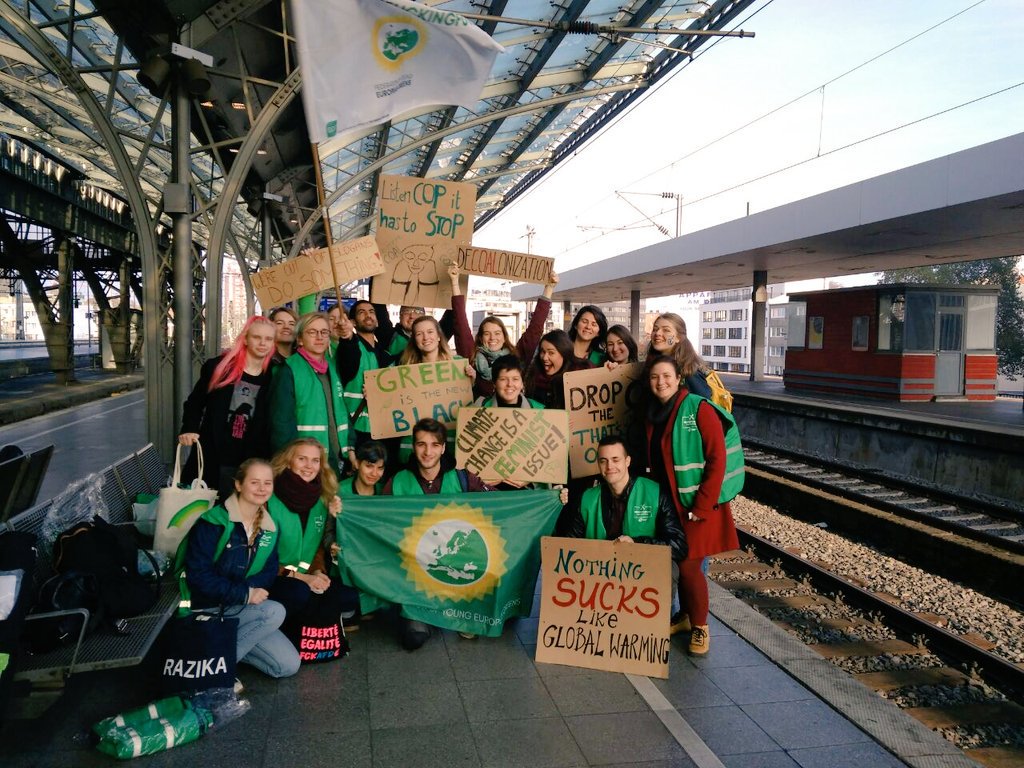 Yesterday, we published the report of this year’s FYEG delegation to COP23.
Today, they share their insights to the negation process and advise for COP24.

The negotiation process in COPs is always very tiring for observer organizations. Parties decide autonomously if they want to open the discussions to civil society or not. This means that if one party decides to discuss an issue only among parties themselves, all NGOs are left out of the discussion and the session is closed. This happened a lot during this COP, during finance and gender talks. This makes it very hard for observers to follow the details of discussions and when which decision is made. During negotiations that are open to civil society, we are allowed to sit in the back of the room, take notes and follow what is being discussed. Our strategy to influence the outcomes of these talks not during the negotiations, during which the Youth NGOs are sometimes allowed to have interventions (= 2 minutes speech). The most important influencing strategy is to contact negotiators after sessions and in between talks. We make appointments with negotiators from different countries and try to lobby for our interests this way. This means you need to be very attentive and get as much information as possible from the negotiations (especially about sessions that are not open to civil society). Information is gold during COPs and your goal is always to seek for information as there are a lot of rumors going around.

When we managed to have an appointment with the negotiators, we gave them our position paper and showed them what the youth perspective is on this specific topic and how we want them to continue their negotiations. Our position is always more ambitious than that of most negotiators and is mainly aimed at pushing countries from the global north to be more responsible. Besides lobbying, there is the possibility of organizing or participating in actions inside the UN area. These actions can take the form of small demonstrations near spots where the negotiators pass by, for example. This way, we can pressure them once again and demonstrate that civil society wishes to have a more ambitious outcome of the talks.

For future delegates & visitors of COP

The most important thing is not to get lost in the huge universe of COP negotiations. One needs to focus on one or two discussion topics and follow only these negotiations, otherwise the big amount of different topics discussed will be confusing you throughout the whole week. FYEG delegation tries to send observers that divide the most important topics themselves and have one observer in each area.
This one person will go to all negations on his/her assigned topic and report back every day.
These areas are divided as follows:

It is important to have a smooth information exchange from delegations from the previous years to the new delegation. This information transfer will help the new delegation to have an easier start.
Other than that, all youth NGOs = YOUNGO get together in the morning of each negotiation day to share information on each topic. FYEG is part of YOUNGO and helps with the work within this constituency during COPs. Of you have any problems finding information, the YOUNGO focal points or other activists will always help you. Go to the morning meetings and you will get a good idea of what to expect during each day.

Another useful source of information is the climate tracker. They offer trainings for new delegates and organize daily briefings on the current state of the negotiations. On their website and social media, you can find useful infographics on important topics.

What to expect in COP24

The major objective for COP24 is an agreeing upon the Paris rulebook. The rulebook will define the details of how countries implement the Paris agreement. The 24th Conference of the Parties will be held in Katowice, Poland. The country has hosted COPs several times – the last one being the COP19 in Warsaw. This COP  is known in the history of COPs for its epic failure to take essential steps towards a global agreement and deliver urgency to climate action. For civil society, Warsaw was a huge disappointment. Therefore, expectations for the presidency of COP24 are somewhat low or doubtful. However, COP24 carries high expectations, as the parties are expected to reach some key milestones and reach them well. Without success in COP24, the success of COP21 in Paris falls short.

Poland is a traditional coal state ans Katowice a home to EU’s largest coal company. Whether Katowice’s will highlight the transition from fossil industry to renewable solutions, remains to be seen during Polish presidency’s actions during 2018. So far, Poland has not stood among the states of climate ambitious EU bloc, but instead acted rather reluctant. Poland has an exceptional momentum to turn its course and show leadership in climate transition.

In 2018, there will be some major deadlines ahead in climate negotiations. Deadline for submitting countries’ additional pre-2020 action information is set in May and in October, the much anticipated IPCC special report of roadmap to 1,5 C degrees will be released. We already know, that the NDC’s of the countries are not sufficient to keep global warming below 2 degrees. That is why all preparatory phases before COP24 need to aim for encouraging countries to submit more ambitious NDC’s and more emission reductions.

In 2018, countries need to finalise the rulebook to achieve the targets set in the Paris Agreement, take the conclusions of the most recent IPCC’s report seriously and reach meaningful, ambitious and binding results in several agenda items in COP24.