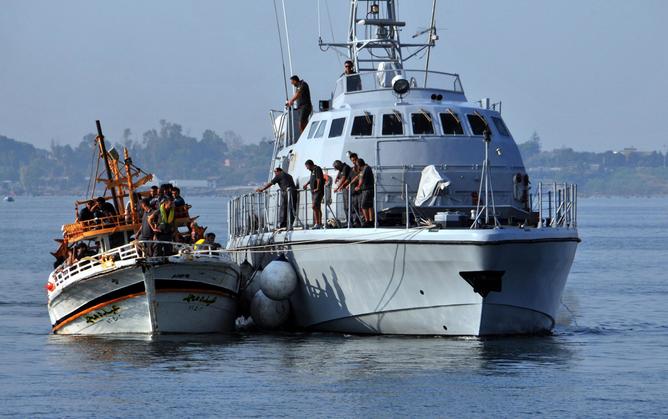 As the migrant crisis in the Mediterranean continues, the public outcry against deaths at sea has forced the European Union (EU) into response mode. EU officials and member states have promised to do something about the situation. Alongside discussions about resettlement agreements, there are proposals to destroy the boats used by migrant smugglers before they can leave Libya.

But this highly controversial use of force would be problematic and counterproductive on a number of levels. One of its many problems is that the destruction of boats does not help those who are in need of refuge.

So it’s interesting to consider what the European Court of Human Rights – which presents itself as “the conscience of Europe” – might think about this.

As a judicial rather than a political body, the court would not, of course, directly comment. Nonetheless, its 2012 judgement in the case of Hirsi Jamaa v. Italy may shed some light upon its views.

The applicants in the Hirsi case were “irregular” migrants – meaning they were travelling without a visa – who were intercepted by the Italian authorities on the Mediterranean Sea. The migrants boarded an Italian military ship, apparently after having been told it would take them to Italy. Instead, they were returned to Libya, without having their identity recorded, and without being given the chance to claim asylum.

The court found multiple violations of the European Convention on Human Rights. It found a breach of the provision prohibiting the collective expulsion of aliens (Article 4, Protocol 4). And despite the fact that no migrant on board the military ships had claimed asylum or requested international protection, the court did not hesitate to rule that Italy had exposed the migrants to the risk of inhuman and degrading treatment by returning them to Libya (contrary to Article 3). In the end, the court reproached the Italian authorities for not having offered the migrants a domestic remedy in Italy (contrary to Article 13).

The most logical way to repair the violations might have been to invite the migrants back in Italy. This would have enabled them to have any claims for asylum, or against expulsion, duly examined. One judge did forcefully put this reasoning forward, but the other 16 judges who decided the Hirsi Jamaa case took a different line.

The court normally says nothing about how a state should repair denounced violations. In this case, however, the court indicated that the Italian government should take all possible steps to obtain assurances from the Libyan authorities that the applicants in the case would not be subjected to inhuman and degrading treatment in Libya, or arbitrarily repatriated to other countries. This indication was the most surprising since Italy’s actions had been found in violation of the European Convention on Human Rights precisely because the court had considered Libyan promises to respect human rights hollow.

It’s difficult to know how to explain this move without seeing a double talk, if not outright hypocrisy. The court may have wanted to have an easy solution at hand in case of a surge in applications from migrants intercepted at sea. Another possibility is that the court feared that preventing a state from returning migrants summarily would amount to encouraging an open-border policy and would provoke resistance from European states. This would have led it to end its judgement in a way that mitigated its findings.

Whatever the court’s motivations, the Hirsi outcome reads like a concession to the respondent state: the consequences of finding multiple violations were more or less annulled. This suggests that it’s unlikely the European Court of Human Rights would be the harshest critic of EU measures that fail to achieve their purported aim of preventing deaths and protecting refugees.

This is paradoxical. As its name indicates, the European Court of Human Rights should be about protecting human rights. Moreover, the court asserts that Article 3 of the European Convention on Human Rights – which prohibits inhuman and degrading treatment – suffers no exception, whatever the circumstances. As I discuss elsewhere, the court is far less protective of the rights of migrants and other claimants than the public – especially the UK public – is led to believe.

Does this mean we don’t need the court, and can do away with the Human Rights Act in the United Kingdom, as proposed by the current Conservative government? Not at all. If anything, we need stronger – not weaker – protection of human rights in Europe. The way forward is not to destroy the institutions responsible for upholding human rights, but to reinforce their capability.