This 23 September, UN Secretary-General Ban Ki-moon has invited world leaders, from government, finance, business, and civil society to a new Climate Summit, after the one in 2009 for Copenhagen, to “galvanize and catalyze climate action”. A few days before the Summit, what can we expect of it?

By organizing this high-level event, M. Ban has asked these leaders to bring bold announcements and actions to the Summit that will reduce emissions, strengthen climate resilience, and mobilize political will for a meaningful legal agreement at the COP21, in Paris, 2015. 125 heads of state and governments will attend the Summit. This is the largest amount of world leaders to ever attend a climate meeting, and it is a unique opportunity for leaders to champion an ambitious vision, anchored in action that will enable a meaningful global agreement in Paris.

Expected & awaited by stakeholders for a long time, mornings will be dedicated to statements from Heads of State, where new commitments for the Green Climate Fund are expected. At the same time, a few policy rooms are scheduled to discuss on the 8 action areas (mentioned below) which will be discussed in the afternoon.

Then a lunch will be provided by the Global Compact (the United Nations initiative to encourage businesses worldwide to adopt sustainable and socially responsible policies) with business leaders and heads of state and government, whose theme will be the price of carbon.

Afternoons will be dedicated to multilateral and multi-stakeholders action announcements in eight thematic areas (Finance; Energy; Forests; Agriculture; Resilience; Transports; Cities; Petroleum & industry), also divided in three plenaries. A few international cooperative initiatives will be highlighted, including new launchings, as for examples the UNEP Energy Efficiency Accelerators, the SIDS Lighthouse Initiative, the CCAC Oil and Gas Methane Partnership, the Compact of Mayors, the Global Fuel Economy Initiative, the CCAC “Addressing HCFs” Initiative, the Global Alliance for Climate Smart Agriculture, and a few others. These initiatives have been identified at the ministerial meetings in Abu Dhabi (Abu Dhabi Ascent 2014) last May. In complement of these action areas sessions, 4 thematic discussions are launched. Themes are science, health and jobs, economic case for action, and voices from the frontlines (see the diagram below).

The Climate Summit will be surrounded by numerous side events that will be organized as part of the week on climate in New York, the Climate Week NYC 2014. 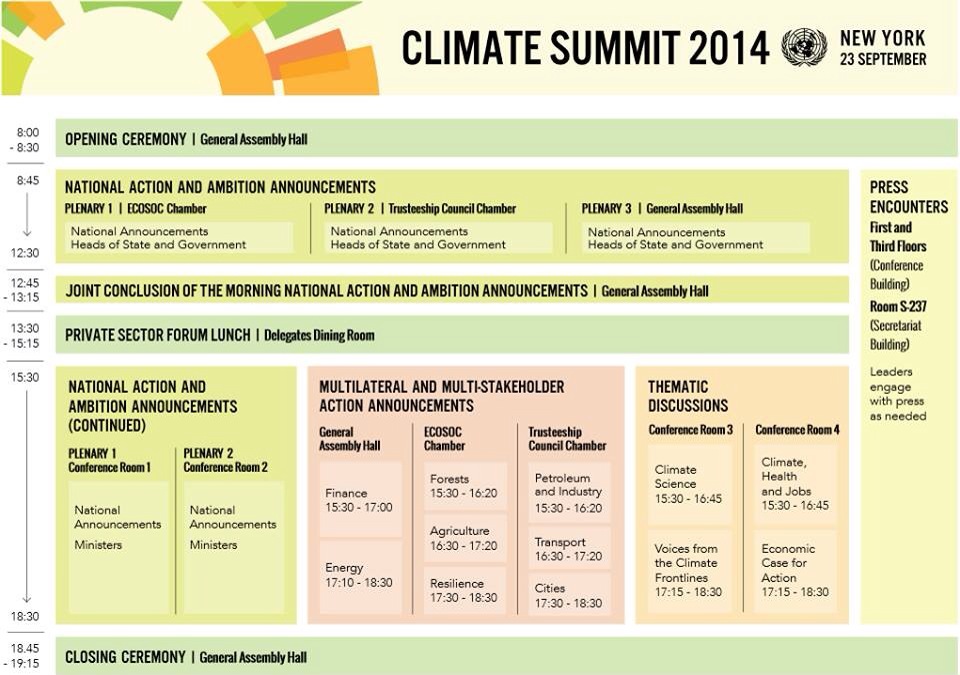 An oversold Summit?
The Ban Ki-moon Summit is an independent political moment of the climate negotiations, but must lead to a mobilization of state and non-state actors, and to more and more concrete links with the negotiation process.

Thus, the civil society momentum, incarnate especially by the largest march for climate in history, organized on September 21, is, although quite desirable, truly disproportionate as the Summit will result no negotiated outcome. The Summit is only a platform to push the political & economic leaders to increase their financial commitments and in some of the initiatives detailed above. The decisions are taken only during the Conference of Parties, that’s why the COP20 in Lima and the COP21 in Paris are the terms for huge momentum.

The real issues of the Summit are the funding of the Green Climate Fund and the place of international cooperation initiatives in relation to the negotiation process, including the terms of recognition of these initiatives by the latter. But nothing guarantees that the dynamic around these two issues will be enhanced after the Summit.
To do this, such dynamics cannot be punctual. It also raises the question of the monitoring and the strengthening of actions launched and of their political support.

And at this point nothing seems to be designing. An extended follow-up by the UN Secretariat General is not guaranteed, and nothing suggests the role of Peruvian and French presidencies in these political portage issues. Some mystery therefore remains on the success of the Summit. In any case, it would be a success if the political dynamics could be extended and catalyzed in the long-term. 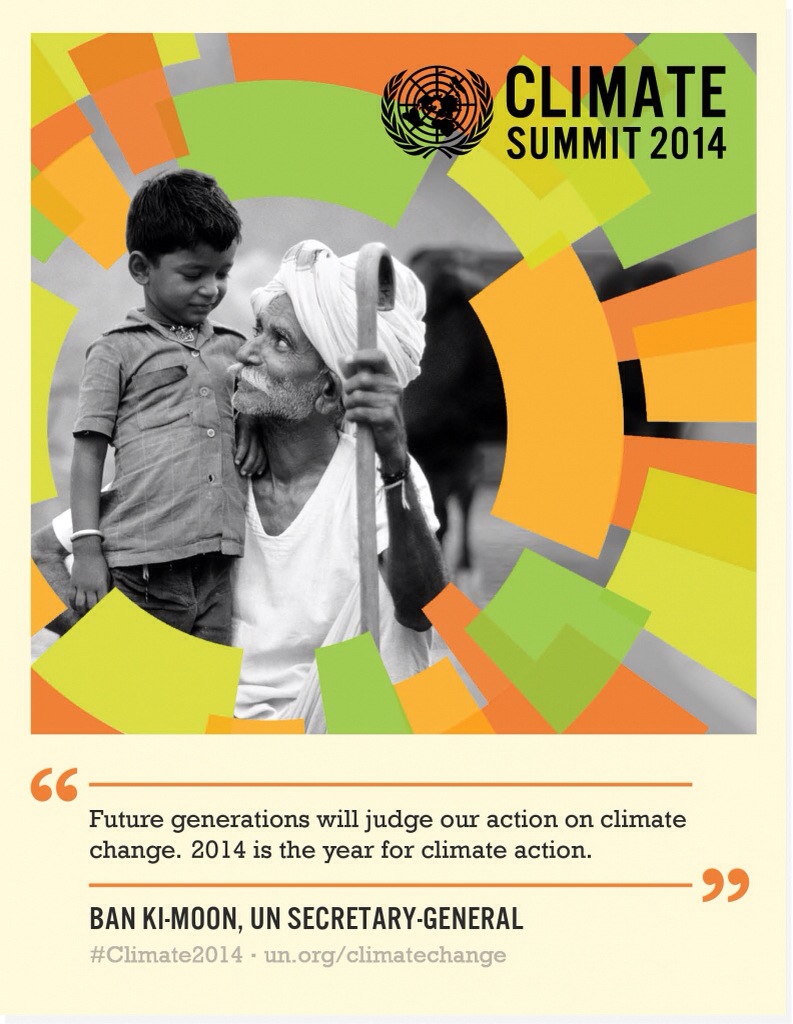 Reminder of the Calendar of events:

23 September 2014 – UN Secretary General Summit
20-24 October 2014: ADP 2-6 Meeting
SB41 sessions, including ADP2-6 in Bonn. This meeting is scheduled additionally to have further discussions on the intended national determined contributions (iNDC) modalities and on the 2015 calendar which will be decided in Lima.
23-24 October 2014: European Council
Term fixed for a decision, still uncertain, on the 2030 energy-climate package. The package is likely to the European Union’s contributions for COP21 in Paris.
4-7 November : Pre-COP20 in Caracas
This “Social pre-COP” will welcome civil society organizations from all over the world, including those attending the UNFCCC negotiations or involved in other UN processes, as well as organizations with no formal UN status
1-13 December : COP20 in Lima
This COP is crucial to fix a strong 2015 timetable which will be necessary for the elaboration of an ambitious agreement in Paris.
December 2015 : COP21 in Paris:
Signing of a new “protocol, another legal instrument or an agreed outcome with legal force under the United Nations Framework Convention on Climate Change applicable to all Parties” for entry into force in 2020.

Clement is a member of CliMates, a student organization mobilizing action towards fighting climate change. You can read more about Clement here.