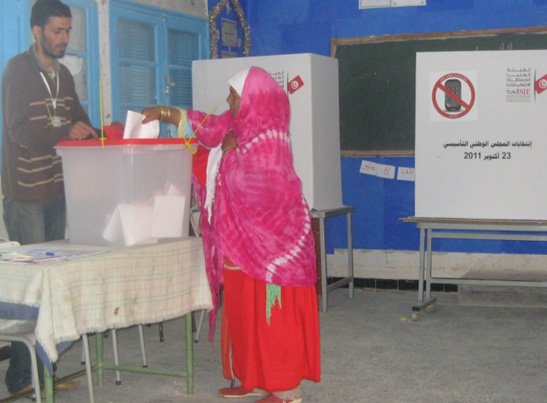 In the context of a women exchange between Tunisian activists and Grüne Jugend (Young Greens of Germany), Sabine Hackbarth (participant in the exchange, green youth activist and spokesperson of the women’s group of the University in Mainz) organized a lecture at her University about women in Tunisia and in the revolution. For this, she invited Olfa Jelassi and Nesrine Mansouri (law student and participant in the exchange program) to arrive prior to the official exchange, which took place in Berlin one day later. This article is a summary of the content of the conference in Mainz University.

Global debates in 2011, have been marked by two big events, on the one hand the economic crisis and, on the other hand, the revolutionary movements for democracy, >freedom, social justice and dignity started in Tunisia and spread in Arab world (Arab spring ) and worldwide (occupy movement).

Tunisia is a Mediterranean country in North Africa, independent since March 20th, 1956 and which declared itself as Republic of Tunisia in July 25th 1957. With 11.5 million of inhabitants which 18, 2 % of them present youth population and half of them female population, the Tunisian popular uprising has been highly driven by youth and women.

In fact, the revolutionary movement started in September 17th 2010 when a young Tunisian set himself in fire, protesting economic and social conditions, and the movement continued after him until the fall of Ben Ali January 14th 2011. Tunisian women from all activity sectors, age and regions strongly participated in the revolutionary struggle side by side with men. This massive participation is especially due to the women rights status in Tunisia that are often denied to women in neighboring countries.

Solely, the debates on women rights in Tunisia was highlighted both at the Tunisian level as part of a national debate, especially during and after the election of the 23rd October 2011 . Moreover, women rights and women status in Tunisia , become one of the most discussed subject after the elections results and the fact that an Islamic party got the majority of the National constituent assembly led the troika in the transitional government. Otherwise, women participation or women rights were not a new issue for the Tunisian society, in contrary, Tunisian women have a long story of struggle: Elissa, the Founder of ancient city ‘Carthage’, the Jewish Berber queen Kahina was a powerful Symbol of female resistance in the Nomedian period, and so on.. and so on.

In the contemporary history and in the beginning of the 20th century, a new generation of feminist movements and activists focused on fighting against the French colonization such Majida Boulila , who was arrested by French colonial authorities for her political activities. She became the symbol of the liberation of Tunisian women. This women’s emancipation movement culminated with the creation of the first women’s organization in 1936, the Tunisian Women’s Islamic Union, later replaced by the Tunisian National Women’s Union in 1956 after the independence.

Following independence, the reform movement for women participation led to the launch of The Code of Personal Status (*) in 1956 which promoted women rights by reaching legal and other types of changes beneficial to women and thus to society as a whole such marriage, divorce, inheritance, child custody ,adoption and polygamy abolishing. This 1956 code was a result of reformist movement led by nationalist thinkers like Tahar Haddad (a Tunisian Muslim reformer, who proposed a new reading for women’s rights in Islamic law and campaigned to educate women) and political decision especially under the rule of the first president of Tunisia, Habib bourguiba (1956-1987).

In this context, the feminist movements grew up with the foundation of an independent feminist movement so called ATFD in 1959: The Tunisian Association for democratic women, which works within the universal human rights framework, fights for equality between men and women, and the abolishment of discrimination and violence against women. Few years later, in 1989, another same feminist movement as the ATFD was created, the Tunisian women association for research and development, AFTURD, but this movement has chosen to focus on research and development rather than lobby and advocacy .

Nevertheless, those vested rights (the code status , the right to vote in 1957, the equal pay gap..), could not hide some negative points (single mother status and heritage ) and policies during both Bourgiba and Ben Ali regimes: in fact,they adopted an anti-Hijab policy, although its population is 98% Muslim. Bourguiba tried to liberate women but at the same time, he imposed on women’sonemoderniststyle, he was critic to women veil. The same policy was adopted by Ben Ali, yet, Ben Ali promoted women rights to cover his dictatorship and used it as vitrine. Tunisian women gained from his legal system, as they are now highly educated and occupy various positions within the Tunisian socity: actually, the youth literacy rate is of 96 % for female youth and 98 % for male youth. Indeed, the net enrolment ratio in primary education is roughly equal for girls and boys (99 % for girls and 98 % for boys), according to statistics from 2009. (SOURCE : [1],[2],[3] and [4])

However, women played an active role in civil society and political parties against the dictatorship. Maya Jribi ( NCA Member, PDP/Republican Party), Radhia Nasraoui (lawyer active in the field of human rights for over thirty years fighting particularly against torture, co-founder of the anti-torture association), Samia Abbou (NCA member (CPR) andTunisian lawyer) and Sihem Benseddrine are the most famous figures of this fight. (Source: [5])

During the revolution, women were among those who participated in the revolutionary struggle in the streets, in the sits-in and in the election process. In fact, when the decision to hold elections of the National Constituent Assembly was confirmed, women participated in the democratic process in a number of ways: They joined revolutionary institutions such as the High Office for the realization of the Objectives of the revolution, political reform and democratic transition (which developed the legislative decree N35/2011 of 10 May 2011(concerning the election of the Constituent Assembly (Official Journal No. 35 of May 10, 2011 p.747)) and the establishment of an independent body for the High elections (ISIE)). As a result of those women’s activism, the transitional government adopted a gender parity law for the election of the 23rd October 2011. Unfortunately, despite the lobby, women candidates headed only over 7% of the party lists. As a result, there are currently 49 women in the Tunisian National Constituent Assembly (NCA), out of the 217 deputies elected last fall to draft a new constitution (27%). (source:[6])

Women also actively participate in the voters registration tasks: Women represented 45% of the 3.882.727 Tunisian over 18 years of age enrolled in the electoral registers (55% of 7 million voters) and 51 % of the enrolled population between 18 and 35 years old . (source: [6])

Women’s struggle continues to protect women rights achievements in the new constitution, as recently, they changed the “complementarily’ to ‘equality’ in the constitution drafting.

Yet, Tunisia has a successful model, though still facing many issues in regards to its the declining economic situation, corruption, regionalism, growing security concerns, unemployment and the rising cost of life.. Yet at the moment there is no point to be satisfied. Protection and promotion of women rights in Tunisia remains a challenge, in order to achieve full participation, fight stereotypes and change deeply rooted mentalities. The biggest challenge is to have the Tunisian women rights model, neither the European model either the Saudi or Afghan model. As we are Tunisian women and we are proud to be so , we will continue struggling for our rights, with no fear !

* The Personal Status Code (PSC) (Arabic: مجلة الأحوال الشخصية ) :a series of laws enacted on August 13, 1956 by Bey Decree and entered into effect on January 1, 1957. Popularly perceived as aiming for the achievement of equality between men and women in many areas. 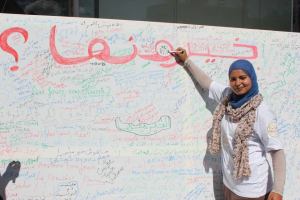