Frustrated about people dying of theoretically treatable diseases because pharmaceutical producers have nothing better to do than creating hundreds of new medicines for mild western diseases, while they do almost nothing against Malaria, Schitosomia and HIV?
The explanation for this is simple: While People from the Global North can pay much for medicine against colds, pain and other diseases, people from the Global South can’t pay enough to save their lives, which means they don’t fit into the profit plans of these companies. Why develop a cure for Malaria if nobody can buy it?
This sounds as cruel and unhuman as it is. Because of that, it’s good that other people care and engage themselves for treatment of neglected diseases. Several Years ago, the Company IBM launched a network called BOINC that allows people do donate their computer power to participate in big calculations that could otherwise only be run by supercomputers. With this tool existing, researchers started a project called World Community Grid running on that platform. It is a downloadable tool that allows people to join their computer power together to support research on humanitary and ecological research. As research, especially on diseases, also takes many calculations, researchers away from mainstream companies often can’t afford to run it without the means of good computers.

That’s why World Community Grid enables them to run their calculations with the help of the people donating their CPU time there. Being a member of WCG, you can support research on Topics like AIDS/HIV, Malaria, Schitosomia, Leishmaniaosis, Muscular Distrophy and Cancer, but also for research on alternative energies and water pollution. And there are constantly new projects coming up.

People who decide to download the WCG Software can always choose how it may use their computer, which means which percentage of the CPU, the graphics card and the working memory may be used and whether it may always run when the computer is on or only when it’s running idle. Your data and computer are absolutely protected, as the software does nothing else than downloading Tasks, calculating them through and loading them up again.

And if you are scientifically interested, this community is also a place for you, as they have got a Forum where they discuss about scientific research, the newest results and much, much more.
Like the newest result the Network was able to find: With the help of the thousands of participants, World Community Grid was able to find a new treatment for several kinds of childhood cancer which might, as soon as it’s fully developed, save many young lives.

If you want to become part of this, just register here and download the WCG software, to support humitary causes just with your Computer. 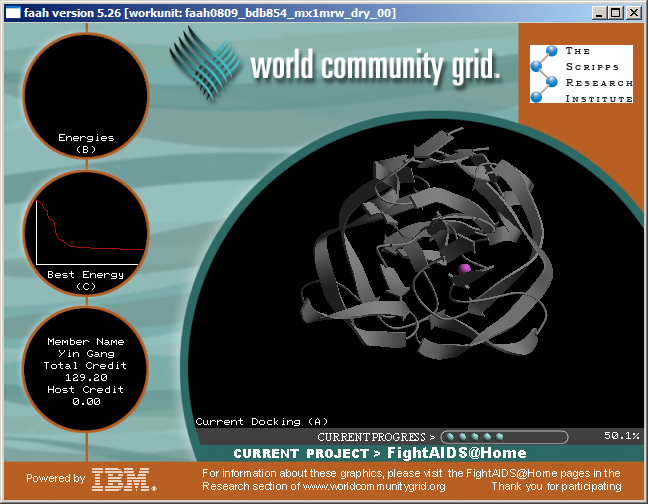 This is how running research on your computer can look like