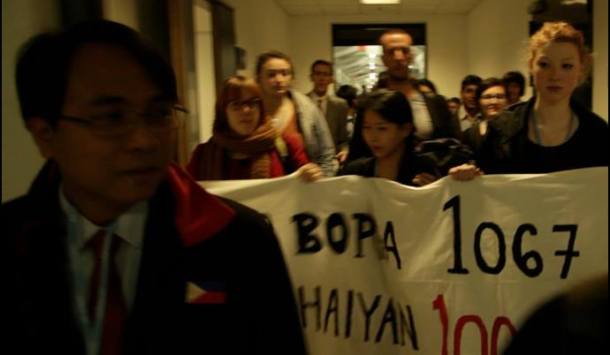 The Federation  of Young European Greens, gathering young Green organisations and activists from all over Europe, has always taken Climate Change and negotiations seriously, and for many years have been involved in the previous COP. This year, while Climate Change negotiations are taking place in Warsaw, the FYEG sent four delegates to the talks, making youth matter in an environment where suits and ties of white hair men are deciding upon the Climate previsions in 50 years from now.

Let’s be clear, we are not hoping much from this kind of talks, especially because these white-hair men are the one having the power, and deciding on what weather will be like when they won’t be there anymore to suffer from it. But today or main concen is that responsability towards Climate Change is not only generational, but also geographical. Today, Climate Change is already affecting populations in the south, provoking huge migration movements, leading to deaths of thousands, in the exact moment when the suit and ties men are having their banquet in Warsaw sponsored by BMW.

“Lack of action has not only resulted in socio-economic losses, but the devastating loss of hundreds of thousands of lives”

One year after the tragic speech of Filipino negotiator in Doha, it seems the Climate itself is entering the negotiations openly, to tell the negotiators to actually care. The super typhon Haiyan that caused more than 10000 deaths in the Philippines is now making headlines and should normally waken the negotiations, for a real change in the international climate policy. A young Green activist, Shenna Sanchez, FYEG activist and part of the COP 19 delegation in Warsaw, decided to join a fast in solidarity with other delegates and activists following the example set by the official Filipino negotiator, Yeb Sano.

Shenna Sanchez, said, “I will be fasting during COP19  together with some of delegates, who are in solidarity with my fellow Filipinos, horrified by this tragic loss. I would like to express my discontent and grieving through this fast. The failure of previous COPs to address both mitigation and adaptation strategies is to blame for the climate-induced disasters wrecking mainly the Global South. Disasters are not purely  “natural”, Human beings are also responsible for them . Lack of action has not only resulted in socio-economic losses, but the devastating loss of hundreds of thousands of lives. The fast is planned to continue until parties commit themselves, and contribute to genuine mitigation as well as adaptation measures e.g. GCF and to scale-up the long-term finance towards 2020.”

For Krassina Demireva, co-spoke person of the federation, the young European Greens ” stand in solidarity with the Filipinos in the wake of the tragedy caused by Supertyphoon Haiyan in the Philippines.  We cannot understand the positions of some states, which are unable  to move forward on climate negotiations. We demand that all parties  immediately sign up to concrete pledges to ensure carbon emissions are reduced – as well as agreeing to pay out the pledged amount to climate finance related to the concept of ‘loss and damage‘ .
Follow the young Green delegation in Warsaw in reading more in the Ecosprinter every day, and on facebook !