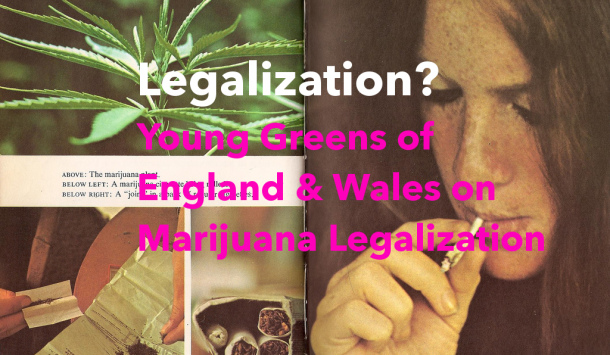 As Young Greens, we often get the reputation of being a bunch of teenagers who like get high and talk politics. Despite that this is largely an incorrect stereotype for many Young Greens across the world, it does speak true about one point. It has long been Green parties and their youth counterparts across the world that have lobbied for the legalization of marijuana. While this is a cornerstone for some groups in Europe, its not so celebrated in others.

So the Ecosprinter asked Young Green groups across Europe about their stances on marijuana legalization. Next in the series we go to the land of the crumpet- England and Wales. Could the prices of university tuition be not the only thing that are high in the near future for the young people of England and Wales?

As with all policies, we follow the main Green Party’s policy on marijuana. That policy is as follows: Cannabis would be removed from the 1971 Misuse of drugs act. The possession, trade and cultivation of cannabis would be immediately decriminalised, roughly following the Dutch model. The trade in Cannabis would be the subject of a Royal Commission (see below), with a view to establishing a fully legalised, controlled and regulated trade. Small-scale possession of drugs for personal use would be decriminalised.

The Green Party and the Young Greens favour an evidence-based approach to drugs policy. It is clear that the ‘war on drugs’ in this country is not working, and is costing us billions of pounds a year. There is clear evidence that marijuana has medicinal properties and, too, that it is less harmful than tobacco smoking – making it ridiculous that those who use it for medicinal or recreational purposes are criminalised. Decriminalisation would make recreational marijuana use less appealing, and would take business and money from the black market.

The Green Party are the most vocally pro-legalisation party in the UK, and it’s a policy that many voters are well aware of. Caroline Lucas has recently been leading calls for a review of current drugs policy, which many politicians have got on board with. This is an area where not only is our policy popular, it has also been central to debates around drug use and legalisation.

The UK’s laws on marijuana and other drugs has been generally constant since the 1971 Misuse of Drugs act. Drugs policy has not been properly reviewed since then, despite evidence that our laws don’t work. It makes sense to move on from this punitive approach to an evidence-based one.